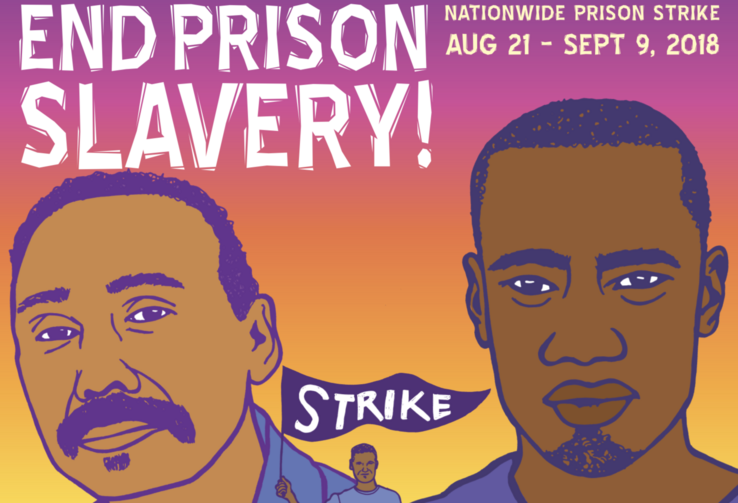 A national prison strike has entered its second week with reports of various degrees of participation scattered among incarceration sites around the country. It is of course not easy for people behind bars to organize a work stoppage from within prison walls, much less publicize one, so it is not clear how widespread the strike is proving to be. But organizers on the outside say the national strike has been a success.

It may be so, but no one will be declaring victory anytime soon. Unraveling conditions of labor exploitation and violence behind bars, whether administered, as some charge, by the state or between and among inmates themselves, will require a determined and broad reform of policies and conditions of incarceration in the United States.

The 2018 prison strike was called, organizers say, in response to a bloody prison riot at the Lee Correctional Institution, a 1,785-bed prison in rural South Carolina, that resulted in the death of seven inmates. Strike leaders charge that it was overcrowding, underfunding and a dearth of rehabilitative interventions that led to the violence at Lee.

Strike leaders charge that it was overcrowding, underfunding and a dearth of rehabilitative interventions that led to the violence at Lee Correctional Institution.

In a press statement released on Aug. 28, organizers said: “As the continued prisoner-on-prisoner violence within prisons over the past week suggests, the people who run the U.S. prison system have not yet made the necessary changes to stop the violence they produce behind the walls. These are changes which are necessary to ensure that prisoners are safe, that they have can have hopes and dreams for the future, that they can build towards redemption, rather than being condemned to a slow death inside a concrete box.”

Organizers report that inmates in at least 17 states planned to join the protest. It began on Aug. 21 and will conclude on Sept. 9.

One of the faith groups endorsing the protest is Washington’s Quixote Center. “We have a tendency in society to just throw people behind bars, dehumanize them completely” and then forget about them, Tom Ricker, a program associate with the Quixote Center, says in an interview. But in his work with re-entry programs with former inmates, the dignity and humanity of the former prisoners is clear, he says.

There are some reports that migrants detained under more aggressive Trump administration policies may also be joining the strike.

“They’re just saying, ‘No, we’re human beings and we have rights. We have a right to have some say in our lives; we don’t just have everything thrown away [because we’re behind bars].’

“Everyone still needs to be treated as a human being,” Mr. Ricker adds, arguing that current conditions at many institutions challenge the seriousness of the nation’s presumed commitment to the rehabilitation of its prisoners.

Individual prison strikes may have additional localized grievances to air, but the broad movement is seeking redress on 10 national demands. Among them, “immediate improvements to the conditions of prisons and prison policies that recognize the humanity of imprisoned men and women”; an immediate end to “prison slavery”; proper channels for the adjudication of inmate grievances; the broad restoration of voting rights and programs for rehabilitation and education; and the end of “racial overcharging, over-sentencing, and parole denials of Black and brown humans.”

There are some reports that migrants detained under more aggressive Trump administration policies may also be joining the strike. That would not surprise Mr. Ricker. He points out that some of the same for-profit corporations run both mainstream incarceration sites and migrant detention centers, so “there is obviously going to be a lot of overlap between detention practices.”

Many work for on average $.20 an hour, according to criminal justice watchdog the Marshall Project.

As both literally a captive market and labor force, prisoners across the country have to accept working conditions that would be unimaginable on the outside. Many work for on average $.20 an hour, according to criminal justice watchdog the Marshall Project. At the same time they are often subject to exorbitant markups on personal products at prison commissaries and one life-saving "good," the ability to communicate by phone or internet with family and friends on the outside, is often grossly overcharged, according to Mr. Ricker.

You have heard it said: Visit the imprisoned. But what about their guards?
Eve Tushnet

Because of such practices and policies, inmates can be “smashed to the ground” by their prison experiences, he adds, “and then we’re surprised when they end up back in prison” after probation or parole, unable to adjust to life outside after their release. A Bureau of Justice Statistics report finds that about two-thirds (67.8 percent) of released prisoners were arrested for a new crime within 3 years, and three-quarters (76.6 percent) were arrested within 5 years.

One demand of the current strike—the end to “death by incarceration” or “any sentence without the possibility of parole”—would likely find a strong backer in Pope Francis. The pope has made headlines recently by pressing a change in church catechism that denounces the use of the death penalty as morally “inadmissible” for Catholics, but he has in the past also frequently expressed misgivings with what he has called the “hidden death penalty” of life sentences without the hope of parole.

As Labor Day approaches, the Incarcerated Workers Organizing Committee has issued a call to action for supporters on the outside to express solidarity with striking inmates through encampments and demonstrations near incarceration sites that are participating in the strike.

I support the incarceration of people who commit crimes to protect society. However, as a retired Special Education , I agree that rehabilitation services to teach imprisoned men and women how to again function in society are crucial. I also believe that prison sentences should match the seriousness of the crime. For instance, people who have been found guilty of violent crimes (including murder and rape) should serve much longer sentences than those convicted of nonviolent offenses. For many years, I 've been a pen pal with a man serving life imprisonment. From our correspondence, I'm convinced that my friend, who is a devout Jehovah's Witness, has sincerely reformed his life. I was shocked to learn that many inmates work for such extremely low wages. Such wages (an average of 20 cents an hour) make imprisoned people virtual slaves. Aren't there any state (or better yet) federal laws which require that inmates be paid a fair wage based on the type of labor required of them? My friend who's imprisoned has more than once mentioned that because of the varying quality of the food served, that he receives supplements of healthy food from his wife when she's able to visit. I also occasionally send him modest sums for his personal needs. As a long-time pro-life activist, for many years I've opposed deliberately killing people imprisoned by capital punishment. Finally, I believe that people sentenced to life imprisonment should be released early on a case-by-case basis.

Let me see.
All inmates of prison have been chased, tried and convicted at great expense to the public purse. They stole or damaged persons or property or businesses, spoiled lives; left corpses or persons maimed in body, mind and spirit in their wake.
They cost an enormous amount of money to cage and control. Their very existence and behaviour forewarning society that others might do the same causing standing police forces, special forces and a whole panoply of legal institutions.

The most merciful, generous approach to that destructiveness and burdening of the society is to have them work 40 hour weeks for bed and board. No perks, no luxuries, no amenities as if they were innocent and just different.

Imprisonment as punishment is the most merciful way of dealing with criminals.
All the nonsense about penitence, correction, reform is just idealistic irrationality, blind to the harm and evil of criminal behaviour.

I would appoint an investigation to discover if this uproar is part of the Muslim infestation of the society being undermined before being conquered.

Non-Muslim response here. So, you are proposing a kind of judicial slavery?