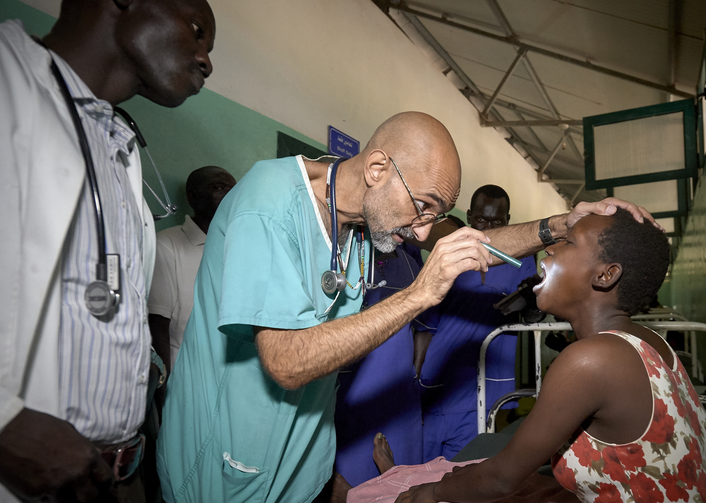 Dr. Tom Catena, a Catholic lay missionary from the United States, examines a patient during rounds in late April at the Mother of Mercy Hospital in Gidel, a village in the Nuba Mountains of Sudan. The Catholic hospital, at which Catena is often the only physician, is the only referral hospital in the war-torn area. (CNS photo/Paul Jeffrey)

NUBA MOUNTAINS, Sudan (CNS) -- A U.S. physician who has won accolades for his service in a war-torn corner of Sudan said he has just done what any missionary is called to do.

"I'm a lay missionary. We're supposed to show the face of Christ to people, but how can you do that if you take off when the going gets tough?" asked Dr. Tom Catena, a 54-year old physician from Amsterdam, New York, sent by the Catholic Medical Mission Board to run the Mother of Mercy Hospital in Gidel, a village in the isolated Nuba Mountains.

In 2011, fighting between rebel Nuba forces and the central government in Khartoum grew particularly fierce. The area around the church-run hospital began to experience intense bombing by the Sudanese Armed Forces. Bishop Macram Max Gassis, then the bishop of El Obeid, which includes the Nuba region, ordered all foreign church workers, including Catena, to leave. The bishop sent three planes on a daring mission to evacuate the foreign staff, most of whom were contracted teachers and nurses from Kenya and Uganda.

Catena was among a handful who said no.

"My organization was getting nervous. They had someone in Juba assessing the situation who said it was too dangerous, so I would have to leave. I said I wouldn't go. They said if I didn't leave they would terminate my contract. I said ok," Catena told Catholic News Service.

“The way I saw it was that if I left, that tells the people here that my life is more valuable than theirs. And I don't believe that. That's not how Christ was, he gave his life for everyone.”

"We made up in the end, but the way I saw it was that if I left, that tells the people here that my life is more valuable than theirs. And I don't believe that. That's not how Christ was, he gave his life for everyone. And we're supposed to follow Christ. So how can we take off in the middle of a crisis?"

"We knew the consequences if we left, because the wounded were coming in right and left. There was no way we could leave. Many of the other staff stayed as well, so I wasn't by myself," he said.

Catena said that years earlier, before he arrived, the area had been subjected to heavy shelling and bombing, but pastoral workers had stayed put.

"You get a lot of credibility when people see you sticking around, see you eat what they eat and share the same fear they experience. It's a huge witness. It speaks more powerfully than any preaching can do," he said.

Sister Angelina Nyakuru, a Comboni sister from Uganda, heads the hospital's nursing staff. She and Catena both came to Gidel to open the hospital in 2008. She said Catena's courage proved infectious several times.

"In 2015 there were rumors that northern soldiers were just 30 kilometers (19 miles) away and moving toward us. You could hear the big artillery. It was frightening. Everyone on the staff decided to leave, but Dr. Tom put up his hands and said he wouldn't go.

"So I told the sisters I wouldn't leave either, Sister Nyakuru said. "All the sisters stayed, and one priest. Everyone else relocated across the border for two weeks until things calmed down. His calm commitment encouraged the rest of us. Every time something happened Dr. Tom was ready to sacrifice his life."

Catena is not just the only surgeon for a million people. He's the director of a 435-bed hospital wrestling with staff discontent about stagnant salaries and the technological challenges of practicing medicine in one of the poorest corners of the planet (the hospital just got its first x-ray machine). In rare moments of candor, he rants about the international agencies that won't enter the Nuba Mountains because they're afraid of incurring the wrath of Omar al-Bashir, Sudan's president and an indicted war criminal.

Catena's passion and commitment have brought him attention from the outside world, including last year's Aurora Prize for Awakening Humanity. He's the subject of a recently released documentary film, "The Heart of Nuba." And Nicholas Kristof, writing in The New York Times, quoted a local Muslim leader who called Catena "Jesus Christ" because he heals the sick and helps the blind see.

For some, the world's focus on Catena is unfair.

"Tom is a hero. He has given 10 years of his life to the people of the Nuba, and he's a rock star in that hospital," said John Ashworth, a former Mill Hill missionary priest who serves as an advisor to the Catholic bishops in Sudan and South Sudan.

"But there are lots of heroes there, hundreds of heroes, yet they are not white and they're not American. They are Africans, and they all have interesting stories, but the journalists aren't interested in them," Ashworth told CNS.

"I've never asked anyone to come here and interview me. But if people come, fine. If I can be the one to get the message out, to show another face of the church and the good it's doing in the world, then let me give it a shot," he said.

"And I haven't been alone. The sisters never left. The priests didn't leave. The Nuba nurses and other incredible hospital staff didn't leave. But when I tell that to a journalist, they often respond, 'They're from Africa,' as if Africa was just one country. They want to write about the 'khawaja' (a local Arabic term for white man) from the United States, because that's what people in the U.S. want to read about. Otherwise nobody cares."

At the end of the day, Catena said he just wants people to care.

"One way I've tried to get comfortable with the attention," he said, "is to believe I've been given a chance to show both how the Nuba are suffering, as well as the great work that the Catholic Church is doing here."