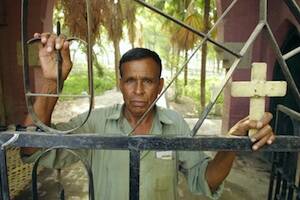 Christians and other minority groups in Pakistan have been warned to be on their guard in the wake of the killing of Salman Taseer, governor of Pakistan’s Punjab Province. Auxiliary Bishop Sebastian Shaw of Lahore said that across Pakistan people were “shocked and horrified” by the assassination on Jan. 4. The late governor had been a critic of Pakistan’s controversial blasphemy law. Bishop Shaw said he was calling on the faithful to avoid public comment or action that could be misinterpreted and used to justify acts of violence and intimidation. “All of our people need to be very careful. Saying anything can incite the mob. We must not live in fear. We must have faith in God. But if we go on the streets to express ourselves at this time, it will create a negative reaction.” Pakistan’s blasphemy law has been increasingly criticized as a pretext for violence and intimidation of minority groups, particularly Christians.