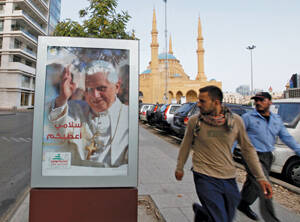 When Pope Benedict XVI stepped off the plane in Beirut on Sept. 14, he said he had come to Lebanon, and to the Middle East in general, as a “pilgrim of peace.” In five major talks over the next three days, the pope repeatedly called for peace and underscored the role of Christians in promoting it. Yet his most eloquent message of hope to the troubled region lay not in the diplomatic language of his public statements, but in his very presence and the response it evoked from his hosts.

Throughout his trip, Pope Benedict limited himself to general statements of principle on the most contentious political issues, and he avoided some topics altogether. His insistence that religious freedom is a basic human right and a prerequisite for social harmony was a bold statement to make in a region where most countries restrict and even prohibit the practice of any faith other than Islam. But like the document he came to Lebanon to present, a collection of his reflections on the special Synod of Bishops in 2010, the pope said nothing specific about where and how the region’s Christians are regularly deprived of that right.

The pope twice deplored the human cost of the civil war in neighboring Syria, but his only practical recommendation for an end to the fighting there was a neutral call to end the importation of military arms, which he called a “grave sin.” Pope Benedict said nothing at all about the incendiary subject that dominated news coverage in the run-up to his trip: an American-made anti-Islamic film that had inspired often-violent protests in at least a dozen Muslim countries, including Lebanon. Awareness of that furor no doubt heightened the caution with which the pope treated the most volatile topics during his trip. Ironically, the crisis may also have helped him to get his message across.

For the Lebanese, the pope’s willingness to carry out his planned visit in spite of security concerns powerfully underscored his commitment to the country and the region. “The mere fact that the Holy Father came at this difficult moment is an indication that Christians here are not forgotten,” said Habib Malik, a professor of history at Lebanese American University.

Back in Rome, on Sept. 19 Pope Benedict XVI said his three-day trip to Lebanon convinced him that now is the time for Christians and Muslims to bear witness together against violence and in favor of dialogue and peace. In Lebanon, he said, Muslims “welcomed me with great respect.

“I believe the time has come to give a sincere and decisive witness together against divisi ons, against violence and against war,” the pope said at his weekly general audience.

During a ceremony at the Melkite Catholic Basilica of St. Paul in Harissa, Lebanon, on Sept. 14, Pope Benedict signed the 90-page document of his reflections on the synod, which was dedicated to Christians in the Middle East. A section dedicated to interreligious dialogue encouraged Christians to “esteem” the region’s dominant religion, Islam, lamenting that “both sides have used doctrinal differences as a pretext for justifying, in the name of religion, acts of intolerance, discrimination, marginalization and even of persecution.”

Yet in a reflection of the precarious position of Christians in most of the region today, where they frequently experience negative legal and social discrimination, the pope called for Arab societies to “move beyond tolerance to religious freedom.”