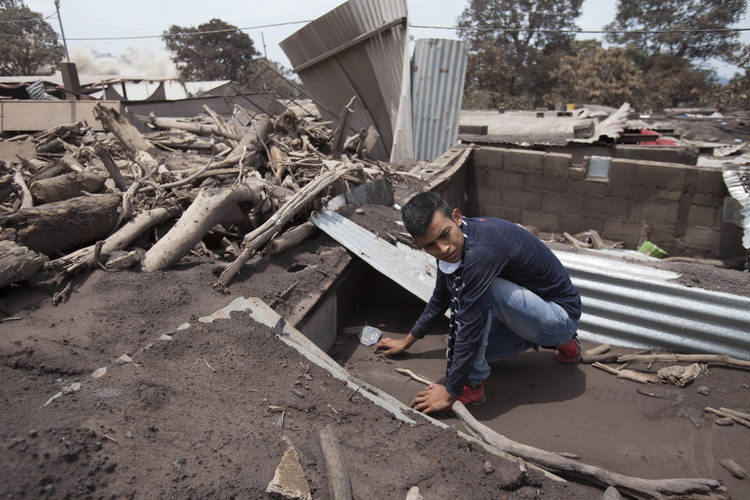 Bryan Rivera sifts through the remains of his house, after his family went missing during the Volcan de Fuego or "Volcano of Fire" eruption, in San Miguel Los Lotes, Guatemala, on June 7. (AP Photo/Moisés Castillo)

Vidalina Sutuk has lived on the slopes of the Fuego volcano in Guatemala for the past 15 years. She is used to feeling the earth tremble from time to time. But on June 3, as Fuego erupted, she was terrified to see first black and then red smoke racing toward her community of Don Pancho.

“I started praying to God that nothing would happen to us,” she said. She saw three lightning strikes on the summit of the volcano—a common phenomenon during large eruptions—and ran inside her home.

“The smell was worse inside the house, but where were we going to go?” Ms. Sutuk said, speaking to America in Palin, Escuintla, one of the hardest-hit departments of Guatemala. As conditions worsened, she soaked a handkerchief and placed it over her young son’s face, and then covered his body with a blanket and told him not to move.

“It started to pour rain. The earth was shaking,” Ms. Sutuk said, shaking her fists. “It was pom-pom-pom,” she says, describing the sound of the boiling ash and rocks roaring down the slopes of the volcano. “I started to pray: Dear God, please don’t let it come here.”

Ms. Sutuk and the 82 other families from Don Pancho eventually managed to escape because of the course that a volcanic lahar—a mudslide-like flow of ash and other debris—took, following a nearby river away from the community. But the lahar brought complete devastation to San Miguel Los Lotes, now reportedly under three meters of debris and white dust. Official reports as of June 25 put fatalities at 112, with 197 still missing, but many believe the real death toll is significantly higher.

Jovita Tzul is a human rights lawyer who works with the Indigenous Peoples’ Law Firm. She was consulted on the national census in Guatemala that is scheduled to be completed in July, the first in more than 15 years. “The statistics we find will help us understand how many people were killed in the Fuego volcano disaster,” she said. “Nevertheless, the numbers could be manipulated because in the end, it’s the state that is responsible for the data.” The Electoral Court confirmed on Friday that 2,181 people were registered to vote in the five communities that were destroyed by the eruption, though the state has not provided any official numbers of people living in the communities.

Andrea Ixchíu Hernández, a Maya K’iche’ woman and indigenous rights activist, has traveled to the affected communities to report on the rescue effort; she said that the Electoral Court numbers are also too low.

“In the communities of El Rodeo and [San Miguel] Los Lotes, there were 10,000 electricity consumption meters,” she noted. “There could be thousands [of dead].”

Ms. Tzul said the government of Guatemala has a history of denying the existence of indigenous communities.

“If they have denied them, and their rights, in life, why wouldn’t they deny them in death?” she asked.

“If they have denied them, and their rights, in life, why wouldn’t they deny them in death?”

The public institutions responsible for responding to natural disasters have come under fire since the eruption. Despite warnings from scientists at the National Institute of Seismology, Volcanology, Meteorology and Hydrology in the early morning on the day of the eruption, the National Coordinator for Disaster Reduction failed to issue a red alert and evacuate communities.

The University Students’ Association and other groups held a candlelight vigil and march to remember the victims, demanding the resignation of President Jimmy Morales for poorly handling the crisis. And Guatemala’s newly appointed attorney general, Consuela Poras, has announced that her office will investigate whether state officials “activated the necessary protocols to take prudent and opportune decisions.”

Guillermo Vasquez Escobar, now with the International Red Cross, has spent 15 years as a forensic analyst, working to bring the remains of the 200,000 killed in Guatemala’s internal armed conflict with their families. “On Sunday I woke up late and I didn’t imagine the magnitude of the tragedy until much later. No one could,” Mr. Vasquez Escobar told America in Guatemala City. That night he got a message that the Red Cross should prepare for an emergency.

“I think there were more than 50 in the first days,” said Mr. Vasquez Escobar, referring to the bodies that were retrieved by emergency rescue workers. Three days later, the government called off the search-and-rescue mission, and images surfaced of desperate families using pickaxes to uncover loved ones buried up to 13 feet below in the still-burning mix of volcanic ash, mud and rocks. “When the families started finding the bodies is when [the bodies] started coming in parts,” said Mr. Vasquez Escobar.

In San Juan Alotenango, one of the towns where victims have sought refuge, parishioners have opened their homes to people who do not want to stay in state-run shelters, now being managed by the military on the order of the president. Ms. Sutuk told America that residents of these shelters are allowed out for only two hours a day. That was the reason she and her family decided to return to their community, even as the Fuego volcano continues to rumble.

Images surfaced of desperate families using pickaxes to uncover loved ones buried up to 13 feet below in the still-burning mix of volcanic ash, mud and rocks.

Ms. Tzul confirmed her experience. “They [the military] practically have people detained in the shelters,” she said, likely so that family members do not organize searches for the missing.

Ms. Sutuk, like the majority of the people in her community, is Kaqchikel, members of an indigenous Mayan group. Originally from Chimaltenango, she came with 40 other families to the department of Escuintla in the early 2000s in search of land. At the time, Guatemala was hard hit by a collapse in the price of coffee on the global market. The Guatemalan Land Fund bought coffee plantations and resold the land to subsistence farmers.

Ms. Sutuk and her husband, Felipe Suquita, told America that the Kaqchikel families that would comprise the Don Pancho community bought approximately 370 acres of land for close to $400,000, a debt the community carried for 10 years before finally being able to pay it off. She said the state officials who brokered the transaction never informed them of the risks of living near the active volcano and never prepared them for how to respond in case of an eruption.

Kaqchikel families said state officials never informed them of the risks of living near the active volcano and never prepared them for how to respond in case of an eruption.

A 2016 report by the United Nations University Institute for Environment and Human Security looked at 171 countries and examined their potential climate disaster risks and government response capacity. According to the report: “The risk of a natural event turning into a disaster always depends only partly on the force of the natural event itself. The living conditions of the people in the regions affected and the options available to respond quickly and to provide assistance are just as significant.”

It found Guatemala to be the fourth least able to respond, based on the lack of critical infrastructure and the delays that would mean in delivering aid. “Those who are prepared, who know what to do in the event of an extreme natural event, have a greater chance of survival,” according to the report.

Just over a month before the Fuego volcano erupted, the 2018 Humanitarian Allied Forces even simulated a volcano eruption and a response to the disaster. At the time, Army Colonel Juan Carlos De Paz, spokesman for the Guatemalan Ministry of Defense, released a statement that “We were able to measure our response capacity and the protocols activated and verify that we have good response capabilities.”

But in the reality following the actual eruption, “People in the [military] shelters don’t even have minimal conditions to feel at ease while they’re there,” said Ms. Ixchíu Hernández. Many have turned to Catholic parishes for help. The San Juan Bautista parish has been providing food, clothing and medical attention. They have also been coordinating with Protestant churches to hold wakes for the dead. Parishes throughout Guatemala have launched fundraising drives for the victims, with some promising to help rebuild homes when conditions permit.

Bishop Gerardi was killed 20 years ago in Guatemala. The search for justice continues today.
Jackie McVicar

“This is the call of the church,” said Ms. Ixchíu Hernández. “To preach with action, with solidarity, with help, with respect for people and human life.”

Days after the eruption, the Episcopal Conference of Guatemala released a statement expressing their profound concern for their Guatemalan brothers and sisters who had “lost their loved ones, their material goods and their tranquility.”

The conference said that they are “aware that this tragedy adds to the already difficult political and social situation in the country and aggravates the poverty and the difficulties of survival in which the majority of the population lives.” They added, “we hope that the government of Guatemala will fulfill its obligation to give concrete and integral answers.”

For people like Ms. Sutuk, whose home was not destroyed but who lives now in constant fear of the volcano, a long-term solution would mean resettlement. In the meantime, her community of subsistence farmers, whose crops have been destroyed, is living day to day.

For those who continue to look for the missing, Mr. Vasquez Escobar said there is a relatively small team working in the morgue. “What’s hard to understand is that this isn’t work you can do quickly,” he said. “It’s not one day to the next. I understand the desperation of the families...But it’s a slow process.” And if the state declares the buried communities as cemeteries, as it has done in other disasters, exhumations will become even more difficult.

“The morgue never stops working...Not a day has gone by that we haven’t done something. It’s a professional and meticulous job that takes time. It will take time, but the majority [of the victims] will be identified.”

The “reality following the actual eruption” is that Guatemala’s military did their job swiftly and effectively. They have evacuated more than 12,800 people and served over 8,000; government shelter is not comfortable, but in a crisis the needs of life outweigh the wants. To shelter 3,500 people sadly means minimal luxury. Give the military credit it deserves.

This article also appeared in print, under the headline “Death toll from Fuego eruption in Guatemala may far exceed the official count ,” in the July 23, 2018, issue.