Bishop Gerardi was killed 20 years ago in Guatemala. The search for justice continues today. 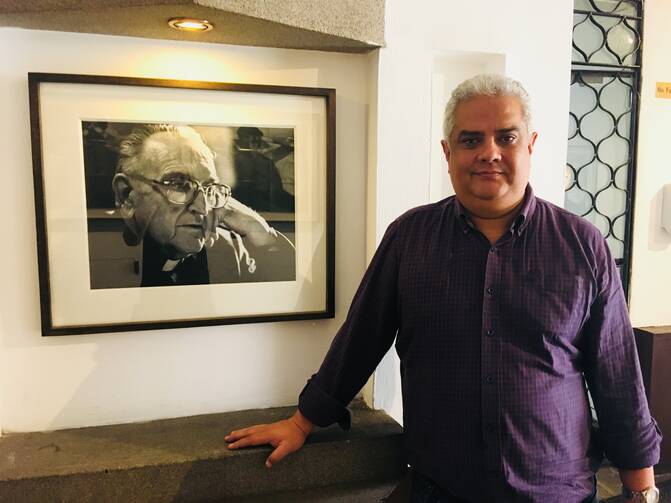 Nery Rodenas, director of the Human Rights Office of the Archdiocese of Guatemala, stands beside a portrait of Bishop Juan José Gerardi. (Jackie McVicar)

“Monsignor Gerardi was a person who didn’t only relate with people in the poorest regions, not only with those most excluded,” says Nery Rodenas, but who also “sought reconciliation, peace and to recognize the truth in Guatemala.”

Mr. Rodenas is the director of the Human Rights Office of the Archdiocese of Guatemala (ODHAG), situated in a large stone building with heavy wooden doors near the Metropolitan Cathedral of St. James. Outside, the names of thousands of victims of Guatemala’s genocidal conflict, most of them indigenous Mayans, grace the pillars. Inside, pictures of Juan José Gerardi Conedera are scattered around the office. The presence of the Guatemalan bishop, assassinated in 1998, accompanies you from the moment you walk through the door.

Bishop Gerardi “was deeply connected to communities…. He saw directly how they were affected by the war,” says Mr. Rodenas. “How they were massacred. How the Catholic priests, catechists and nuns were also persecuted. It was necessary for him to contribute to the reconstruction of the social fabric.”

He headed the Inter-diocesan Project to Recover Historic Memory, which documented the violence against the civilian population during Guatemala’s 36-year war and the genocide of the country’s majority indigenous population. Twenty years ago it released its groundbreaking report “Guatemala: Never Again.” It paved the way for the United Nations–sponsored Historical Clarification Commission, created as part of the 1996 peace process.

The report documented more than 400 massacres in Guatemala; it was the culmination of thousands of testimonies and years of research by Bishop Gerardi and his team. Two days after the report was presented in the Metropolitan Cathedral, attributing 93 percent of the violence during the time of the war to the Guatemalan military, Bishop Gerardi was bludgeoned to death in his home.

Bishop Gerardi’s report documented more than 400 massacres in Guatemala, almost all attributed to the military.

Four people, including three military officers, were convicted of the murder in 2001. Capt. Byron Lima Oliva was eventually sentenced to 20 years in prison, but by 2014, when he was accused by the U.N.-backed International Commission Against Impunity in Guatemala of running an organized crime ring from prison, he was one of the most powerful men in Guatemala.

Two years later, Mr. Lima Oliva was killed in a prison attack, allegedly by a rival within the prison, though his family denounced the murder as a “crime of the state.” Mr. Lima Oliva had reportedly started to talk about the involvement of the son of Álvaro Enrique Arzú Yrigoyen, who served as president of Guatemala from 1996 through 2000, in the Gerardi murder and other cases of corruption involving the government.

This past fall, Alejandra Reyes, the widow of Mr. Lima Oliva, spoke under oath as a protected witness in hearings related to Mr. Arzú’s misuse of municipal funds and confirmed the ongoing relationship between her late husband and the Arzú family. Two weeks ago, the Guatemala news outlet Emisoras Unidas reported that Special State Prosecutor Jorge Garcia Mazariegos was leaving open the possibility of new charges against those who instigated Bishop Gerardi’s murder. On April 27, Mr. Arzú died following a heart attack while playing golf; his son, Alvaro Arzú Escobar, enjoys political immunity after his controversial election as president of the Guatemalan Congress in January.

Since the 1998 murder of Bishop Gerardi, a series of important cases have involved former military officers in Guatemalan criminal courts. The most noteworthy was the 2013 trial and conviction of former military dictator and de-facto president Efraín Ríos Montt for genocide. He was sentenced to 80 years in prison in 2013.

Ten days later, the Constitutional Court accepted an appeal, forcing a new trial against Mr. Rios Montt and his former head of military intelligence, José Mauricio Rodríguez Sánchez. The new trial eventually opened in October 2017 but had not concluded by the time of Mr. Rios Montt’s death on April 1.

“Many people didn’t think we would get this far... The sentence on May 10, 2013, surpassed our expectations,” said Edwin Canil, genocide survivor and current president of the Association for Justice and Reconciliation, which represents the indigenous Maya victims of the conflict. “The small spaces of hope within the system made way for a sentence. And no one can take that away.”

“The small spaces of hope within the system made way for a sentence. And no one can take that away.”

Mr. Canil studied law and previously worked with the Center for Human Rights Legal Action, an organization dedicated to justice and reconciliation in Guatemala and at the forefront of the genocide case. “Guatemala has a political commitment to the international community since the signing of the Peace Accords to seek out and bring to justice those responsible for serious human rights violations. [But] the state doesn’t want anyone to talk, to say anything. Those who end up being responsible to keep the memory alive are the victims, the survivors.”

When Mr. Rios Montt died, current Guatemala President Jimmy Morales and Mr. Arzú Escobal expressed their condolences over social media. But HIJOS Guatemala—the Sons and Daughters for Identity and Justice Against Forgetting and Silence—called for a gathering in Guatemala City’s Central Park.

“Those who end up being responsible to keep the memory alive are the victims, the survivors.”

“They say that because he was facing a second trial he died in impunity,” says Flor de Maria Calderon of HIJOS in an interview with America. “[But] we came to the park to remind people that he died convicted. He was at home in police custody….. History and memory will be responsible for remembering him [for] who he was—a man responsible for genocide.”

“Guatemala continues to be a deeply racist society because the state is profoundly racist. It is based on classism, racism, great inequalities,” says Ms. Calderon, standing near the cathedral where Bishop Gerardi presented the report “Guatemala: Never Again.”

“These ruptures—the death of a dictator, for example—give us the opportunity to see the face of the state and society and to use it as a mirror on ourselves.”

The genocide trial against Mr. Rodríguez Sánchez will continue. Other ongoing trials for crimes of the past include the “Creompaz” case in which military officers have been charged with disappearances, torture, sexual violence and extrajudicial execution. The Molina Theissen trial has been recounting the horrors of the torture and forced disappearance of political activists.

“Getting to know and hear the testimonies of the people affected by the war, Monsignor Gerardi drove forward this...project to recover historical memory. To give voice to those affected. It was a way for the Guatemalan Catholic Church to get close to the suffering of the people so that they could tell their truth,” says Mr. Rodenas.

Now, as much as ever, creating and maintaining spaces for truth and justice remains important in Guatemala. “There is still a lot to do,” says Mr. Canil. “We want to be part of a generation whose legacy is that we did something. Seeking justice and reclaiming history for so many crimes that have been committed against us as indigenous peoples.”

The Human Rights Office of the Archdiocese of Guatemala held commemorative events to mark Bishop Gerardi’s murder and the importance of “Guatemala: Never Again” throughout the latter part of April.

As with our Mexican brothers and sisters being gunned down recently, and those killed by ISIS - I always ask if these witnesses have been proclaimed martyrs? For us who believe in Jesus, the most horrific death is only a momentary gateway into paradise. Does Bishop Gerardi have a cause? Is it allowable to ask their intercession?