Pope Francis appeals for prayers ahead of the U.S.-North Korea Singapore summit

Pope Francis appeals for prayers ahead of the U.S.-North Korea Singapore summit 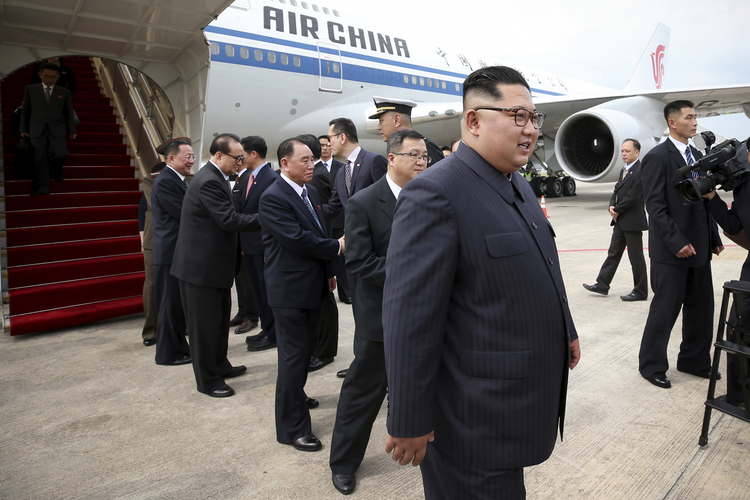 North Korean leader Kim Jong Un arrives at the Changi International Airport on June 10 in Singapore ahead of a summit with U.S. President Donald Trump. (Ministry of Communications and Information of Singapore via AP)

Pope Francis today asked pilgrims and believers worldwide to join him in praying that the historic summit meeting between the leaders of the United States and North Korea, scheduled for June 12, “may contribute to the development of a positive path that can assure a future of peace on the Korean peninsula and throughout the entire world.”

He said he wished to extend to “the beloved Korean people a particular thought in friendship and prayer.”

He then went on to invite believers worldwide and the thousands of pilgrims gathered in St. Peter’s Square at midday, June 10, to join him in praying for the success of the first ever face-to-face meeting between a sitting president of the United States and the leader of North Korea. “Let us all together invoke Our Lady, Queen of Korea, [that] she may accompany these talks,” he said. He then led all present in reciting the Ave Maria with him for the success of the summit.

As he was speaking, the North Korean leader, Kim Jong-un, was already in Singapore, and not long after he finished speaking, President Donald Trump flew in on Air Force One. There is immense interest in the summit not only in Asia, but across the world.

The Russian president, Vladimir Putin, expressed his appreciation that the summit was taking place and praised China for the role it has played in ensuring it would happen. Some 3,000 journalists from across the globe have arrived to cover the event.

Pope Francis and Vatican diplomats have followed with growing concern the grave tensions and even threats of nuclear attacks that have been exchanged between the United States and North Korea.

Pope Francis knows well the fragile and often dramatic political reality in the Korean peninsula where the country has been divided along the 38th parallel since the end of World War II. Its people have suffered tension and conflict ever since the Korean War (1950-53), which ended with an armistice, not a peace treaty.

He visited South Korea in 2014, where there is a vibrant Catholic community with some 5.5 million members—just over 10 percent of the South Korean population. At the end of that visit, he celebrated a nationally-televised Mass on Aug. 16 in the cathedral of Myeong-dong “for the peace and reconciliation” of the entire Korean people, many of whose families have been divided across the 38th parallel ever since 1945

In his homily, in the crowded cathedral, he invited everyone to “pray for the emergence of new opportunities for dialogue, encounter and the resolution of differences, for continued generosity in providing humanitarian assistance to those in need and for an ever-greater recognition that all Koreans are brothers and sisters, members of one family, one people. They speak the same language.”

Pope Francis and Vatican diplomats have followed with growing concern the grave tensions and even threats of nuclear attacks that have been exchanged between the United States and North Korea, a country of 25 million people with few Catholics, over the past year because of the North Korea’s effort to develop nuclear arms. He has watched the escalation of tensions between the two sides especially over the past 12 months or more, with bellicose verbal exchanges between Mr. Trump and Mr. Kim.

His decision last year to condemn even “the possession” of nuclear arms as “immoral” also resulted from this dramatic situation where the terrifying prospect of the use of nuclear weapons, even by accident, became every day more threatening to the peoples of Korea and the United States, but also to the wider world.

Sources say Pope Francis is praying that the historic summit can open the path to the denuclearization of the peninsula, and a permanent peace agreement between the two Koreas.

Oh, yes! Always pray for peace. Pray. Pray. Pray. Move the hearts of Your children and give them wisdom
to make the world better. This we pray. Always.

Mortal leaders are put on a pedestal to render humble service to creation. We need to pray and wish them strength and stamina.

I join Pope Francis in praying for peace between South and North Korea. I agree with him that dialogue is,crucial to resolve differences, and that humanitarian assistance for the impoverished North Korean people is essential. It will undoubtedly take time, but "denuclearization" of the Korean peninsula is a noble and worthwhile goal. However, also essential in my view is an end to the monstrous human rights abuses perpetuated by the Kim regime. According to the Washington Post ( June 11, 2018), Michael Kirby, chair of the U. N. Commission of Inquiry on Human Rights in North Korea, in a 2014 report described these abuses. The report noted that there were four compounds where between 80,000 and 130,000 people are held for life and "subjected to brutalities comparable to those in the Nazi concentration camps." These include subjecting inmates to deliberate starvation, forced labor, executions , torture, rape and forced abortion and infanticide. Tragically, Kim is continuing the dictatorial policies of his father and grandfather, living in luxury and awarding with luxury his elite followers, while repressing the rights and basic needs of the ordinary people of his nation.