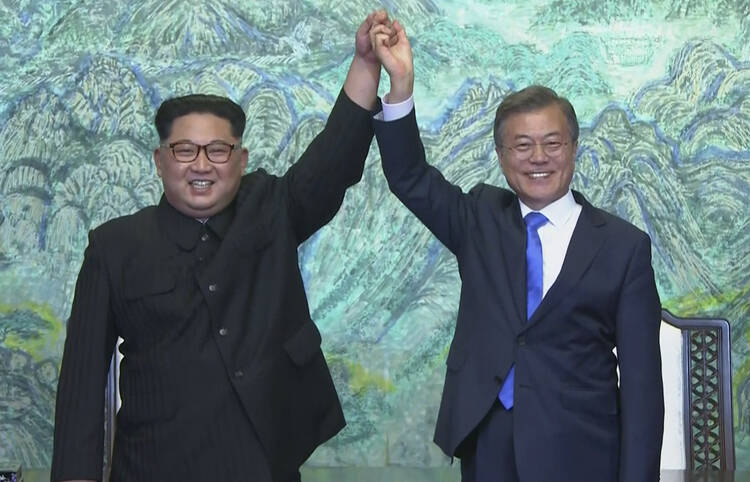 Recent developments on the Korean peninsula have inspired a degree of shock and awe in diplomatic circles from Washington to Beijing. South Koreans themselves have been mesmerized by the previously unimaginable spectacle of the smiling leaders of North and South Korea, Kim Jong-un and Moon Jae-in, and their hand-holding diplomacy across the Demilitarized Zone.

“It’s really astonishing for us to see what is happening these days,” Bishop Peter Kang U-il confirmed via e-mail. “We never imagined things would develop so fast.” Bishop Kang, a former president of the Catholic Bishops’ Conference of Korea, leads the diocese of Cheju.

Average Koreans may be gob-smacked by the unanticipated pace of the improving relations, but they hope follow-up negotiations and a much-anticipated meeting between U.S. President Trump and Kim Jong-un will keep the diplomatic momentum going, he said.

Developments on the Korean peninsula have inspired a degree of shock and awe in diplomatic circles.

Some in the United States give much of credit for the new opening on the peninsula to the Twitter-diplomacy (or more accurately lack thereof) conducted by Mr. Trump. It may be the only time denigrating another world leader as “rocket man” has led to a diplomatic coup. Some are even arguing that Mr. Trump should receive the Nobel Prize for Peace for—somehow—bringing the Korean leaders together. Bishop Kang had been critical of Mr. Trump’s approach to Mr. Kim in the past, which he considered unnecessarily provocative.

Now, he would only say, “Many Korean people have an impression that Mr. Trump is an unpredictable person, but they are also ready to bet on his rationality and common sense.”

As talks of a non-nuclear North and a trilateral peace treaty raise expectations, the skeptical in South Korea point out that Northern leaders have reneged before on promises of better behavior and the denuclearization of the peninsula.

Some are arguing that Mr. Trump should receive the Nobel Prize for Peace for bringing the Korean leaders together.

“However, many people seem to feel this time there have been fairly different signs in Kim Jong-un’s behavior and his way of expression,” Bishop Kang said. He cited a recent public opinion poll in South Korea that tracks a significant change of heart in the South regarding Mr. Kim.

Immediately after the historic meeting in the DMZ truce village of Panmunjom, 65 percent of South Koreans say they trust the sincerity of the North Korean leader regarding his desire for peace; almost half of even conservative Koreans say they accept Mr. Kim’s sincerity, according to the bishop. “It’s a radical change,” he said. “Most South Korean people don’t seem so suspicious about the intention of Mr. Kim, listening and watching his sincere attitude [during meetings with Mr. Moon].”

The church in the South will attempt to capitalize on the improving cross-border mood.

Mr. Kim’s decision to send “his own sister, his most trusted person,” to the Winter Olympic Games appears to have begun the warming trend among people in South Korea.

Bishop Kang said the church in the South will attempt to capitalize on the improving cross-border mood by continuing its outreach efforts to the North. It has been offering humanitarian assistance for more than two decades, he said.

What comes next for the Koreas? “The two leaders of the South and the North already pledged to work toward establishing a peace treaty to formally end the Korean War,” Bishop Kang said. Mr. Moon has even offered to include the North in a joint economic development program with the aim of accelerating trade with the European Union, Russia and China and “taking advantage of railroad connection” between the two Koreas. That possible integration “would certainly improve North Korea’s economy as well as the South and bring a lot of cultural exchange,” Bishop Kang said.

Is it all happening too fast? Bishop Kang does not think so. Most in the South “don’t seem nervous” about the sudden progress on peace. “They have waited so long for it,” he said. Even the skeptical young who had been “generally rather negative” to the idea of reunification with the North are now talking about their growing expectations for change on the peninsula—not least of which “the day when they would be free from [military] enlistment.”

We will see what actually happens. North Korea has a track record of deception.

I think the two Korean presidents are joining forces against trump's bombastic diatribes. I give him no credit for their improved relations.

But ironically you just did give him credit.

Actually, a lot of the impetus for the summit came from the people of South Korea, and particularly from faith-based peace activists who have been advocating a peace treaty and improved relations with North Korea for years. In 2016, a delegation from the South Korean Council of Churches visited the US to lobby the Obama Administration on behalf of a peace treaty. It is hard to know how much President Trump influenced events on the Korean peninsular but it is clear that in both Pyongyang and Seoul, domestic Korean considerations played an important role.

We in the U.S. think of the two Koreas a two states, but Koreans think of themselves as one nation in the sense of one people, and there is strong sentiment for better relations, more contacts across the DMZ and eventual reunification of the North and South.

I was unaware that South Korean peace activists and the South Korean Council of Churches have been working hard to secure a peace treaty between North and South Korea, which is commendable and admirable. It also is good that the Catholic Church in South Korea has been providing humanitarian assistance to the people of North Korea, who are often suffering a lack of religious freedom, as well as economic deprivation and the struggle of being ruled by an unpredictable dictator. I think it would be beneficial if the two leaders signed a peace treaty to formally end the Korean Conflict. Kim has certainly made efforts to be friendly to President Moon. I also hope that the two nations can cooperate in terms of trade and cultural activities. The fact that I believe the North Koreans joined the South Korean athletes at the Olympics was undoubtedly encouraging. While in many ways I feel hopeful, Kim has broken other agreements regarding denuclearization. Also, the fact that he has essentially a personality cult, and that there is no religious freedom or civil rights, are significant barriers to peace in my opinion. It's also a good sign that both nation's believe that they are one nation in cultural terms despite the decades of national separation. My late Dad served in the Navy during the Korean Conflict, and opposed having a United States military presence in South Korea. I have mixed feelings about our military presence. On the one hand, ideally we will be able to withdraw our troops. However, South Korea has long been one of our allies, and I am fearful about what the meracurial Kim might do to the people of South Korea if our military withdraws. We can only hope for the best.

The world will have to give one giant applause to President Trump for doing the impossible. Onward to glory. God Bless our President and God Bless the USA.