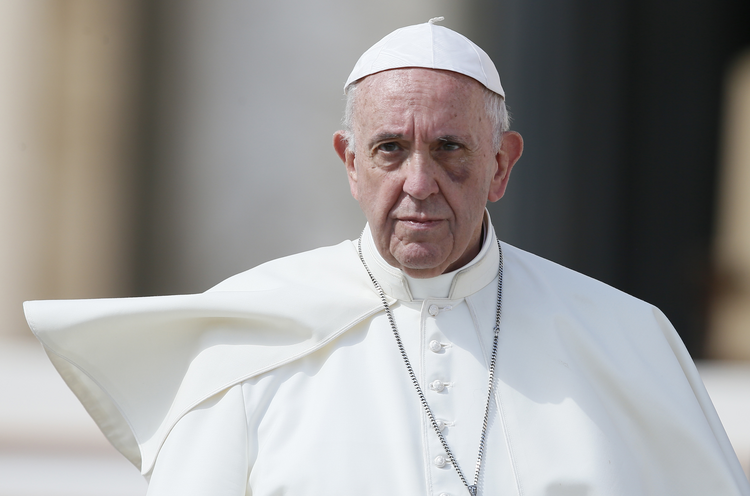 As the leaders of the United States and North Korea continue to ratchet up tensions, Pope Francis has thrown his weight behind an effort to curb nuclear weapons.

In a tweet sent Tuesday, which the United Nations marks as the International Day for the Total Elimination of Nuclear Weapons, the pope said, “Let us commit ourselves to a world without nuclear weapons by implementing the Non-Proliferation Treaty to abolish these weapons of death.”

Let us commit ourselves to a world without nuclear weapons by implementing the Non-Proliferation Treaty to abolish these weapons of death.

A few hours later, one of the pope’s top advisers and head of the Vatican’s human development office, Cardinal Peter Turkson, also tweeted about nuclear weapons, saying, "At Nagasaki for anniv. Of A-bomb attack, I saw wickedly deformed survivors. Yet nations, keep A-bombs not thinking they also can be victims."

Cardinal Turkson also tweeted last week about nuclear weapons when he alluded to the brewing conflict between the United States and North Korea. He wrote, “Heads of State, it = still true: eye for eye 'll leave world of blind. So A-bomb for A-bomb 'll make world dead. Yet God made world for life.”

The tweets come as the Holy See tries to persuade nations to reduce warfare and work toward eliminating nuclear weapons. Nine countries, including the United States, are currently thought to possess the capability to launch nuclear weapons and North Korea is expected to join that club.

Speaking at the United Nations in New York on Sept. 25, the Vatican’s secretary for relations with states, Archbishop Paul Gallagher, said the “world is awash” with weapons, including nuclear bombs, and that little is being done to slow their proliferation.

“Without greater international and regional cooperation, especially among weapons-producing states, to control and limit strictly the production and movement of weapons, a world free of wars and violent conflicts will surely remain an illusion,” the archbishop said.

He also addressed rising tensions around the world—and specifically called out the war of words between U.S. President Donald Trump and North Korean leader Kim Jong-un.

“All the diplomatic and political means of mediation should be engaged to avoid the unspeakable.”

“All countries should take a decisive and urgent step back from the present escalation of military preparations,” he said. “The largest countries and those who have a stronger tradition of respecting human rights should be the first to perform generous actions of pacification.

“All the diplomatic and political means of mediation should be engaged to avoid the unspeakable,” he added.

“Unfortunately, the proliferation of nuclear weapons increases international tensions, as is witnessed in the Korean Peninsula,” he continued.

He added that non-proliferation agreements work and so “it seems all the more urgent to invest in building those circumstances that would facilitate the creation of new bilateral and regional treaties.”

The Holy See is one of 50 nations that have so far signed on to the Treaty on the Prohibition of Nuclear Weapons on Sept. 20, during the September General Assembly in New York. The treaty bars signatories from developing, testing, producing, acquiring, possessing or stockpiling nuclear weapons. It would go into force 90 days after it is ratified by the national legislatures of at least 50 U.N. member states. So far, just the Vatican, Guyana and Thailand have taken that step.

The Holy See is one of 50 nations that have so far signed on to the Treaty on the Prohibition of Nuclear Weapons.

Under the treaty’s terms, non-nuclear nations agree not to pursue nuclear weapons in exchange for a commitment by the five original nuclear powers—the United States, Russia, Britain, France and China—to move toward nuclear disarmament and to guarantee other states’ access to peaceful nuclear technology for producing energy.

More than 120 countries approved the nuclear weapons ban in July over opposition from nuclear-armed countries and their allies, which boycotted U.N. negotiations.

The United States, Britain and France said in a joint statement in July that the prohibition would not work and would end up disarming their nations while emboldening “bad actors,” as U.S. Ambassador to the United Nations Nikki Haley put it. None of the world’s nuclear powers plan to sign the treaty.

In his U.N. address, Archbishop Gallagher acknowledged that the treaty faced an uphill climb but said the Vatican supports its underlying goals.

“While much remains to be done for the Treaty on the Prohibition of Nuclear Weapons truly to make a difference and achieve its full promise, the Holy See believes that it is one more blow on the anvil toward the fulfillment of the prophecy of Isaiah,” he said. “‘They shall beat their swords into plowshares and their spears into pruning hooks; One nation shall not raise the sword against another, nor shall they train for war again.’”

“We especially ask Russia to examine how it can better support global nonproliferation efforts,” Mr. Tillerson said. “If Russia wants to restore its role as a credible actor in resolving the situation with North Korea it can prove its good intentions by upholding its commitments to establish international efforts on nuclear security and arms control.”

Problem is, even if all nations signed a treaty, work would still be done in secret. Look at biochemical weapons. We do not build offensive systems but need to prepare for defense so we research and build offensive systems so as to research defensive capabilities and to be prepared. The end result is the same, we, and I mean everyone has them, treaties be damned.