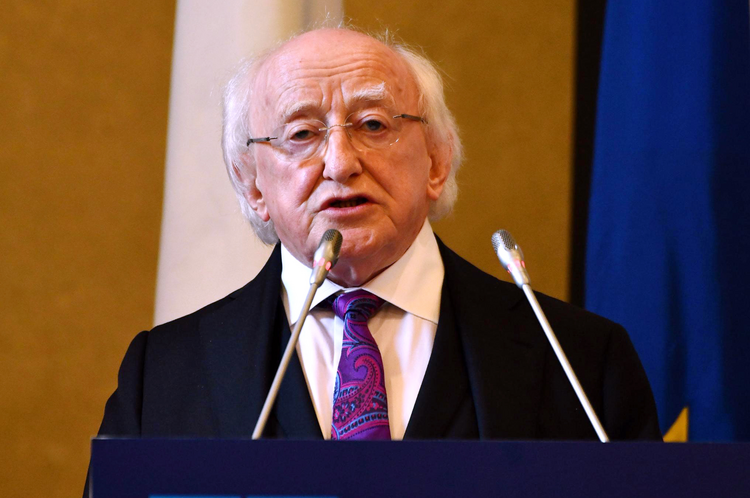 President Michael D. Higgins of Ireland delivers his address during the State of the Union conference in Florence, Italy, May 10. During a June 5 ceremony in Dublin, Higgins honored and apologized to women who once labored in the country's Magdalene laundries that were run by religious orders. (CNS photo/Claudio Giovannini, EPA)

DUBLIN (CNS) -- President Michael D. Higgins of Ireland described the treatment of women and children in state-controlled institutions managed by the Catholic Church as a "deep stain on Ireland's past."

During an historic ceremony hosted by Higgins and his wife Sabina June 5 to honor former residents of Magdalene laundries, the president said that "all of you and all the other women who cannot be with us today were failed by these institutions, the experience of which you share, and the religious orders that ran them. "You were profoundly failed by the state which, in its relationship to these institutions, should have had your welfare at its core. You were failed by governments that knowingly relied on the existence and practices of these institutions rather than addressing your particular needs in other, more sympathetic ways," he said.

Higgins apologized to the women, whom he called "survivors of the Magdalene regime."

Magdalene laundries, run by religious sisters, were common in Great Britain and Ireland in the 20th century. They were so named as a reference to Mary Magdalene's tears washing Jesus' feet.

The women sent to work in the laundries, the last of which closed in 1996, and to live in the convents attached to them were given the work of washing laundry as a penance for sins, real and imagined. Some of the young women were sent by parents or civil authorities for reasons that included having children out of wedlock, being seen as sexually promiscuous, or being perceived as being in moral danger.

Some 230 women attended the event. It marked the first time that they have been honored by the Irish state and came as the government announced a comprehensive compensation plan.

Higgins highlighted that since Irish independence in the 1920s, more 11,000 women spent time in the laundries, "but their experiences were too often never shared."

The women sent to work in the laundries, the last of which closed in 1996, and to live in the convents attached to them were given the work of washing laundry as a penance for sins, real and imagined.

"In recent years, the silence has been broken and you all have helped to let the light into some very dark corners of our shared past," Higgins said. "You have presented us with what makes a very harrowing and deeply uncomfortable reflection of an Ireland some would prefer not to be able to recognize, but which has to be acknowledged, transacted and to which a response must be made."

He said, "the treatment of vulnerable citizens in our industrial and reformatory schools, in the Magdalene laundries and in mother and baby homes represents a deep stain on Ireland's past."

The women -- many in their 80s -- traveled from the United States, Great Britain, Australia and throughout Ireland. The ceremony was part of a two-day commemoration and consultation on how the women's ordeals should be remembered.

Pope Francis is struggling with how to best deal with the crisis in the Chile Church. He could learn a lot from how Ireland is dealing with its past history of Catholic institutional violence against women and babies. Victims must be given voice, and justice must be served--whether via apologies, financial compensation, or jail time for the offenders. If it is the structural hierarchical institution that was at fault in Ireland or Chile, then that institution must change, or be replaced, or disappear.