Bobby Kennedy’s anniversary is not a moment for mourning but an hour for hope. 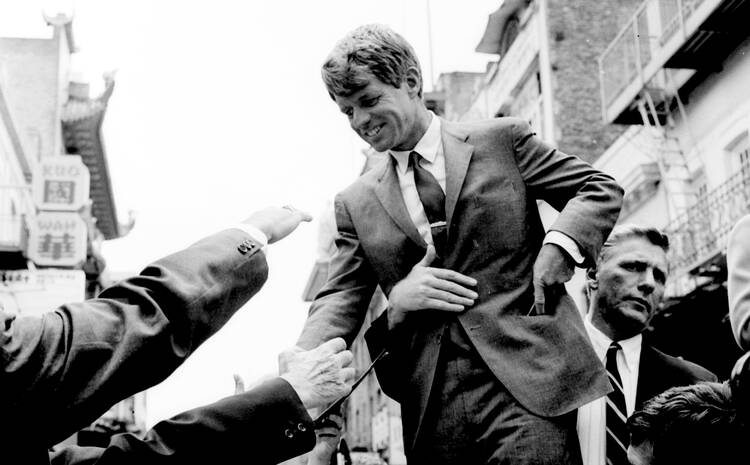 What I think is quite clear is that we can work together in the last analysis and that what has been going on in the United States over the period of the last three years, the division, the violence, the disenchantment with our society, the division whether it’s between black and white, between the poor and the more affluent or between age groups or over the war in Vietnam, that we can start to work together. We are a great country, an unselfish country and a compassionate country. And I intend to make that my basis for running over the period of the next few months.

I was born in Hyannis, Mass., nearly four years after Bobby Kennedy died. But my belief in the nobler spirit of politics and in the dignity of public service were born on the day I first heard his name. Like thousands of others, I entered public service as a young person because I was inspired by his life and witness.

Yet it was not a myth that spoke to me, but the man himself. His brother, Senator Edward M. Kennedy, once said that Bobby “should be remembered simply as a good and decent man.” That he was. Yet good and decent men are rarely perfect. To which I say: Thank God. For it is in overcoming the imperfections within himself, and those in the world around him, that a man becomes a hero and, in our memory of that triumph, the hero becomes fully a man.

In November 1963 Bobby Kennedy faced the most formidable imperfection in human existence: the sudden, violent loss of someone he loved. Mourning is the loneliest place in the world. Yet God did not abandon Bobby Kennedy. In the crucible of his grief, “the awful grace of God fell drop by drop” upon his heart, forging a soul in communion with the world’s pain. Thus the night of his sorrow gave way to the light of day, when his mourning became his mission and his wounded heart became the heart of a wounded healer. This was the man who ran for president in the spring of 1968 because, he said, “I want the United States to stand for the reconciliation of men.”

Good and decent men are rarely perfect. To which I say: Thank God.

Bobby Kennedy’s pilgrimage from despair to hope, from death to life, was the journey of a brother, a father, a husband, a citizen, a Christian. Yet it is our journey too. For as he did for Bobby Kennedy, God calls every one of us out of darkness and into his light. In the light of his grace, we cannot see what might have been. But we do see what was, and the power and spirit of what was is enough to dream anew of what might yet be. The 50th anniversary of Bobby Kennedy’s assassination, on June 6, is not, then, a moment for mourning but an hour for hope. And the ceremony that will mark the occasion is not only a remembrance of things past but the touchstone of our present and a rite of dedication to our future.

He still lives—in every courageous politician who seeks “a newer world,” in every public servant who has “the courage to enter the moral conflict.”

He still lives—in every “ripple of hope,” in every blow to “the mightiest walls of oppression and resistance,” in every word spoken and deed done against the terrors of racism and poverty.

The 50th anniversary of Bobby Kennedy’s assassination, on June 6, is not, then, a moment for mourning but an hour for hope.

He still lives—in the sacrifice of the human rights worker, in the prayer-in-action of the peacemaker, in the dignified labor of migrant peoples, in the dreams of every immigrant.

He still lives—in the spirit of the American people, who, though beset by human weakness, as all humans are, are “made strong in will to strive, to seek, to find, and not to yield.”

Yet we mark this truth not only with mere human words or earthly gestures but in our encounter with God in the sacrament that was the source and summit of Bobby Kennedy’s life. He was always the most devout in his famous Catholic family. But in the years after Dallas, he found in his faith a renewed sense of purpose and hope. For in the paschal mystery of God, we find the place where what is hidden in darkness is brought to light, where senseless sorrow is charged with meaning, where human weakness is redeemed and hope reborn.

Above all, then, Bobby Kennedy still lives because the one he encountered in the Eucharist—the one he sought to serve, the one who was crucified and yet rose triumphant—still lives. Thus faith, hope and love will never die.

Thank you, Father Malone. The light that guided Robert Kennedy in politics is dim at the moment, but it is still present. Thanks for reminding us of that.

I like Bobby Kennedy, I met Bobby Kennedy in Omaha in 1968.
Bobby was not the most decent of men, he played many a political trick
to get JFK elected to the House, to the Senate and to the Presidency.
He might have turned out like Jimmy Carter.

Sadly the world and the US of A are not as charitable as he
believed.