Now on Netflix: The heroic journey of Bobby Kennedy 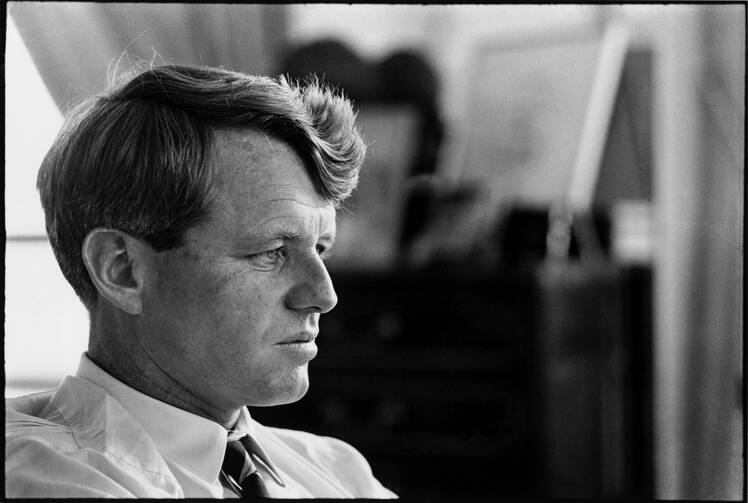 Donald Trump squats on so much of our mental real estate right now that Americans can forget the timeless quality of today’s problems. Or that the republic has always been a subdivided plot of seething partisanships. Or that there was once space on the landscape for a politician quite as impassioned and inspiring as Robert F. Kennedy.

It feels necessary to mention Trump because the timing and sentiments of Dawn Porter’s rather magnificent, four-part Netflix documentary would simply be tragic—rather than tragic plus infuriating plus, maybe, motivational—if the current state of the nation was other than what it is. If nothing else, the scope of Kennedy’s story—a hero’s journey, even an Augustinian allegory—possesses a grandeur missing from Washington right now. Of course, a lot of things attain grandeur if you wait 50 years, which is how long it has been since Kennedy was killed, in the Ambassador Hotel in Los Angeles, just after winning the California Democratic primary of 1968.

The scope of Kennedy’s story possesses a grandeur missing from Washington right now.

One of Porter’s achievements (she has been involved in a number of social-issue films, notably “Gideon’s Army,” about public defenders in the Deep South) is her film’s sense of urgency and currency. The archival material all feels fresh; much of it is in color, which helps; the propulsive music by Paul Brill flirts with the ’60s without being dated. Another affecting device is the telling of Kennedy’s story as a conversion narrative—two narratives, as it turns out.

That Kennedy’s moral fiber was rooted in his family’s staunch Catholicism is a point made early in Episode 1 (“A New Generation”). In Episode 3, during an outdoor Mass for striking California migrant workers, Kennedy is seen taking communion from a basket of consecrated loaves. The parallels to Christ are hard to miss, and the scene is one of many that are extremely moving. But it is St. Augustine, as suggested earlier, whom Kennedy most resembles, even though his transformation concerns his political worldview, rather than sins of the flesh.

It is St. Augustine whom Kennedy most resembles, even though his transformation concerns his political worldview, rather than sins of the flesh.

As a “ruthless” young lawyer and heir to a political dynasty, Kennedy worked for the anti-communist demagogue Sen. Joseph McCarthy and for a congressional committee investigating labor racketeers; as attorney general of the United States he approved the wiretapping of Martin Luther King Jr. Hardly committed to civil rights, he did—against his political instincts—go along when his brother, Jack, intervened to get King released from an Atlanta jail during the 1960 presidential campaign. But after his brother’s assassination—a point after which a hint of sadness never quite leaves R.F.K.’s eyes—he evolves, gradually, into social progressive and crusader.

While he never liked Lyndon Johnson very much, his second metamorphosis occurs during the 1968 campaign, during which the incumbent was the presumptive choice of the Democratic Party, Eugene McCarthy was running an insurgent campaign, and Kennedy saw himself as the only hope for both ending the Vietnam War and keeping someone like Richard Nixon out of the White House. While running for president is usually not considered an act of self-sacrifice, for Kennedy it was—though to what extent, no one could have foreseen.

Porter knows how to use her materials for maximum emotional impact. If so much of what we see feels new, it may be because the footage is so intimate—it doesn’t communicate news, but personalities, relationships and atmosphere. Porter holds closeups for longer than most nonfiction filmmakers would dare, but knows when to do it and why. She talks to the right people, all of whom have real-time memories of Kennedy and the ’68 campaign. They include William Vanden Heuvel, William Arnone, Pete Hamill, Marion Wright Edelman and Dorothy Huerta. Scores of others appear via clips, including the assassin Sirhan Sirhan during his 2011 parole hearing. Most poignantly, perhaps, is John Lewis, who can’t stop the tears while recalling the death of his close friend, which came so quickly after that of Dr. King.

Just as the death of J.F.K. ends Episode 1, the death of R.F.K. ends Episode 3. Episode 4 is titled “Justice for Bobby,” which is meant, I think, to be ironic. The entire Los Angeles Police Department investigation of his murder is portrayed as hasty, political and flawed. Paul Schrade, the onetime labor organizer and Kennedy confidante—and one of the five other people wounded during the assassination—is continuing to seek answers to unresolved questions. (He testified at Sirhan’s last parole hearing, in 2016.) It is an unusual to have to worry about spoilers in a 50-year-old story. Suffice to say, Porter has managed to inject life, blood and urgency into a history lesson that feels as urgent as tomorrow.

Are you seriously comparing RFK to Jesus and Saint Augustine?