As the Earth warms, mosquitoes become a social justice issue. Here’s how. 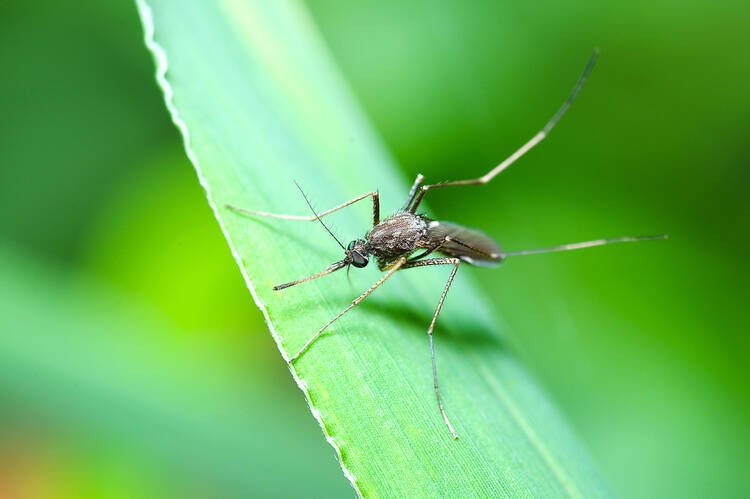 The communities most vulnerable to the impacts of climate change are, in many cases, the ones that have the fewest resources to adapt. Mosquito-borne illnesses are no exception.

As temperatures rise globally, previously temperate areas are more likely to experience subtropical and tropical heat. A study authored by New York and New Jersey government researchers and one by researchers in Egypt suggest that many types of mosquitoes will move into the newly subtropical and tropical areas—bringing with them diseases like Zika, dengue, yellow fever, West Nile virus and chikungunya. In many countries, that means more diseases in communities that lack the medical and mosquito-control resources to cope.

Dr. Diego Herrera is a family physician with Andean Health and Development, a Catholic nonprofit serving communities in rural Ecuador. He estimates that 60 to 80 percent of his patients have been infected by disease-carrying mosquitoes—perhaps more, since some people carry mosquito-borne viruses without showing any symptoms of illness.

“It’s not just one disease, one mosquito, one virus,” Mr. Herrera said. In central Ecuador, where A.H.D.’s hospitals are located, chikungunya is particularly problematic, but other mosquito-borne illnesses plague the region as well.

In the United States, incidences of mosquito- and tick-borne infections tripled between 2004 and 2016, in part because of warming temperatures.

And people who have been infected by one virus may experience more severe illness following infection with another. A study published last year by researchers at Mount Sinai Health System in New York shows that mice that have been previously infected with dengue can have more severe symptoms of Zika; the same is true for interactions among various serotypes of dengue.

Some of these diseases can have effects that are long-term or debilitating like birth defects, blindness or severe joint pain. (In the east African language of Makonde, “chikungunya” means “bending over disease” because of the chronic pain it causes some patients.) Particularly among people who already live in poverty, mosquito-borne illnesses can have a huge impact on daily life because of missed days or weeks of work.

“If you’re the father and get these illnesses, the whole family will be impacted,” Mr. Herrera said. He is worried that more and more families will struggle if infection rates in his part of Ecuador rise along with global temperatures.

In the United States, incidences of mosquito- and tick-borne infections tripled between 2004 and 2016, in part because of warming temperatures, according to a study released on May 1 by the U.S. Centers for Disease Control and Prevention. The research suggests places like South Florida and Texas—both of which experienced outbreaks of locally transmitted Zika in the summer of 2016—may see longer mosquito seasons and more mosquito-borne illnesses as temperatures continue to rise.

"That pathogen has to basically go through an incubation period within the mosquito—anywhere from a couple of days to over a week," Erin Mordecai, a Stanford researcher who studied the impact of temperature on mosquito populations, told NPR. Warmer weather causes viruses to mature faster, but it also shortens mosquitoes’ lives. So above a certain threshold, mosquitoes will die before they are able to spread disease. That means overall, the world may not necessarily see an increase in mosquito-borne illnesses, but there may be outbreaks in new places.

“People who are the least responsible for this problem [of climate change] are the people who are bearing the burden, whether it’s in this country or third-world countries,” said Julie Trocchio, a senior director at the U.S. Catholic Health Association, which represents more than 2,200 Catholic hospitals and health facilities. She says the C.H.A. sees mosquito-borne illnesses as one of the many ways climate change has a disproportionately harsh impact on people who lack financial resources and political power.

The C.H.A. has signed onto the Catholic Climate Covenant, a movement of organizations, church leaders, parishes and individuals seeking stronger action on global warming and climate change. It has urged President Trump and Congress to support the Clean Power Plan, the Paris climate accord and the Intergovernmental Panel on Climate Change.

“We’re concerned that when people talk about climate change, health isn’t one of the impacts that comes up,” said Ms. Trocchio. “And it’s huge, not just with the vector-borne diseases…but storms [and] heat events.”

Miami lost a Catholic Church in Hurricane Irma. They’re preparing for the next one.
Kate Stein

As warming temperatures allow mosquitoes to survive in new areas, there could be one upside, if it could be so described. Mr. Herrera believes mosquito-borne illnesses have garnered more attention—and funding—because of the increasing outbreaks in wealthier nations and cities. When the 2016 Zika outbreak in Miami prompted fears of a public health crisis, it also thrust Zika onto the radar of politicians, reporters and researchers in the United States.

“It’s important that people in the first world care” about mosquito-borne illnesses, Mr. Herrera said, in order for research benefiting poorer countries to be funded. Mr. Herrera said research on the impacts of concurrent infections, along with prevention efforts, would benefit his patients most.

But, he added, new research cannot just focus on travelers who get infected during trips abroad, then bring the viruses back home. And in the United States, the public health implications of climate change cannot be in the spotlight only when a Zika outbreak bridges partisan divides.

“We must speak of how the world interacts, fundamentally,” he said.

There were mosquito insecticides that were banned and world wide malaria deaths increased dramatically.

There is also research I believe going on in making mosquitoes infertile.

These are two other areas being explored. Click Andean health above. Looks like a good place to donate.

And America's president & evangelical VP cut off USAID funding for these diseases & more. Ordered a gag rule to prevent any medical care provider that receives any federal funding, from even mentioning abortion.
They don't believe in climate change, unless it's affecting his own properties. They believe that "just say no" to sex & abstinence will actually work to stop pregnancies. And they are vehemently against sex ed in schools.
This will not go well or end well. For the poor, the sick or women of any color.

I'm a former long-time Democrat of more than twenty-five years, (I 'm now 56) who although I'm now reluctantly a Republican, I very often disagree with typical Republican policies. Without going into too much detail, I oppose capital punishment, support stringent gun control laws, favor reasonable government regulation and laws to protect our environment (and on occasion make modest contributions to the Catholic Climate Covenant, and last year had a Guest Column printed in my county newspaper supporting the 2015 Paris Climate Accord), favor war only as a last resort after all diplomatic efforts have been exhausted, and believe that it is immoral to deliberately target civilians. Nuclear weapons must never be used. Finally, I support reasonable government assistance to the millions of Americans in need. As an imperfect gay Catholic, In years past I had sex with men. However, I regretted my acts, and received forgiveness and consolation from a compassionate priest through the Sacrament of Reconciliation. As like undoubtedly all Catholics, I continue to sin, and am fortunate that my kind pastor visits me each month for confession and the Eucharist at the quality nursing home/rehabilitation center where I live. I do believe that marriage is the union of one man and one woman, although along with the Church, I believe that gay people must be treated with respect and compassion. (I do have a gay friend with whom I keep in contact). I did read Laudato Si, and agree with Pope Francis ' vision regarding respect for creation, and join him in believing that concern for the environment does not justify the violence of legal abortion. As a retired Special Education teacher, I do favor sex education that not only informs children (at the appropriate ages) about the "basics" regarding sexual intsrcourse, but believe such education should emphasize the creation of a family. I do favor increased government funding for ethical scientific research. Finally, I support the government regulations.which mandate that there be separation of federal funding for contraception that isn't abortive in nature and believe that doctors shouldn't provide information about abortion. I financially support when I'm able two crisis pregnancy centers. One is "Mom's House," a network of about six homes which provide free quality day care for low-income pregnant women so that they can complete their education . I agree with the pro-life stance of the Catholic Climate Covenant, as well as make on occasion modest contributions to Catholic Relief Services, the bishop's humanitarian agency which also supports a comprehensive respect for human life from fertilization to natural death.

The catch-cry, social justice, is not a valid concept in moral theology but it is an invention of cultural Marxism.
Justice stands on the firm foundation of authentic Catholic teaching and it is well to stick to it.
God is sovereign, created the universe and all the myriad stars and planets and produced life in many diverse forms; worms, germs and pests.
No people on the face of the earth are responsible for the rewarming of the earth after the last ice age and no-one deserves a guilt trip for the unfolding of time and the consequences of the aging of the earth and the aging of the universe.

We Catholics must not collaborate with atheistic Marxist efforts to undermine the relationship between persons, particularly the pernicious effort to deny charity as a love inspired virtue and say those who have less have a right to what others have from the generosity and bounty of God.

Dominance and control of the actions of individuals makes behaviour coerced and quenches the possibility of gratitude replacing spite aroused by jealousy and envy. The story of the relationship between the chosen people and their God is that of exploring all the ways of law and duty and finding them unable to produce virtue and transform the human condition. Eventually they had to acknowledge that a saviour was absolutely necessary, and that saviour was just one single lone figure, not a mob or a community or a government.
After 2000 years we do not need new words for acting the ways that will do good rather than harm with our saviour as our guide rather than politics.

The catch-cry, social justice, is not a valid concept in moral theology but it is an invention of cultural Marxism.

The modern day Jesuits are Cultural Marxists. It explains everything they recommend. They want a layer of a new Catholicism on top of it which focuses on this world and not salvation. Definitely not traditional Catholicism as it existed for 1900 years.