Miami lost a Catholic Church in Hurricane Irma. They’re preparing for the next one. 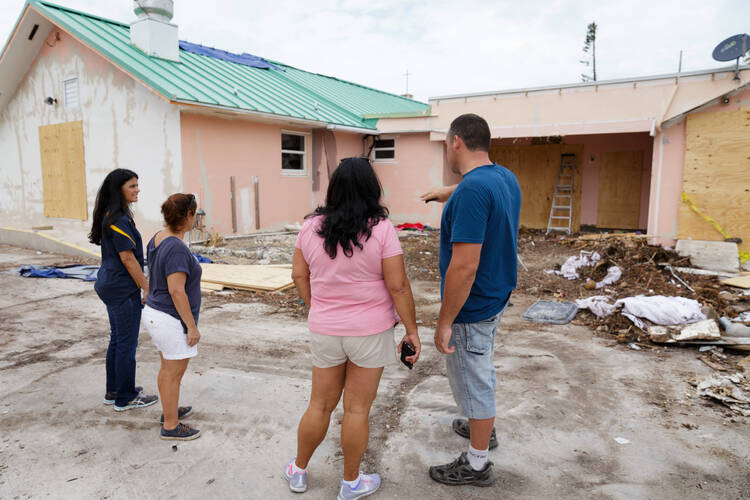 It is a blessing and a curse to worship by the sea.

Father Jets Medina of St. Peter Catholic Church knows that firsthand. Last September, Hurricane Irma ravaged his parish in Big Pine Key, a town on the island of the same name about 30 miles northeast of Key West in Florida. The hurricane gutted the rectory, parish hall, food bank and kitchen when it made landfall as a Category 4 storm. The storm surge also overturned pews and left water marks four feet up the walls, leaving his church beyond repair.

“We lost almost everything,” Father Medina wrote in an email to America. “But the real church, our parishioners, is very much alive!”

The storm surge overturned pews and left water marks four feet up the walls, leaving the church on Big Pine Key beyond repair.

A week after the storm, Father Medina and about two dozen of the church’s 500 parishioners celebrated Sunday Mass at a covered outdoor pavilion, using a wooden table and lawn chairs as an altar and pews. They shared hosts and the wine Father Medina found unharmed on the second floor of St. Peter’s Sunday-school building.

Seven months later, recovery is far from complete. Mass is still being celebrated in the pavilion, which now has vinyl walls and air conditioning. But there are plans to rebuild the church, and Father Medina says he hopes the groundbreaking will take place later this year.

The new church will be built according to the latest state standards for hurricane force winds, said David Prada, senior director of buildings and properties for the Archdiocese of Miami. The design will also take into account the flood threat from climate change and rising seas.

“Part of that process is raising the church to the proper elevation,” Mr. Prada said. After Hurricane Irma, “we saw at St. Peter’s the effect of a building built in the 1960s that was not subject to the rising sea levels or storm surge that we see now.”

Today, Florida building codes require new structures to be erected one foot above the height of a “100 year flood”—a hypothetical flood that the Federal Emergency Management Agency says a particular area could expect to see about once every 100 years.

“We saw at St. Peter’s the effect of a building built in the 1960s that was not subject to the rising sea levels or storm surge that we see now.”

Mr. Prada says that for St. Peter’s the base flood elevation is eight feet, based on maps used by FEMA and the National Flood Insurance Program. So the church is to be built at nine feet above sea level.

“At nine feet, it should not have flooded,” Mr. Prada said of the original St. Peter’s Church.

Mr. Prada said the archdiocese owns about 2,000 buildings and will work to ensure they meet or exceed Florida building code requirements. New construction will be built to the “100 year flood plus one foot” standard; older buildings at low elevations will be equipped with adaptations like flood barriers and pumping systems.

But Florida’s building code may not be strict enough. FEMA maps could be outdated, as shown by the devastating flooding that Texans supposedly outside “high risk” zones experienced during Hurricane Harvey last summer.

Some in Florida’s construction industry say they want more input into writing the state's building code so that it better addresses sea-level rise and hurricane preparedness. In the Miami chapter of the American Institute of Architects, a growing faction is pushing for stricter state requirements—and for architects to go beyond the state code when science suggests “one foot above base flood elevation” may not be enough.

"We’re underdesigning these buildings for a future that is happening whether we like it or not," Reinaldo Borges, chair of A.I.A. Miami’s sea-level-rise task force, told the Miami New Times following a panel hosted by the Miami Design Preservation League last year. "We’ve just got to be sure that these assets have a long life, that we do things with intelligence.”

The elderly and disabled were left behind in Hurricane Irma. What will happen next time?
Kate Stein

For this Jesuit, Hurricane Irma brings back memories of a childhood in Florida
Edward W. Schmidt, S.J.

Mr. Prada says the Miami Archdiocese is deciding whether to exceed Florida building code requirements on a case-by-case basis. The archdiocese will also cooperate with municipalities on adaptations like seawalls and neighborhood-wide pumps that benefit archdiocesan properties.

He added that at some point the archdiocese, like many communities in South Florida, will be forced to retreat from areas where flooding from sea-level rise becomes permanent.

“If we have a site that’s going to be two feet underwater, I’m not sure we’d be able to keep that site open,” he said. “Everything in the neighborhood’s going to be underwater.”

In South Florida, elected officials of all political affiliations generally agree on the urgency of addressing sea-level rise. But conversations on “retreat” are relatively rare. It is hard enough to win elections when you are trying to get voters to budget for a threat that’s growing by mere millimeters per year, in a state whose Department of Environmental Protection once banned the use of the term “climate change” in official communications.

“[The idea of] taking personal responsibility for your projects, for your family, for your home, for what you do, that’s definitely hit home,” he said.