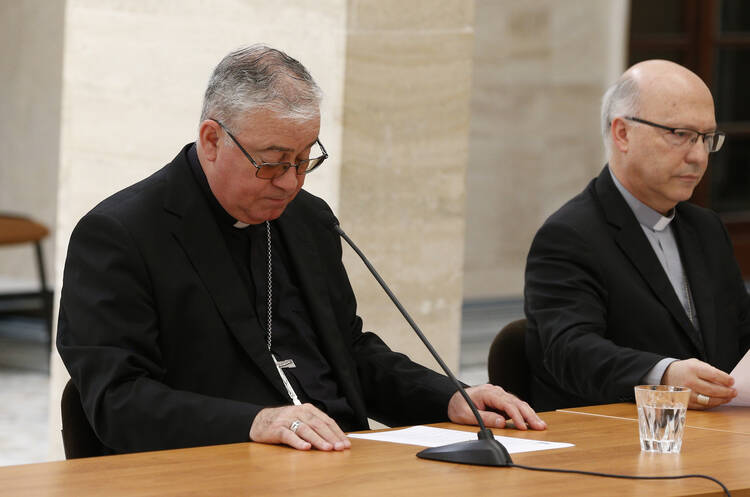 Bishop Juan Ignacio Gonzalez Errazuriz of San Bernardo, Chile, and Auxiliary Bishop Fernando Ramos Perez of Santiago, Chile, attend a press conference in Rome May 18. Bishop Gonzalez said every bishop in Chile offered his resignation to Pope Francis after a three-day meeting with him at the Vatican. (CNS photo/Paul Haring)

Victims of sexual abuse by clergy in Chile are reacting with praise and hope after every Chilean bishop offered to resign over a sex abuse and cover-up scandal.

José Andrés Murillo, a sexual abuse survivor who earlier this month spent hours discussing the scandal with Pope Francis at the Vatican, called the bishops delincuentes (“delinquents”) who deserve to go.

“For dignity, justice and truth, the bishops should leave,” he tweeted. “They didn’t know how to protect the weakest, they exposed them to abuse and then impeded justice. For this, they only deserve to go.”

In another tweet, Juan Carlos Cruz, the main whistleblower in the scandal, said the mass resignation was “unprecedented and good” and that this “will change things forever.”

“This is the pope that I met during my conversations in the Vatican,” Mr. Cruz told Chilean news site Emol on May 17. “I hope all [the bishops] resign and that the church in Chile begins to rebuild with true shepherds and not with these corrupt bishops who commit and cover up crimes, as the document states.”

The bishops announced the mass resignations Friday, after an emergency summit meeting with Pope Francis.

Marie Collins, who resigned in 2017 from a Vatican commission charged with helping to protect minors over what she said at the time was a lack of cooperation from senior church leaders, asked if there would be institutional changes to hold bishops accountable.

“Will the Pope now implement the Accountability Tribunal for negligent bishops recommended by the [Pontifical Commission for the Protection of Minors] and deemed ‘unnecessary’ by the [Congregation for the Doctrine of the Faith]? If not why not?” Ms. Collins tweeted.

Later Ms. Collins added, “Congratulations to the Chilean survivors for their courage and perseverance.”

The U.S. watchdog group Bishop Accountability called the resignation “as stunning as it is necessary” and urged Pope Francis to accept the resignations and to issue a “papal rebuke.”

“The institutional church and Catholics everywhere owe an enormous debt to the steely and gutsy survivors who brought about this unprecedented event. Juan Carlos Cruz, Dr. James Hamilton and José Andrés Murillo withstood years of disrespect from Catholic church leaders, including the Pope himself, to get us to this point,” Anne Barrett Doyle, the group’s co-director, said in a statement. “The unstoppable Catholic activists of Osorno and the brave Marist victims in Chile also helped bring about this long overdue housecleaning.”

“We commend Pope Francis too for acting boldly at last,” Ms. Doyle added.

Allegations of sexual abuse by Marist brothers working in Chile have come to light in recent weeks, with an attorney representing some of the victims calling the situation “unprecedented.”

The U.S. watchdog group Bishop Accountability called the resignation “as stunning as it is necessary” and urged Pope Francis to accept the resignations and to issue a “papal rebuke.”

Whether the pope accepts any or all of the resignations remains an open question, which could prove complicated for the Vatican.

Massimo Faggioli, a professor of theology at Villanova University, tweeted that “the public opinion in the Catholic Church will have some role to play in the next few days,” calling the dynamic “an interesting situation, given Francis’ fearlessness of polls.”

Ed Condon, a canon lawyer, wrote at The Catholic Herald that accepting all the resignations would do little in terms of holding errant bishops accountable, as it “could ensure that no individual person or persons have to answer directly for what they did.”

“They all express remorse, they all accept collective responsibility, they all resign, no individual answers for individual crimes. It is, in effect, an entire national episcopacy trying to take the gentleman’s way out, and Pope Francis should have none of it,” he wrote. While investigations and trials would could take months or years, Mr. Condon wrote, “taking that harder, longer road would be a real demonstration of probity, accountability and rigour in handling the abuse crisis.”

What little that I have read of Pope Francis’ letter to the Chilean Bishops is staggeringly different than any other papal instruction that I have learned about. His forthrightness in describing the “ism’s” – clericalism, messianism, elitism – as endemic in Chile’s Catholic Church could appropriately be ascribed in many other nations in the world as well. For laity and clergy and religious alike, worldwide, Pope Francis gives us instruction and example that we would well internalize to move our faith, belief and Church forward. I most especially appreciated this instruction: “we wish to be a church that is capable of putting at its center that which is important: the service of its Lord in the hungry, in the prisoner, in the person who is thirsty, in the displaced person, in the naked, the sick and the abused.”

So, are we saying not to accept the resignations so as to hold their feet to the fire of their sins? Is this valid and workable?? (Sorry but the word "errant" is far too nice and tame for me.) I have to hope and pray for the advice offered by canon lawyer Mr. Ed Condon to be correct and implemented. Again, the Holy Father is dependant on the wise counsel of advisors. Perhaps he should range more widely in search of them. 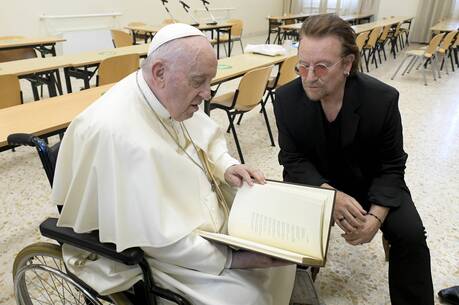