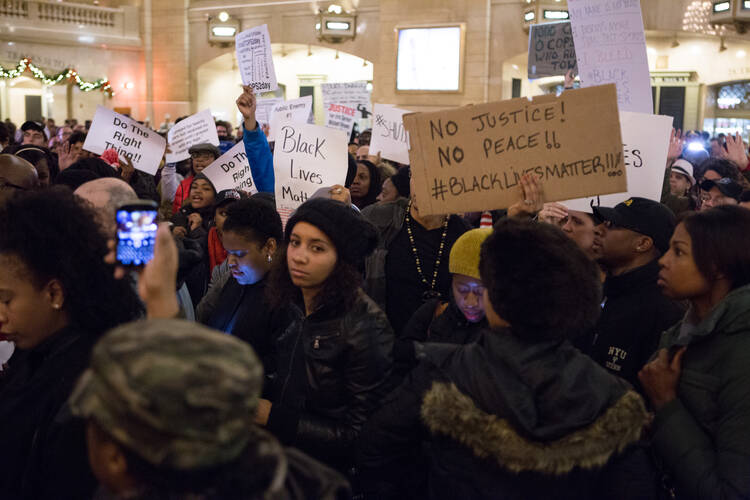 July 9 will mark the 150th anniversary of the 14th Amendment’s ratification, but the promise of racial equality in the United States is still unrealized. Overtly discriminatory and segregationist laws have been repealed, but conscious and subconscious racism infests every level of society.

Schools are no longer segregated by law, but public school segregation in many places is as bad today as it was in the 1960s. Members of minority groups are legally eligible for all jobs, but studies suggest that employers still favor white applicants, and the median income for black American households is, adjusted for inflation, lower than it was in 2000. Racism’s intransigence in the criminal justice system is particularly destructive, as it denies basic human liberties and undermines the very structures designed to ensure our safety.

Examples of explicit and implicit, individual and institutional racism in law enforcement are, tragically, too numerous to list. And recent, well-publicized police interactions with black Americans engaging in innocent activities, such as falling asleep in a dorm lounge or waiting for a business associate at a coffee shop, remind us that all racist acts begin with the simple, reprehensible and, for some, almost instinctual, assumption that skin color determines how a person should be treated.

Law enforcement interventions often begin when a member of the public calls the police about what is perceived as suspicious or illegal activity. As these recent events have shown, racial bias can trigger that call.

As for policing decisions, according to the New York City Police Department, community complaints account for disproportionately high arrest rates for marijuana possession in black and Latino neighborhoods. But studies show that once police are involved in either minority or predominantly white neighborhoods, they are more likely to stop, question, arrest and shoot black and Latino males.

Disproportionate statistics alone are not proof of racism, but the allegation that more people of color are arrested because they commit more crimes ignores “differential selection and processing,” known in the vernacular as “white privilege.” This refers to the 911 calls and traffic stops not made; the lower ratio of police deployed to white neighborhoods; the warnings given instead of arrests made; and the misdemeanors instead of felonies charged.

Racial and economic disparities continue throughout the post-arrest criminal justice process. A disproportionate number of black and Latino persons arrested for nonviolent crimes are held in pretrial detention. Pretrial detention, in turn, pressures a person, even an innocent person, to plead guilty. Racial bias, whether conscious or subconscious, causes prosecutors to offer better plea bargains to white defendants than to defendants of color charged with the same crimes; it causes all-white juries to disproportionately convict black defendants; judges to impose harsher sentences on black defendants (sometimes to the detriment of defendants of the judge’s own race); and influences probation decisions.

The intransigence of racial discrimination in our criminal justice system mirrors its ubiquitousness in U.S. society, but we can make progress in exposing and rooting out overt and subconscious discrimination.

First, voting rights for all U.S. citizens must be protected. Prosecutors, judges, sheriffs and police chiefs are either directly elected or appointed by elected officials. Voting laws that make it more difficult for members of racial minorities to vote or that dilute minority votes through gerrymandered districts are a direct affront to democracy and threaten progress toward a truly race-blind criminal justice system. State laws that disenfranchise convicted felons, even after the completion of their sentences, unduly harm racial minorities because racial discrimination has resulted in a disproportionate felony conviction rate for minority defendants. Thus, restoration of voting rights will have a greater impact on minority voters.

Second, ending pretrial detention for individuals accused of nonviolent crimes reduces the economic and psychological burden of arrest and the undue pressure to plead guilty. Bail reform restores the constitutional right to trial and shifts the burden of guilt back to the government; it encourages prosecutors to drop unprovable charges and reduces the incentive to make unjustified arrests.

These changes would be universally beneficial, but the impact will be greatest in minority communities that currently suffer the most from overly aggressive detention policies. We must recognize, however, that bail is a money-maker for the government, and bail reform, while reducing incarceration costs, can increase administrative costs. Communities must be willing to make short-term payments to reap long-term benefits.

Third, we must work to end subconscious prejudice at every level, from judges to jurors. This may be the most difficult task because its perpetrators do not even acknowledge they have a problem. Nevertheless, anti-bias training and positive personal interactions can change behavior. Education is our best hope to end racism as it is learned and, consequently, must be unlearned.

Finally, a 2016 study funded by the National Institutes of Health found that the makeup of one’s neighborhood is the most significant determining factor in the racial disparity of arrested youthful offenders. This study suggests that community desegregation can curtail racial disparities in the criminal justice system. Thus, voters concerned about racial parity should concern themselves not only with law enforcement, but also with community planning, real estate development and school district decisions. There is much work to be done.

Law enforcement is not easy. Split-second decisions often are required and mistakes, whether based on gut instinct or statistical analysis, have devastating consequences. Police officers sometimes kill or harm unarmed, law-abiding civilians, and judges sometimes release dangerous individuals. It is unrealistic to expect perfection, but we can and must continue the “relay race” to end personal biases and institutional policies that treat people of color as inherently dangerous.

What is the racism? Maybe the cause is something the author will not address?

I suggest this author and all editors and authors read Heather MacDonald and Thomas Sowell before they write any more articles on racism or discrimination. The headline will be revised after they read these people who have studied the issues.

There is real hope for sentencing guidelines to be changed.

Ellen,
You write: “ the median income for black American households is, adjusted for inflation, lower than it was in 2000.“
Two questions....out of wedlock births are now 70% in black homes whereas they were 25% in the black household in the 1960’s. Has that accelerated since 2000? If so, that would contribute to your figure. Number 2....you don’t mention if household income for whites and Latinos since 2000 are also down since 2000. By not mentioning that, you bias the imagination to think others went up in income...but that may not be the case.

There is actually a study quoted in the NY Times which shows black women outperform white women in income. Not mentioned here. Doesn't fit the narrative..

Not true. You should read actual study. Study done by Stanford and Harvard universities.

Race and Economic Opportunity in the United States: An Intergenerational Perspective∗

I think it's a mistake to conflate the Catholic view on social issues (e.g., poverty, and the challenges minorities may face) with the collectivist ideology of the far-left (in this case: unsubstantiated claims about racial discrimination).