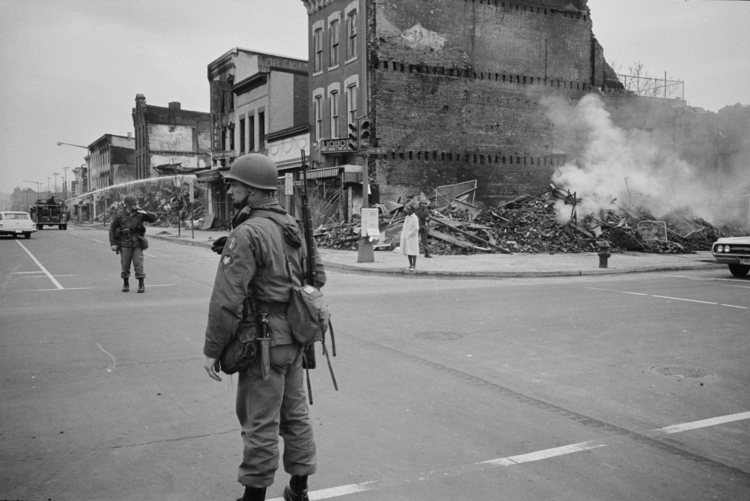 A soldier stands guard at 7th and N streets in the Northwest section of Washington in this April 8, 1968, photograph courtesy of the Library of Congress. The photo shows the ruins of buildings destroyed during the riots that followed the assassination of the Rev. Martin Luther King Jr. (CNS photo/Reuters, via Library of Congress)

After the murder of Martin Luther King Jr. on April 4, 1968, the editors of America asked: “Will this prophet be heard in death as he was not heard in life? Will the martyr accomplish by his blood what he could not achieve by his words?”

The original meaning of the Greek word martyr is “witness,” taken in the Christian sense to mean one who witnesses to the faith with one’s own blood. Dr. King’s witness was not secular or politically partisan, but one profoundly inspired by his conviction that the biblical demand for justice was as pertinent in our day as in the days of the ancient prophets.

In the weeks that followed Dr. King’s assassination, religious leaders penned an interfaith statement to President Lyndon B. Johnson and the U.S. Congress, calling for concrete action to continue the work of the civil rights movement and to “lift up the burden of the poor and oppressed in our land.”

On the one hand, interfaith and ecumenical groups have made great strides in the fight against poverty and racism. Groups like Circle of Protection bring together a broad coalition of Christians to oppose budget cuts that would gut federal programs like food stamps and Medicaid and disproportionately harm people of color. People of every faith joined voices to condemn the vile racism laid bare at last summer’s white supremacy rally in Charlottesville, Va. The tenets of social justice are now firmly ensconced in the religious educational curricula of innumerable schools.

“Will this prophet be heard in death as he was not heard in life? Will the martyr accomplish by his blood what he could not achieve by his words?”

But it is impossible to ignore the bleak economic and social realities that many African-Americans and members of other racial minority groups still face. Decades after the Civil Rights Act, the Voting Rights Act and the War on Poverty, Americans of color continue to face social and economic inequality and a widespread lack of opportunity. In the United States, if you own a home, if you went to college, if your economic assets exceed your liabilities, if you have a positive view of law enforcement, you most likely are white.

Those realities are accompanied by a disturbing complacency in mainstream political and cultural discourse. The insidious notion that all Americans now enjoy equal treatment under the law or that our individual outcomes (economically, politically, socially) unfold independently of any legacy of racism and discrimination infects everything from Supreme Court decisions to tax policies that freeze economic inequality.

The rhetoric, from the president all the way down to local sheriffs, often blames ethnic minorities for social and health problems that are actually exacerbated by racially discriminatory policies. We as a nation seem more and more willing to see the racist structures of the past as past, when in fact they remain present today throughout the nation.

As we honor Martin Luther King Jr. for his witness in the struggle for equal rights, we do well to remind ourselves that the very concept of equal rights is robbed of substance in the face of the reality that some people’s equal rights in this country are still threatened.

Breifly, until liberal media can summon truthfulness about bad black life choices in the ghetto and oddly by millionaire sport figures like D. Wade (arguing with his girlfriend and then fathering a child by another woman during their time-out)....millions of non liberal readers will smile and wince at such editorials. There are hard working black ceo's, truck drivers, construction workers, black accountants, black naval and army men and women of all ranks, financial advisors, teachers etc. The ghettos in our cities ( and some sports millionaires) are different than those hard working blacks and are composed of some people who have no problem with bad romantic/sexual choices that leave millions of boys especially without knowing their fathers and without the behaviour fears that a present father instills. Yes black mothers can be strict but it's often a strictness that doesn't extend to street behaviour and sex. In 1964 about 25% of black children were born out of wedlock...now it's 70%. So it has zero to do with slavery and much to do with breaking God's rules on procreation. Tell your young female relatives....America editors....to have four children by boyfriends not by one husband. See how affluent they are going forward five decades after that choice. They'll be broke and living in a trailer park....and it will be the fault of their choice....a breaking of God's rules on procreation...a spitting on God's rules...as done by D. Wade recently....a sports millionaire black who fathered a child who will rarely see his father though I'm sure he'll send a very good check monthly.

"So it has zero to do with slavery" - It's fascinating how the right-wing ideologues shy away from history and the impact history has on a people. It has everything to do with slavery and an oppression by the dominant culture that continues to today. Slavery and oppression have generation-arching impact in family systems and contribute to traumatic stress and trauma in the lives of people of color in America. This is a simple fact. Those "bad decisions" you discuss are primarily motivated out of behavior consistent with a traumatized people. It is sad to read a commentary so steeped in judgement and so completely lacking in compassion. The opposite of Christ's teachings and example.