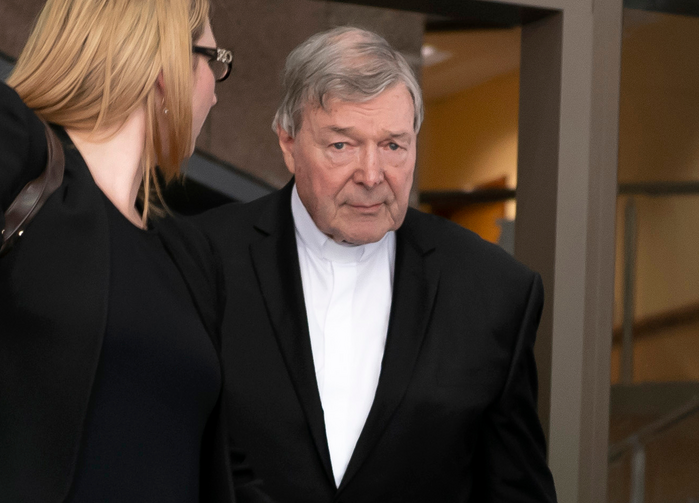 An Australian magistrate today ordered Cardinal George Pell to stand trial before a jury on charges of sexual abuse that go back decades. He is the most senior Vatican official to be put on trial for such offenses

The magistrate’s decision did not come as a surprise at the Vatican; given the nature of the allegations, the climate of public opinion in the country, the anger at the Catholic Church and at Cardinal Pell, in particular, over such abuses, as well as the political pressures, it would have been extraordinarily difficult for a magistrate to rule otherwise. The magistrate, Belinda Wallington, nevertheless dismissed many of the original charges against the cardinal, including the most serious ones, but ruled that there was sufficient evidence for other charges to warrant sending him to trial.

Cardinal George Pell is set to stand trial on charges of sexual abuse that go back decades.

The cardinal had sat silently during the four weeks of committal hearings in March and April, but this morning when asked how he pleaded, he responded with two words: “Not guilty!”

Hours later, the director of the Holy See Press Office, Greg Burke, issued a statement that said, “The Holy See has taken note of the decision issued by judicial authorities in Australia regarding His Eminence Cardinal George Pell.”

Since June 29, 2017, the cardinal has been on a leave of absence from his positions as prefect of the Secretariat of the Economy, a senior-ranking position at the Vatican, and a member of the pope’s Council of Cardinals Advisors. (It is not the case, as has been reported in a number of news outlets, that he is the third-ranking official at the Vatican.)

When asked how he pleaded, Cardinal Pell responded with two words: “Not guilty!”

On that occasion, Pope Francis applied the principle of law “in dubio pro reo” (doubt favors the accused), insisting that a person is to be considered innocent until proven guilty. Consequently, the pope did not remove him from these posts as he believed it would be equivalent to an admission of guilt. Today’s statement indicates that this remains the pope’s position.

Pope Francis explained his stance in a press conference on the return flight from World Youth Day in Poland on July 31, 2016. He then noted that “doubt exists” regarding the allegations that were being examined by the judicial system.

“We have to wait for the justice system to do its job,” the pope said, “and not pass judgment in the media because this is not helpful. ‘Judgment’ by gossip, and then what? We don’t know how it will turn out. See what the justice system decides. Once it has spoken, then I will speak.”

“We have to wait for the justice system to do its job,” the pope said, “and not pass judgment in the media because this is not helpful.”

Cardinal Pell, of course, could decide to hand in his resignation to the pope. His legal situation is different from when he first left Rome and, as sources in Australia say, it could take one to two years for the trial to begin unless it is given preference. His lawyer has also indicated that he may ask that some of the charges be dealt with in a separate trial. It is therefore difficult to see how the cardinal could return to work in the Vatican anytime soon.

Given that Cardinal Pell will be 78 next June and knows that it is not possible for him to fulfill his functions at the Vatican until the trial ends (and with an acquittal), he may decide that it is best to hand in his resignation now. If he were to do so, sources in Rome say Pope Francis could accept it.

The cardinal returned home to Australia last July to defend himself against the allegations of sexual abuse and to clear his name after the Victoria police brought charges of historical sexual abuse against him, following a two-year long investigation. The details of the charges and the names of his accusers have not been made public, in accordance with the law of the state.

It is difficult to see how the cardinal could return to work in the Vatican anytime soon.

Currently, Cardinal Pell is prefect of the Secretariat of the Economy but, because of his leave of absence, he cannot exercise any of the functions of that role. Pope Francis has appointed Msgr. Luigi Misto as the acting head of this department, which oversees Vatican finances.

Cardinal Pell is also one of the nine members of the pope’s Council of Cardinal Advisors, a group tasked with assisting Francis in the reform of the Roman Curia and in the governance of the universal church. Whether he can return to that advisory role depends not only on the length and outcome of the trial but also on whether Francis decides to change the composition of the council once it has finalized the Constitution for the Reform of the Roman Curia, something that is expected to be completed before the end of this year. Sources in Rome say Francis is likely to change the membership of the C9 by early 2019.

In addition, Cardinal Pell is not allowed to carry out any pastoral ministry in public until the judicial process has ended.

He is due to appear before Victoria’s County Court on Wednesday for a hearing that will determine the next steps. The magistrate today ruled that he is forbidden to leave the country, as part of the conditions for allowing him to be free on bail.

In a statement issued by his lawyer, Cardinal Pell reaffirmed his innocence and said, “he would like to thank all those who have supported him from both here in Australia and overseas during this exacting time.”

So much intrigue, including the high rank of Cardinal Pell, his close association with the financial reforms of Pope Francis, his reputation for orthodoxy and organizational acumen, his mental vigor despite his 78 years and a heart condition, the unusual initiative by the Victoria police to set up "Operation Tethering" to investigate Pell before they had received any complaint against him (the "get-Pell" operation), the journalist Louise Milligan who wrote a book condemning Pell based at least in part on innuendo and hearsay, and Pell's non-Catholic lawyer Robert Richter QC, an intellectual pugilist despite his 70+ years of age. Already, a number of charges have been withdrawn, and Magistrate Belinda Wallington ruled others could not have occurred based on the natural impossibility of bilocation. But sufficient charges remain that are possible to justify the trial.

This case has hallmarks of the 19th century fin de siècle Dreyfus affair in France, with the clerical and anticlerical parties on opposite sides today. This 1 to 2 year trial could be as memorable and as politically consequential. If Cardinal Pell is found innocent (which he vigorously claims), this will go down as a turning point in the credibility of accusations 40 years after the claimed event. If he is found guilty, it could force Pope Francis into retirement (if God doesn't call him there first).

Very good. Continue the leave of absence and make sure he is NOT living in a Church related property and he really should not be wearing the Roman Color until he is reinstated and shown to be not guilty. A priest in a neighboring parish had to do that and yes he was found to be innocent and cleared. It was found out his accuser lied