Will Cardinal Pell face a trial by jury in sex abuse case? 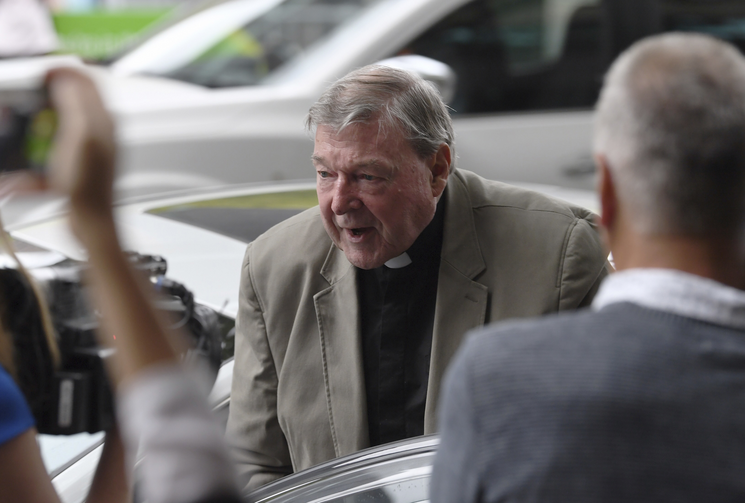 On May 1, Cardinal George Pell will know whether he has to stand trial to face allegations of historical sexual offenses or not. On that day, the Australian magistrate, Belinda Wallington, who heard the case, will announce her verdict.

She will do so after having listened to the case during four weeks of committal hearings in Melbourne Magistrates’ Court in March and April, almost half of which were held behind closed doors, as is normal in such cases. She will decide whether there is enough evidence to warrant a trial by jury or whether to dismiss the case. If she decides to send him for trial, she is also likely to announce the charges.

The names of the complainants, the details of the allegations and evidence, as well as the charges against the cardinal are not known publicly, and the Australian press and other media have been prohibited by law from publishing either.

If the magistrate decides to send him for trial, she is also likely to announce the charges.

The media could only report what happened in the public sessions when the cardinal’s defense lawyer, Robert Richter, arguably Australia’s foremost defense counsel, cross-examined witnesses who were not the accusers. From the open court sessions, however, it is evident the prosecution has suffered some major setbacks: One of its witnesses has died, another withdrew from the case for reasons of serious illness, while a third made a fresh statement to the police and so his case will now be considered separately as part of a new investigation. The prosecutors also withdrew some potential charges but indicated that they are likely to resubmit them at a later date, which would seem to suggest another trial.

In the public hearings, Mr. Richter attacked the complainants, accusing them of dishonesty and of creating a campaign against the church. He accused the police of being biased in their investigation and challenged the magistrate (a judge), suggesting that she should disqualify herself. Whether all this has helped the cardinal’s case remains to be seen.

Australian church sources (who did not wish to be identified) told America in recent weeks that they think it “likely” that Cardinal Pell will be sent for a trial by jury because the atmosphere in the country is “so very aggressive against the church and Pell in particular” that, as one of them put it, “it will be a brave magistrate to find that he has no case to answer.”

Australian church sources said the atmosphere in the country is “so very aggressive against the church and Pell in particular.”

On June 29 of last year, Cardinal Pell told an early-morning Vatican press conference: “I’m looking forward finally to having my day in court. I repeat I am innocent of these charges. They are false. The whole idea of sexual abuse is abhorrent to me.” Hours earlier, the Victoria police announced that they had charged him with “multiple charges in respect of historic sexual abuse,” after a long investigation that included interviewing the cardinal in Rome the previous October. He was summoned to appear before Melbourne Magistrates Court on July 18.

The cardinal, in his statement, pointed out that “these matters” had been under investigation for nearly two years, and “there have been leaks to the media, relentless character assassination, and for more than a month claims that a decision on laying charges is ‘imminent.’” He revealed that he had kept Pope Francis “regularly informed throughout this lengthy process” and had “spoken to him in recent days about the need to take leave to clear my name.” He expressed gratitude to the pope for granting him “this leave to return home” and to his doctors for advising him how best to do this.

“I have been consistent and clear in my total rejection of these allegations,” Cardinal Pell said. “News of these charges strengthens my resolve and [the] court proceedings now offer me an opportunity to clear my name and then return to my work in Rome.”

“I have been consistent and clear in my total rejection of these allegations,” Cardinal Pell said.

Since that day the cardinal has not been able to carry out any public ministry as a priest. He has resided in a seminary in Sydney during this period and was present in court throughout the hearings but remained silent. His lawyer told the court that the cardinal declared he is innocent of all the charges against him.

Next Tuesday, he will know if the magistrate agrees with him.

The magistrate’s verdict will have wide-ranging implications not only for the cardinal and the church in Australia, where he served as the archbishop of Sydney and Melbourne, but also for the pope. Francis appointed him in April 2013 to be a member of his Council of Cardinal advisors, and in February 2014 named him prefect of the newly created Secretariat for the Economy, one of the senior positions in the Roman Curia.

Right now, the cardinal is on “leave of absence” from both positions as Francis applied the principle of law “in dubio pro reo” (doubt favors the accused) in his case, believing that to remove him from these posts would be equivalent to an admission of guilt. He explained his stance in a press conference on the return flight from World Youth Day in Poland on July 31, 2016. He then noted that “doubt exists” regarding the allegations that were being examined by the judicial system.

“We have to wait for the justice system to do its job and not pass judgment in the media, because this is not helpful,” Pope Francis said. “‘Judgment’ by gossip, and then what? We don’t know how it will turn out. See what the justice system decides. Once it has spoken, then I will speak.”

Correction, April 28:This article originally misstated where Cardinal Pell was residing in Australia. He is staying in a seminary in Sydney, not Melbourne.

Personally I feel sorry for Pell as he is being hounded by all the anti Catholic elements in Oz . I don't know how he copes with this ....

There is nothing in the Pell investigation to show that he is being 'hounded' by 'anti-Catholic elements'. He has returned to answer various allegations made against him in the Royal Commission into Child Sexual Abuse and other allegations by those who state that he sexually interfered with them. I feel absolute disgust that Denis Jackson chooses to use anti-Catholicism as an excuse for Pell. Every form of justice has been afforded the Cardinal to answer his accusers. Unfortunately, there is a strong element in the Australian Catholic hierarchy which refuses to acknowledge any wrong-doing. Their cheer-leader appears to be Denis Hart, head of the Melbourne Diocese.

This has been a disgraceful witch hunt against the first man who, when he reached a position to deal with the gay infiltration of the church, is now being hounded for actually doing something about it.
His refusal to give Holy Communion to members of the Rainbow Sash Movement has never been forgotten by the Gay Gestapo, and they will hound him to the grave for getting gays out of the Church and setting up the first real attempt to deal with the issue.
Lorraine, anyone can make 'allegations' and it looks like they have. The collapsing of the state case against Cardinal Pell is proof of this. Sending the case to trial is just further proof of the embedded arrogance and anger of the Gaystapo power in our society.

Mr. Jackson is correct in this case. I have followed the clerical abuse scandal in Australia for a long time. Mr. O'Connell didn't mention that the police had set up a task force to investigate the cardinal two years before a complaint was ever made. Subsequently, they failed to issue warrants to examine the diocesan or the cardinal's appointment books to confirm or refute the allegations.