The U.S. has interfered enough in Syria

The U.S. has interfered enough in Syria 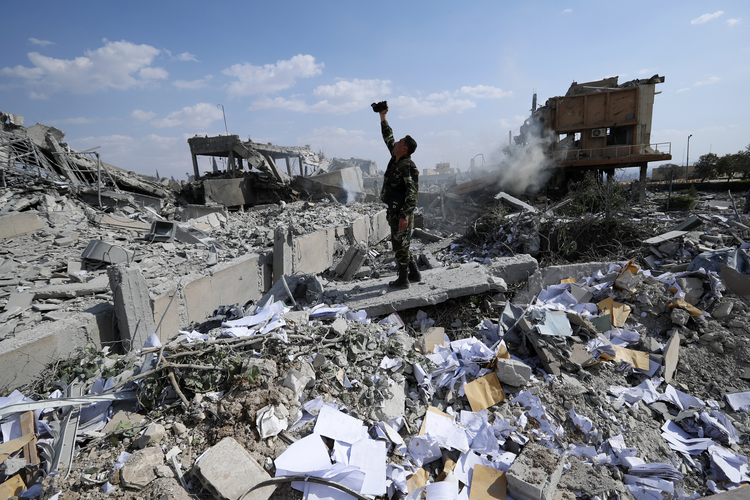 The U.S.-led missile strikes on Syria, following an alleged chemical attack by the Syrian government on its own people, means more war in a country that has seen nothing but for the last seven years. The strikes violate both the United Nations Charter and the U.S. Constitution, and they are a show of force that will accomplish nothing. Flouting legal norms under the guise of humanitarian concern, they are a worrisome indication that the United States could grow more involved in a conflict that has created millions of refugees, with far-reaching consequences, and has cost the lives of an estimated half a million Syrians.

Far from helpfully addressing the purported use of chemical weapons, the strikes by the United States, France and the United Kingdom complicate the work of the Organisation for the Prohibition of Chemical Weapons. A team of experts from the OPCW was on its way to Syria to ascertain whether a chemical attack had taken place, and if so what chemicals were used, when the missiles were launched. Questions about the timing of the strikes can be added to concerns about their legitimacy, purpose and efficacy.

The strikes violate both the United Nations Charter and the U.S. Constitution, and they are a show of force that will accomplish nothing.

Syria today is one of the most dangerous spots on the planet, a place where the world’s two largest nuclear powers are contending for power and influence along with Turkey, Saudi Arabia, Iran and Israel. Just a few days before the alleged chemical weapons attack on April 7 on rebel-controlled Douma, a suburb of Damascus, President Donald Trump said U.S. troops in Syria would be coming home “very soon.” (Some 2,000 U.S. soldiers are in Syria fighting ISIS.) The response to Trump’s March 29 statement was an outcry by pundits, politicians, generals, and other members of the defense and foreign policy establishment. After a disastrous failed war in Iraq, another failing war that continues in Afghanistan and a ruinous military intervention in Libya, the appetite for military intervention seems unchecked among many of those most responsible for the United States’ 21st-century wars.

The Assad regime has largely won the Syrian civil war thanks to assistance from its allies Russia and Iran. Having backed the Syrian rebels and lost, the United States seems loath to give up the game and inclined instead to obstruct efforts by the Syrian government and its allies at stabilization and reconstruction. This in order to play the part of the spoiler, depriving Iran and Russia of influence in Syria.

The United States seems inclined to obstruct efforts by the Syrian government and its allies at stabilization and reconstruction.

Spite is not a noble emotion, nor is it a strategy or a solution. The United States has no vital interests in Syria. Its arming of the Syrian rebels stemmed from a desire to see the overthrow of the Assad regime—a desire that goes back long before protests began in 2011. WikiLeaks cables, statements by the French foreign minister Roland Dumas, and reporting by The New York Times and other publications have documented that the United States and Britain were involved in efforts to sow sectarian tensions and undermine the Syrian regime several years before the Arab Spring arrived in Syria. Indeed, the United States’ long history of wanting to determine Syria’s government goes back generations. The first CIA-organized coup in Syria is alleged to have taken place in 1949; another certainly did in 1956-57.

With hundreds of rebel groups on the ground, it was always uncertain what would happen if the Syrian rebels succeeded in defeating the government. Like people in any nation, they deserved the effort to try. But as time has gone on, Syrians have become pawns in other countries’ wars, many of these countries willing to fight to the last Syrian.

The United States, which has had Syria in its sight lines for its resistance to U.S-Israeli hegemony, has behaved no better than other nations. U.S. participation in the civil war, funding rebel groups, some of them little different from Al Qaeda, has been irresponsible and frivolous. Its continued insistence that Syrian President Bashar al-Assad be removed from power has doomed efforts at a negotiated solution and drawn out the course of a long and bloody war.

The president is right in not wanting a permanent role for the United States in Syria. We are not going to rebuild that country, and it is best to leave it to those who will—the Syrian government and its Russian and Iranian allies. ISIS grew in the vacuum created when the Syrian government withdrew from eastern Syria to fight rebel forces. Rather than creating obstacles to reconstruction that will feed instability and terrorism and perpetuate the flow of refugees, we should act on the knowledge that a stable, prosperous Syria is in our own best interests as well as those of the Syrian people.

Great article! At least there is one voice for peace left in America. Iraq never had WMDs, and neither does Syria. Why do so many continue to believe the lies our government tells us.

Margot
You intentionally leave out, push aside or ignore so many essential precursor facts that you consign you essay to pure pap.
You fail to mention: Obama's precipitous withdrawal from Iraq (the birth place of ISIS); his failure to enforce his declared "red line"; his declaration that "Assad must go"; his declaration that Russia's assistance of Asad would suck that nation in to a quagmire; his subsequent agreement to let Russia supervise and guarantee destruction of Syrian chemical weapon cabability; his refusal to arm the Syrian Kurds; and most importantly his myopic pursuit of a deal with Iran that permitted/ funded Iran's ability to join forces with Asad.

THE RESULT: Our interest is now in preventing the establishment of an Iranian corridor to the Israeli and Labanon borders under the umbrella of Russian arms which will eventually require us to defend our Israeli Allies.
If you need any proof of this look only to the willingness of Isael's once implacable enemies in Saudi Arabia and The Gulf States to make common cause with Israel to stop Iran.

We are NOT the world's Police!

It is lazy and or racist to compare Syria today with Iraq prior to our invasion. Saddam had not been bombing Iraqis for 9 years when we invaded. When we toppled Saddam's regime , the people had not risen up to topple this dictator. When we invaded the first thing we did was to murder all the Sunnis of Baghdad, and then to install and Shia/Kurd government and to persecute the Sunnis, by not allowing them to have government jobs or to be in the military. This denial of their equal human rights, on our part, led to isis and to resistance.

The situation in Syria is that we have people who rose up peacefully to topple a brutal dictator, and were getting murdered by the regime for rising up. The trope that it was outside foreign governments who were agitating Syrians to protest is what is always said when people rise up for their rights; it was said during the civil rights era in the Jim Crow south; its outside agitators riling up our gentle good Negroes; now its outsiders riling up the good Syrians who really loved living under a dictator![lol] The West has stood by and allowed this regime to engage in a holocaust of Sunni Syrians. To say the Syrians have suffered enough, therefore what?We should allow Assad to continue murdering them? This is either malice or indifference . Whatever it is , it's morally reprehensible.. Whatever happened to never again? The world has a moral obligation to stop Assad's horrific crimes against men, women and children.
The US has NOT backed the rebels , not in any meaningful way as no, no- fly zone was ever imposed on Assad so that he could not rain down bombs on rebels.[ But we did impose a no fly zone on Saddam so he could not murder Kurds] .If Alquada and other groups are opposed to a mass murdering dictator it does not follow that we should support him. The people have the right to be free of a mass murdering government.

To say this is a proxy war instigated by outsiders on the Syrian people is a self serving narrative to deny the reality on the ground; Syrians rose up peacefully against a dictator who denied them their rights, the natives got uppity [how dare they] and the dictator has taken to mass murder to remain in power. It is beside the point if Iran or Russia have taken sides . It is Syrians who are suffering under Assad and it is the world that has allowed him to murder civilians for 9 years with impunity. This dictatorship is not about sectarian tensions any more then the Nazi holocaust against the Jews can be reduced to "sectarian tensions"! This is about a mass murdering genocidal police state regime[ like Stalin or Pol Pot] out to eliminate any and all opposition to its power!
Isis grew out of Iraq[ the Sunnis were being persecuted by the government we imposed in Iraq] because Assad and the west were indifferent to Sunni's fanatics murdering and enslaving other Sunni's in Syria. Assad went after everyone else . Until isis started going after westerners, and entered "our Iraq" that is. Then that became our only interest in Syria.
We paid lip service to wanting Assad out ,but all our actions were the opposite. We never really helped the rebels but from the get go, took the position that things could be worse if Assad were toppled. What is worse then murder by torture, barrel bombs, starvation , chemical weapons etc. but we keep making that claim. , We keep saying Assad has won yet the refugees are still streaming out and the fighting continues. The reality is the west seems to really be fine with watching a holocaust against Sunnis go on for 9 years already. We've lost our humanity when it comes to Syria.

See all work by Margot Patterson

1
9/11 led to a more militarized United States. Can we do better with Covid-19?
2
U.S. sanctions against Iran continue a decades-long failed policy
3
U.S. belligerence toward Iran is a failure of moral leadership
4
America’s anti-Islam problem didn’t end with the cancellation of ‘Roseanne’
5
The end of the Iran deal means more violence for the Middle East