The Editors: War in Syria is not the answer 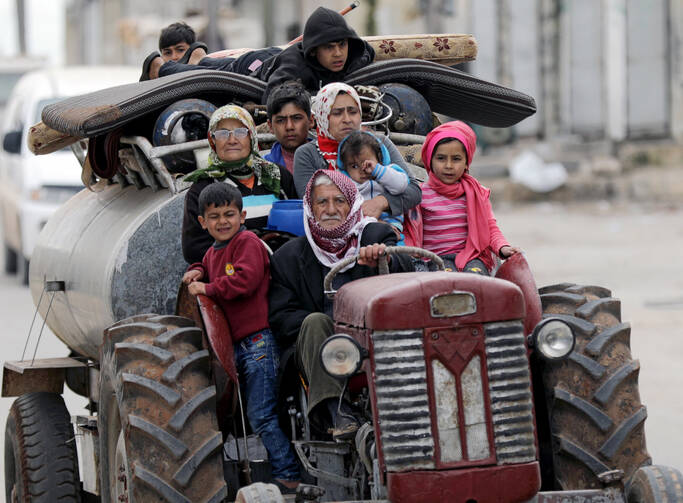 In the aftermath of President Donald Trump’s public suggestion on Sunday that Syrian President Bashar al-Assad would be made to pay a “big price” for the government’s use of chemical weapons in Syria’s ongoing civil war, the international community has braced for another limited U.S. military strike against Syria. The presumed goal would be to remind Mr. Assad that his actions have consequences and that the United States will not stand idly by while chemical weapons are used in violation of international law and previous agreements with Syria. President Trump has also publicly taunted Russia: “Get ready Russia, because they will be coming!”

But is the best solution to this ongoing problem the use of military force? Can a resort to force at this point be justified, either morally or pragmatically? It should go without saying that Mr. Assad’s actions must have consequences, lest the world’s geopolitical bullies be emboldened further, including Syria’s ally and sponsor, Vladimir Putin. But the unforeseen consequences of military strikes make it clear that the jus ad bellum precepts of just war theory cannot be fulfilled in this circumstance. There is no real probability of success in stopping Mr. Assad or preventing future atrocities through a use of limited force.

If the aims of the United States are humanitarian and sincere, it cannot continue to bar the innocent bystanders of this conflict from the refuge they so desperately seek.

The presumed value of proving to Mr. Assad that his warmaking capacity will be compromised if he flouts international law is severely diminished by the danger of provoking a far more perilous conflict if U.S. weapons accidentally kill Russian or Iranian soldiers. Russia has already publicly vowed to retaliate if its troops are harmed.

One could hardly give Mr. Assad a greater public-relations boon—or a pretense to strike with chemical weapons again while the world teeters on the break of global war. The material effect of a missile strike would also be limited—and Mr. Assad knows the United States has no stomach for another ground war in the Middle East—perhaps even for the kind of sustained aerial campaign that could significantly cripple the war-making capacity of government forces.

For the nation’s credibility and for its moral probity, the Trump administration must stop treating Syrian refugees like terrorist threats rather than war victims deserving of sanctuary.

It is also worth asking whether this represents a moment of last resort with Mr. Assad. Further sanctions—including ones aimed at Russia, whose malign intentions in Syria seem clear—remain an option. So, too, does the possibility of creating an international coalition to pressure Syria militarily, rather than relying on unilateral action and online bluster. Unfortunately, only last week Mr. Trump instructed his military advisers to begin planning for the withdrawal of the 2,000 U.S. soldiers currently in Syria assisting anti-ISIS efforts—the opposite response from this week’s bellicose threats, but equally damaging for the stability of the region.

Crucial, too, is proving the sincerity of U.S. aims on the international stage after previous ill-fortuned interventions in the region in recent decades. By last fall the United States had spent an estimated $2.2 billion supplying weapons to various factions on the ground in Syria, roughly three times the amount of humanitarian aid offered to Syrian victims of violence. Imagine if the U.S. military infusion was matched dollar-for-dollar by humanitarian aid. When our weapons expenditures are three times our spending on basic human needs, we can hardly claim our goal is first and foremost to alleviate the suffering of the people of Syria.

Finally, both for the nation’s credibility and for its moral probity, the Trump administration must stop treating Syrian refugees like terrorist threats rather than war victims deserving of sanctuary in the United States and elsewhere according to the dictates and intentions of international law. If the aims of the United States are humanitarian and sincere, it cannot continue to bar the innocent bystanders of this conflict from the refuge they so desperately seek.

I have a feeling that the only thing the editors are consistently doing is being anti-Trump. The editors haven't a clue what would work so lets bash Trump.

If only Trump would learn to lead from behind or have strategic patience, all would be well.

Update - Apparently Russia, Iran and Turkey have met to determine the fate of Syria and will rebuild it according to their plans. The United States was not consulted.

"[humanitarian intervention is ] ... a duty for nations and for the international community"

Drew Christiansen SJ has parsed this to mean that a military intervention may be per se a humanitarian intervention and that John Paul made it clear with his use of the phrase that such a duty to intervene is not incumbent upon just the international community but upon individual nations. See "How To Think About Humanitarian Interventian", National Catholic Reporter , August 22 2014

Your editorial so myopically focuses on consequences that the phrase "duty" as used by St John Paul is consigned to uselessness. Indeed Christiansen states that a nation with the means to intervene should intervene , citing the United Nations adoption in 2005 of The Responsibility to Protect. He concludes that when there is an obvious humanitarian crisis and the international community is hamstrung (Russian Veto in the Security Council?) that then the duty or responsibility to protect compels unilateral action by the most capable nation(s)

At this point in time it would be more ethical to target Assad and his circle of people and then move everyone out of Syria so as to totally destroy the entire Country.

Why don't the Editors demand proof that the Assad regime was behind the latest attack? Is it not strange that the two times President Trump has tried to disengage (at least in words) from the disaster in Syria "chemical attacks" have followed a few days later (April of 2017 and 2018)? Is Assad desperate to jeopordize the result of a war he has in his pocket -after much sacrifice- and shame his most powerful ally, Vlamir Putin, in the process? It does not make sense. But it starts to make sense when one remembers that among Assad's enemies are al-Qaeda and the CIA. It's a historic and undeniable fact that the terrorist organization and intelligence agency have worked together in the past against allies of Moscow (Afghanistan in the late 70's and early 80's).

Have the editors forgotten about the lies and fake evidence presented by the Bush administration and the intelligence agencies to justify the invasion of Iraq in 2003? Fifteen years later, the government does not even bother to fabricate evidence: if you don't believe the propaganda, you are accused of being a Russian agent or a Putin puppet by the presstitutes in the mainstream media.

Is Putin the most sinester character in this story? There are still Christians in Syria today thanks to Putin. It was not he who started the conflicts in Aghanistan, Iraq, Libya, Syria, Yemen, Pakistan and the Ukraine. For example, and correct me if I'm wrong, but it was the Obama administration that armed to the teeth the head-chopping, child-crucifying, church-burning "moderate" rebels in Syria. And it is Trump administration today that makes record arm sales to the Salafist kingdom of Saudi Arabia that is starving to death the people of Yemen.

Shame on President Trump for betraying the people that voted for him in order to avoid that warmonger and crook Hillary Clinton reach the White House. The world is no safer with him than with Hillary and her occultist inner circle.

Nothing that humanitarian interests want to do for the suffering people of Syria can be started in any concrete way without a cease fire.

Trying to reach an agreement for a cease fire on all of the active fronts in Syria, where few of the different fronts even involve the same sets of antagonists, is a challenge that should interest the most masterful negotiator. As a strategy step in reaching an overall policy objective, interest in achieving it might well attract the brightest minds and bravest souls. But in a situation in which the policy objective has not been defined, where no coherent picture of the desired state-of-being has even been imagined, the hope of attracting the interest of the brightest and bravest seems wan indeed.

One of the principal factors providing strategic advantage to those interested in impeding a cease fire is a well defined policy objective that serves to unite them in resolve. That objective is maintaining and even restoring the Assad regime. Whatever policy differences might exist among Syria, Iran, Hezbola, Turkey and Russia on other matters, can be put aside to achieve the one policy objective that will neatly serve all of their current vital interests in Syria.

Not so with respect to those advocating for a cease fire primarily for humanitarian reasons. Even if unity of purpose can be achieved for a cease fire, and even if unity of purpose can be achieved for ending the Assad regime, this cannot possibly be a rational desired end-state for the U. S. and whichever allies the U. S. might persuade to join in any necessary effort to achieve it. The reason is simply that the absence of a central government of genuinely Syrian origin and composition in Damascus will create a yawning power vacuum, the filling of which might well be at least as repulsive as the present regime. It goes without saying that the humanitarian catastrophe might even grow, considering the possibility that we might witness not only Syrian refugees, but also Kurdish, Lebanese, and who knows, even Israeli and Jordanian.

If the support for interventions in the affairs of other countries are in the interests of serving the larger aim of doing the work Christ left for us, then such intentions will also be supported and brought to fruition by the Holy Spirit and such human efforts of service are those which God will reward.

However, and this seems much more the case, if it is actually serving the aims of the international corporate elite who have been infiltrating and overseeing Western governments for some time now, and carried out for profiting motives of greed and power — then it will not succeed. Nor should it ever.

Given the circumstances we daily face, in which there are many things we are not being told, and plenty of deception spread through “official” media sources, these pleas for intervention are also designed to sway Christians by targeting their own compassionate and humanitarian impulses to, hopefully, give their assent… Well, these tactics have worn thin long ago.

The demonization of Russia and Syria has been fomented by the nation-states of NATO in their hungry quest for overthrow and control. And as citizens of those nations, we will have much to answer for in God’s eyes.