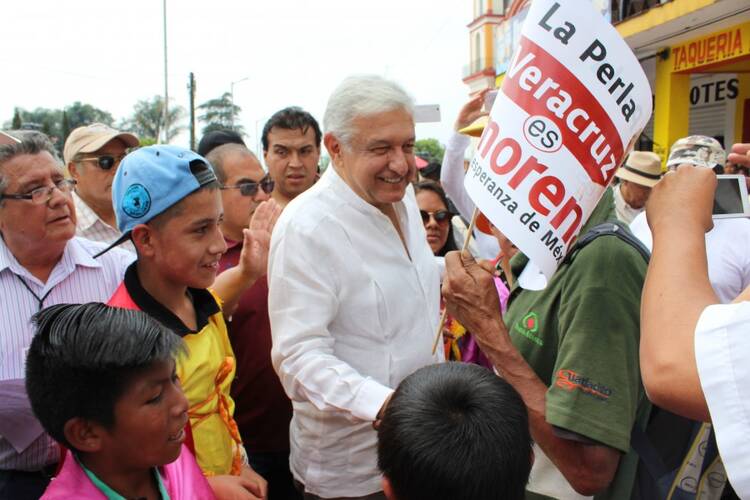 Wearing a wreath of purple flowers presented to him by indigenous women, Andrés Manuel López Obrador took the stage on March 26 in Ciudad Mendoza, in Mexico’s Eastern Gulf coast state of Veracruz. He spoke for 45 minutes, a monologue thundering across the central plaza of this small town through speakers with the volume dialed up to barely tolerable levels.

The undisputed leader of the Mexican left was visibly at ease. He railed effortlessly against Mexico’s political elites and viciously derided President Enrique Peña Nieto. He denounced corruption and the selling out of Mexican national industries to foreign companies. He promised grants for students, pensions for the elderly and wealth for the poor. And, without naming him, he mocked Donald J. Trump with a sarcastic wave of his right hand.

It was a stump speech, one the former mayor of Mexico City (2000-05) has given countless times over the past two decades, but his supporters cheered as if it were his first.

“¡Es un honor estar con Obrador!” they yelled. “It’s an honor to be with Obrador!”

The crowd of at least 500 people was sizeable for Ciudad Mendoza, a town of 35,000 surrounded by spectacular mountain ranges, just over 150 miles east of Mexico City. It was the enthusiasm of those who believe they are supporting a winning ticket.

“Our politicians are stealing from the people. We need it to stop.”

As next year’s presidential election draws ever closer, “AMLO,” a popular nickname built on Mr. López Obrador’s initials, is seen by many to be the number one candidate to become Mexico’s next president. Early polls give him and his Movement For National Regeneration (Morena) a slim lead in the contest over the ruling Party of the Institutional Revolution (P.R.I.) and the opposition conservative National Action Party (P.A.N.).

“We support him because we believe he will end corruption,” said 59-year-old Marco Eliseo Paredes, a factory worker. “Our politicians are stealing from the people. We need it to stop.”

Should he indeed be victorious next year, the third time would be the charm for Mr. López Obrador. He finished a close second in 2006 and 2012, then running on a ticket of the leftist Party of the Democratic Revolution (P.R.D.), which he left in 2012 to found Morena and which now polls a distant fourth. In a country where presidents are constitutionally barred from re-election after serving a six-year term and candidates seldom run more than once for the highest office, his continuous presence on the national electoral stage has earned him the nickname “the eternal candidate.”

Unflattering though that moniker may be, it also underscores Mr. López Obrador’s enduring appeal. An increasing number of Mexicans see him as an alternative to what they consider to be a corrupt and deeply dysfunctional political elite interested only in enriching itself. Case in point is Mr. Peña Nieto himself, the most unpopular Mexican president in recent memory, whose approval rating hovers in the low 20s.

After assuming office in 2012 with grand promises of reform and economic growth, his administration is now bogged down in rising criminal violence, corruption scandals and, most recently, widespread unrest over a sudden increase in gas prices. Moreover, while a lagging economy and low oil prices have spurred federal austerity measures and states such as Veracruz, Chihuahua and Nuevo León are bankrupted by malfeasance and fiscal irresponsibility, not a week goes by without a federal, state or municipal official causing public outrage for buying mansions in swanky neighborhoods, going on expensive vacations and shopping trips to the United States or buying their offspring sports cars.

Mr. López Obrador capitalizes on that discontent by presenting himself as an outsider, even if the 63-year-old is very much a political veteran in his own right. He spent years cultivating an almost saintly image as an austere, sincere man of the people. During his tenure as mayor of the nation’s capital, he was never scrutinized for a luxurious lifestyle; he famously used a simple Nissan for transportation.

Mr. López Obrador capitalizes on that discontent by presenting himself as an outsider, even if the 63-year-old is very much a political veteran in his own right.

His past policies also work in his favor. As mayor, he provided social security and cheap public transportation, extended the clogged city’s road network and worked to renovate its colonial center.

His political agenda, outlined in his latest book, 2018 La Salida (2018 The Exit), revolves around creating broad social programs for the working class, which he says he will finance by “ending” the corruption for which he blames the political elites. He promises a referendum on some of Mr. Peña Nieto’s reforms, such as ending the 80-year-old state monopoly on oil production, which he and many of his followers blame for January’s sudden rise in gasoline prices.

“López Obrador has profiled himself as a sort of political messiah,” said Fernando Dworak, a political scientist and commentator. “His discourse is based upon constantly reminding voters how bad things are in Mexico. It’s anti-institutional.”

As such, he is the perennial archenemy of Mexico’s political elite, Mr. Peña Nieto’s P.R.I. and the conservative P.A.N., who call him a “danger to Mexico” and liken him to socialist leaders such as the late Venezuelan President Hugo Chávez. In the past, businesses joined the fray, nervous of the vision of Venezuela-style expropriations under a leftist AMLO-presidency.

Through the experience of two unsuccessful campaigns, Mr. López Obrador now appears fully aware of the danger of such comparisons and is careful not to antagonize the country’s business elites. “Businesses are not the enemy!” he shouted during the rally in Ciudad Mendoza. Indeed, an increasing number of business leaders are rallying around the leftist leader, including billionaire Ricard Salinas Pliego.

“López Obrador is not bad for businesses,” said Nancy Guerrero Martínez, a 38-year-old restaurant owner attending the rally in Ciudad Mendoza. “What he wants, and what I believe he can achieve, is more transparency and make politicians more accountable. He would be bad for businesses that sign crony contracts with government officials that stifle competition, that have caused the prices of basic services and products like gasoline to rise. That’s bad for the economy.”

AMLO has also been compared to President Trump, mostly because of a shared attitude against their nations’ institutions and the powers-that-be and the tendency of both to throw out the established political playbook. Mr. López Obrador himself dislikes the comparison; in February, he visited the United States to show his support for Mexicans who feel threatened by Mr. Trump’s anti-immigrant rhetoric, while also criticizing the Peña Nieto administration for not showing enough spine in the face of the new U.S. president.

“Trump and López Obrador do have a lot in common,” says Fernando Dworak. “They both talk about restoring the glory days of their countries’ past, their distaste of institutions. But AMLO has been far more consistent in his [rhetoric] than Trump. His economic nationalism is...more akin to the typical populist leaders that Mexican had in the past. He is the last leader of the Mexican masses.”