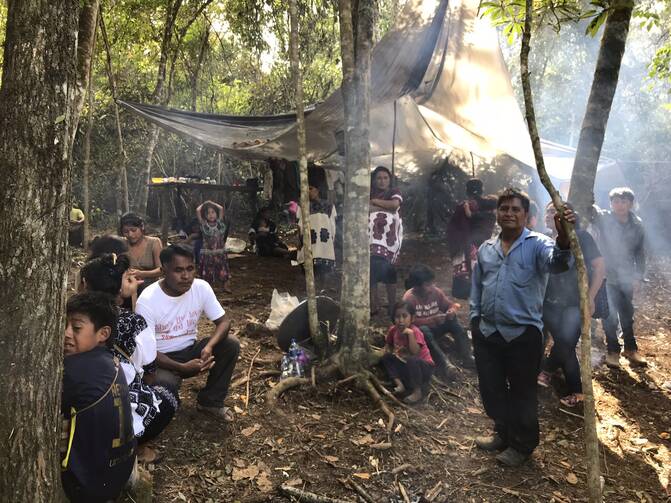 Escaping paramilitaries, Tzotzil Mayans in Chiapas have been scattered in small camps in the area surrounding the town of Chalchihuitán. Photo by Jan-Albert Hootsen.

Verónica García cradles her baby on her lap, wrapped in a blue blanket from the cold. She looks tired and speaks with a weak voice. Weeks of living under a plastic sheet in the forests have taken their toll. She had to give birth here several weeks ago, without a doctor present or any kind of medical care after her little boy was born.

“It’s been very hard,” she says in Tzotzil, her native Mayan language. “I’ve barely slept since I came here, since my child was born. There’s not much food and it gets cold at night, but we’re afraid to go to the town. It’s safer here.”

Ms. García is one of approximately 5,000 indigenous Tzotzil Mayans who since late October have been scattered in small impromptu camps in the area surrounding the town of Chalchihuitán, in Mexico’s southernmost state of Chiapas. They say they were chased out of their homes, only several miles to the south, by unknown gunmen after the escalation of an old land dispute.

They have lived in squalor ever since, in small, makeshift tents, with little food and no sanitation or water. Exposed to the elements at night, they sleep on the ground. The few blankets they have are reserved for the elderly, children and pregnant women. Most of the displaced people are subsistence farmers. They do not speak Spanish and were already among Mexico’s poorest and most marginalized indigenous communities before they were forced out of their homes.

Approximately 5,000 indigenous Tzotzil Mayans have been scattered in small refugee camps in the area surrounding the town of Chalchihuitán, in Mexico’s southernmost state of Chiapas.

Their living conditions have taken a deadly toll; at least 11 people died since the refugee crisis began, according to the Rev. Marcel Pérez, a parish priest and head of the social ministry of the Diocese of San Cristobal de las Casas. Ten of the victims, including several children, died as the result of cold and malnourishment, he said. Another adult male victim was shot to death when the first communities were attacked by the gunmen.

“The situation is severe; the refugees urgently need help,” Father Pérez said during a recent visit of America to Chalchihuitán. “They’re in need of food, clean water, blankets.”

Father Pérez has been tending to the camps since the first refugees arrived in Chalchuihuitán, but he told America that the diocese lacks the resources to provide all of the refugees with proper care. He said his most important work is to make the outside world aware of what he considers to be a looming humanitarian crisis, sending photos and videos of the camps via social media to journalists and human rights activists. Despite his efforts, the refugee crisis has received relatively little attention in Mexican and foreign media, he said.

“It’s important that the world knows what’s going on here,” he said. “We can’t just be indifferent to the plight of these people.”

The origins of the conflict that provoked the villagers’ dislocation date back to 1973, when the Mexican Agrarian Reform Secretariat decided on the boundaries between the municipalities of Chalchihuitán and Chenalho. The decision was historically rejected by inhabitants of the latter, and conflict over the land redistribution has periodically led to tension and spats of violence between both towns.

An agrarian tribunal ruled in favor of Chenalho on Dec. 13, determining that the original 1973 ruling in favor of Chalchihuitán was erroneous and transferring the 740 acres of land to the other municipality. By then, Chalchihuitán had already been flooded with people escaping the violence.

Conflicts over land are a common occurrence in Chiapas, one of Mexico’s poorest states. While the rest of the country steadily modernized during the 20th century, Chiapas retained many of its old colonial traits. Rich landowners still controlled large plantations, forcing the impoverished indigenous population into quasi-servitude until only decades ago.

Although the arrival of the socially conscious bishop Samuel Ruiz and an indigenous uprising in 1994, led by the guerilla of the Zapatista Army for National Liberation (EZLN), ultimately pushed the state toward some degree of economic development, Chiapas’ indigenous inhabitants remain among the poorest and most marginalized in the country. Education and medical care still lag behind the rest of the country; discrimination against indigenous people is still widespread.

According to the refugees and the Diocese of San Cristobal, the most recent outburst of violence in Chalchuihuitán started when unarmed and masked gunmen began shooting at homes in small, rural villages in the surrounding area. According to dozens of refugees America spoke to in five of the camps, the attackers are paramilitaries, allegedly retired soldiers who were armed by the municipal authorities of Chenalho to seize the land residents of Chalchuihuitán had been living on.

America was unable to reach the Chenalho municipal authorities for comment over the Christmas holiday.

The first attacks occurred on Oct. 18, but more attacks occurred in the weeks that followed. The Chalchuihuitán refugees said that they can still hear gunfire at night, and Father Pérez warned that several other nearby communities are in danger of being abandoned soon.

“We can’t go back; they are still shooting at our homes; they are killing us,” said Flor Pérez Hernández, who sought refuge in another camp with approximately 200 others. “We can still hear the shots every night. We’re afraid.”

A short drive through the surrounding countryside and towns showed no sign of armed paramilitaries, although heavily armed soldiers were patrolling the main roads. Several miles south of Chalchihuitán, however, there were signs of recent violence.

At a junction where, according to members of the local parish, gunmen just a few days earlier had set up a road block, several homes were riddled with bullet holes. At least a dozen bullet casings and an unfired bullet could be found on the ground nearby. Other homes showed signs of ransacking; their doors were broken open with force and the floors were riddled with pieces of broken furniture and personal items. The buildings and roof of another house were black with burn marks; the parishioners said the house had been set on fire several weeks before.

Father Pérez said that the attacks on local villages and the flight of their residents follow a chilling pattern. According to him, the same events played out in the months before the massacre of Acteal, an indigenous village some 20 miles to the east. On Dec. 22, 1997, a paramilitary group called “Red Mask” slaughtered at least 45 members of the pacifist Catholic group Las Abejas (“The Bees”), including children and pregnant women, with the alleged complicity of local police and soldiers standing idly by.

“I’m worried for what may come in the next weeks,” Father Pérez said. “The authorities have to intervene. The paramilitaries must be disarmed, and the refugees must be allowed to go back home.”

On Dec. 22, after a visit to Chalchihuitán, federal undersecretary for human rights Roberta Campa announced a plan to disarm the gunmen, followed by the announcement on Dec. 27 from the Chiapas state government of its willingness to negotiate an end to the conflict and the safe return of the people from Chalchihuitán. But according to text messages from Father Pérez on Dec. 28, the conditions for the displaced Tzotziles has not changed.

“I just want the violence to stop and the gunmen to disarm,” said Verónica García on the refugee camp on the hilltop, cradling her baby. “I just want to go home.”