Infographic: A Latino future for the church and society 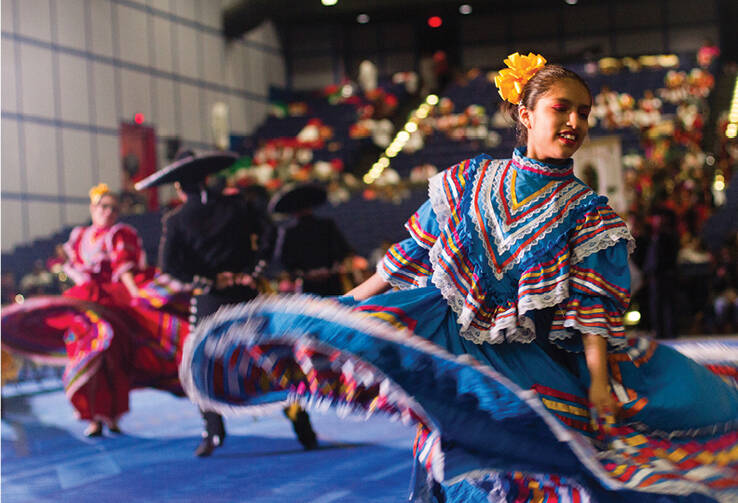 A baile folklórico dancer with Balet Alianza Latina performs during a celebration honoring Our Lady of Guadalupe, patroness of the Americas, in Houston in December 2016. (CNS photo/Victor Aleman, Angelus News)

They are America’s second largest ethnic group, but have no common racial identity. They are America’s latest immigrant wave to transform the country, but some have lived in this land since before the United States existed. They have gone by many names—Hispanic, Latino, Chicano, even the awkward and bureaucratic “Spanish-Surnamed Americans.” But regardless of what they are called, people of various Latin American origins are living in and changing the United States.

The most important distinction among Latinos is national origin. According to the 2010 census, 63 percent of the U.S. Latino population is of Mexican origin, dwarfing all other groups. The runners-up are Puerto Ricans, at 9.2 percent, with Cubans and Salvadorans coming next at 3.5 and 3.2 percent. There are distinct patterns of regional settlement. The Pew Research Center found that while Mexican-origin people make up the overwhelming majority of the Latino population in California, Latinos of Dominican or Puerto Rican origin are the largest groups in New York.

The diversity of national origins contributes to the lack of a more powerful Latino cultural or political voice in the United States. While there are are many overarching cultural similarities in all of Latin America, notably a historical attachment to Catholicism, different Latino groups bring different cultures and face dramatically different experiences in the United States.

63 percent of the U.S. Latino population is of Mexican origin, dwarfing all other groups.

Nowhere are these differences more evident than in the migration histories of these groups. Since 1961, two years after the Cuban revolution, Cuban-Americans have mostly been welcomed as refugees from communism.

In sharp contrast to the welcome given other Latino immigrant groups, under the “wet foot, dry foot” policy, Cubans who made it to U.S. shores were given legal residency and a path to citizenship. (Those picked up on the ocean, even in the surf, were returned to Cuba.) But Hondurans and other Central American nationals have been turned back despite the fact that their home nations regularly appear at the top of the list of the world’s most dangerous countries.

The politics of immigration plays a large role in the U.S. Latino community, especially for Mexican-Americans. The undocumented population of the United States is 76 percent Latino. Twenty-eight percent of all immigrants in the United States are Mexican; around half of these are undocumented. The majority live in U.S. territory that used to make up the northern half of Mexico.

Among DACA recipients, 79.4 percent are Mexican immigrants. The now-embattled program has had a positive impact on its overwhelmingly Latino recipients. Mixed-status families, in which one or more parents are undocumented but which include one or more children who are U.S. citizens, are common in the U.S. Latino experience. Between 2010 and 2012, 23 percent of deportations removed the parent of a U.S. citizen.

In contrast to Mexicans, Puerto Ricans are free to come and go to the mainland because of their status as U.S. citizens. Despite this freedom, one unknown to other Latino groups, Puerto Ricans have struggled over the question of independence or statehood. The urgency of the issue has been underscored by the experience of many Puerto Ricans after the devastation left by Hurricane Maria and the U.S. government’s ineffective response.

Yet all these dynamics are changing. Despite their large numbers overall, migration from Mexico is in decline. Today, Central Americans from the so-called Northern Triangle countries of El Salvador, Guatemala and Honduras are the fastest growing Latino group in the United States. And the comparably easy path to citizenship that defined the Cuban experience for decades was ended by President Obama as part of his effort to normalize relations with Cuba.

Now even some Cubans are entering the United States as undocumented immigrants. Emma González, the Parkland shooting survivor advocating for gun control, may be a better representative of the future of Cuban-American politics than Senator Marco Rubio. And while Latinos are long associated with East Coast cities, Florida and the former Mexican territories in the Southwest, the largest Latino population growth is actually occuring in the rest of the South, while the three counties showing the largest percentage growth in the U.S. Latino population between 2007 and 2014 were in North Dakota.

Shared experiences contribute to a uniquely American understanding of Latino identity. Despite the headlines and reports on undocumented immigrants or the beliefs of some of the fans of the border wall proposed by the president, the largest source of growth in the U.S. Latino population is not immigration, but births in the United States. Over one third of all U.S. Latinos are still under 18; six in 10 are younger than 33. In an otherwise aging population, the Latinos of the United States are a young people. America’s Latinos are also increasingly assimilated, with record numbers speaking English, a trend driven by the young.

Discrimination and achievement gaps persist. Despite recent progress, Latinos continue to have the highest high school dropout rates out of any major ethnic group. A Pew survey found that even as Latinos question their future in the United States under the Trump administration, most of them identified education, not immigration, as the most important political issue to them.

Latinos are underrepresented in national politics. Though they represent over 17 percent of the population, Latinos make up just 8.4 percent of members of Congress. Yet that number, too, is slowly changing, with more Latino “firsts” in politics every election cycle, from Massachusetts to Virginia to Kansas, and more on the horizon, notably in the Latino-heavy districts of California and Texas.

Within the Catholic Church, Latinos are on the path to becoming the new majority; among Catholics under 30, 52 percent are Latino. That is why the geographic center of the church in the United States, long located in the Northeastern and Midwestern cities where Irish, German, Italian and Polish immigrants settled, is moving south and west, toward the U.S. Latino heartlands.

In a way, the demographic movement is a restoration of what once was. Catholicism was first brought to what is now the United States by Spanish-speaking people, and many of the cities of the Southwest built by Spaniards, Mexicans and indigenous people—Santa Fe, San Francisco, Los Angeles and San Antonio among them—were built around Catholic parishes and missions. That Catholic Hispanic heritage rivals the Anglo history most U.S. schoolchildren are taught.

But despite the apparent vibrancy of Catholic Latinos, there are also worrying signs. Pew reports that the number of Latinos who identified as Catholic fell 12 percent in just four years, from 67 percent in 2010 to 55 percent in 2014. Many convert to Protestant denominations; many, especially the young, are leaving religion altogether.

For the church, then—and the broader U.S. society, from its media to its political system—opening up opportunities for Latinos will be critical to institutional success over the 21st century. The presence and continued growth of Latinos in the United States is a demographic reality. Regardless of how they entered the country or where they came from, Latinos are here now, participating in and contributing to life in the United States. And Latinos are here to stay.