Washington needs to abandon the wall and focus on Dreamers 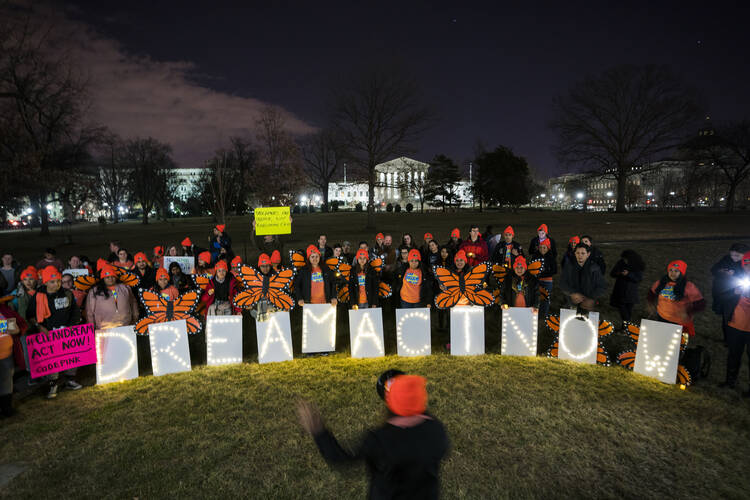 Demonstrators calling for new protections for recipients of the Deferred Action for Childhood Arrivals program gather outside the U.S. Capitol in late January in Washington. (CNS photo/Jim Lo Scalzo, EPA)

It is about 2,000 miles from Washington, D.C., to the U.S. border with Mexico, about the same distance as the wall that the Trump administration and some in Congress want to build along that border. However, the divide is much wider between what many of our political leaders in the nation’s capital want and what border communities desire.

This reality was brought home during the recent debate over the fate of undocumented young adults known as Dreamers, in which the White House and Republicans demanded—and to which the Democrats too easily agreed—$25 billion for a border wall. Thankfully, the president and his staff overreached their stance and demanded cuts to legal immigration as well, ruining their chance to get their wall paid for by U.S. taxpayers.

Notwithstanding that using these young people as barter for a wall is cruel, this so-called compromise did not consider the interests, or views, of the more than seven million U.S. citizens who live along the border and would have had to deal with the political deal’s long-term ill effects. What some in Washington fail to understand is that what may seem painless to them has real consequences for residents along the border.

Walls tend to drive desperate migrants, led by smugglers, to more remote and dangerous parts of the border.

Instead of constructing further barriers, border residents have attempted to build bridges and peace among the peoples on both sides. An expanded wall would obstruct that process. This does not even consider the damage a wall would have on the environment and on property rights along the border. And lest we not forget, walls tend to drive desperate migrants, led by smugglers, to more remote and dangerous parts of the border. After the United States began constructing walls in urban areas along the border in the mid 1990s, the number of crossings in desert areas spiked, resulting in the deaths of at least 7,000 and perhaps more than 10,000. Blaming migrants for their own fates is easy for some, but residents along the border do care if their region is a death trap.

Building a wall also ignores the fact that immigrants crossing the border illegally has significantly decreased over the past 10 years. According to a study by the Center for Migration Studies, since 2008 net migration from Mexico is down 11 percent, with 1 million less undocumented Mexicans living in the United States. (In fact, the number of persons overstaying their visas now exceeds the number of border crossers each year, with two-thirds of the documented who have arrived since 2014 having entered the country legally.)

Despite these facts, a border wall seems to be the only aspect of immigration on which some politicians can focus. This is easier than trying to tackle the complexity and multi-layered reality of immigration. The mantra “secure the border” has become an excuse to not address other aspects of our broken immigration system and move reform forward.

The Editors: Trump is asking the nation to make an impossible choice on immigration
The Editors

As Pope Francis and the U.S. bishops have advocated, the best way to secure the border over the long term is not to militarize it but to address the reason migrants come in the first place: persecution and extreme poverty in their home countries.

If our elected officials in Washington truly want to reform U.S. immigration laws, they will abandon the politics of the wall and not fund it. Instead, they will focus upon real solutions, with the passage of a clean Dream Act a good first step. Senator John McCain’s bill, which gives Dreamers a path to citizenship and asks for a wide-ranging study of our border enforcement needs, is a good compromise.

If, instead, our elected officials keep knocking their heads against “the wall,” they will continue to give themselves, and the nation, a splitting headache. 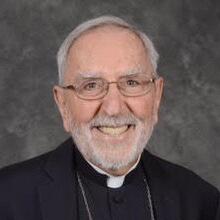 Gerald F. Kicanas is the bishop emeritus of the diocese of Tucson, Ariz.

88% of the Border Patrol say we need the wall. What we should abandon is rewarding illegal aliens for breaking our laws. DACA recipients care about one thing, themselves. They have used billions of taxpayer dollars, American citizens have been victimized by the thousands by illegal aliens. But what matters to illegal aliens is getting as much as they can from any benefits they can get.

40,000 veterans homeless, 1-4 citizens unemployed and this is the priority for the Democrats. Remember these immigrants have cost American taxpayers billions of dollars and could care less. There is an estimated 800,000 DACA recipients in the US. That is 800,000 jobs American Citizens dont have or will be in competition for. There not all picking strawberries they take great Jobs. Good enough jobs to buy homes put their kids through college. So when you hear of the contributions by illegal aliens paying taxes. Remember that also is at a cost in jobs citizens should have.

Some of the costs associated with illegal immigration, we will pass this burden on to our children as has been passed on to us. Weve been paying this for decades.

*The CBO (congressional budget office) estimates it will cost American taxpayers 26 billion over the next 10 years if 1.8 million re legalized.

*The cost of educating illegal aliens children is staggering. From K-12 it costs taxpayers $122,000 for EACH illegal alien student. This does not include the billions spent on bilingual education for illegal aliens.

*Currently city, and state officials are appropriating millions of taxpayer dollars for legal fees to to file law suits and in defense of illegal aliens being deported.

*2012 illegal aliens sent home $62 BILLION in remittances back to their countries of origin. This is why Mexico is getting involved in our politics.

*30% percent of all Federal Prison inmates are illegal aliens. Does not include local jails and State Prisons. At $21,000 per year expense per inmate in Federal PrisonU do the math.

*$3Million Dollars a DAY is spent to incarcerate illegal aliens, I repeat 3 MILLION a DAY to process Illegals in the Criminal justice system.

*$2.2Billion dollars a year is spent on is spent on food assistance programs such as SNAP (food stamps) WIC, & free school lunches.All can be found on google.

It seems you are a paid anti-immigrant troll, or you have a very unhappy life. Take heart, you were fortunate enough to be born in the US.

I'm in favor of a DACA solution and I don't think a wall will do much good. But, I would certainly permit the Trump administration to build the wall, preferably with solar panels, and the proverbial gates for controlled crossings. It would create jobs all along the border and reduce the incentive to trafficking of migrants (and possibly drugs and guns). It is shocking to hear 10,000 might have died in the trafficking. Who could want to incentivize that? I am surprised the Democrats will not make that trade-off, unless they are not really interested in the dreamers but only in having a political cudgel.

Once the wall is built, we can get that political issue off the table and focus on a broader immigration solution, things that are likely to have a much bigger demographic effect.

A wall is a wall regardless of what it is composed of. Having the wall will provide little incentive to anyone to think about a different response that will truly be one marked by justice.

It took a strong anti-communist (Ronald Reagan) to peacefully resolve the Cold War.

it took a strong populist democrat (Bill Clinton) to reform the welfare system.

It will take a President with strong conservative creds in the area of immigration to humanely resolve the problem of illegal immigration.

Give the conservatives what they want (the Wall) and then let Trump reach out to all the hard working illegal aliens and their families with a plan for legal status. It will happen if only the democrat party leadership will get out of the way and let it happen.