After the Vatican hackathon, what does Catholic entrepreneurship look like? 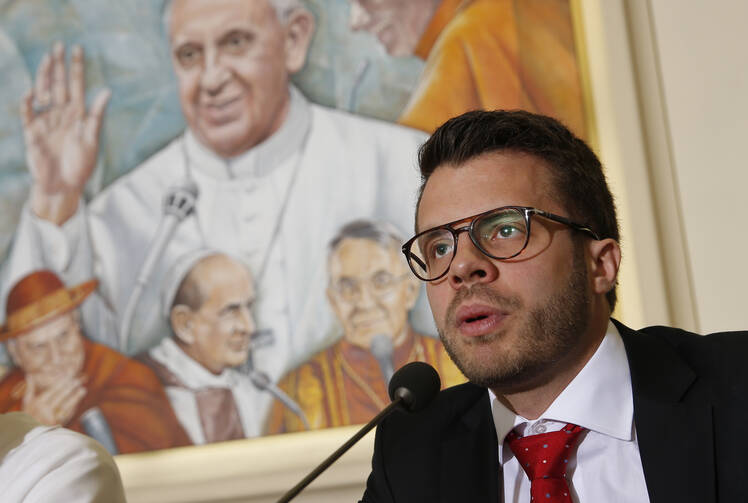 The Vatican just held a hackathon. Take a moment to recover from the shock, as veteran Holy See reporter John L. Allen Jr. had to, and take comfort in the fact that nowadays hackathons are a fairly frequent occurrence in business and higher education. They rarely have to do with acts of criminal trespass. Instead, imagine a large number of talented people crammed into a space, plied with food and caffeine for several sleepless days and nights, self-organizing prototypes that share a certain technology or theme. At the end, there are prizes.

Such was VHacks, as the event last week was called. A student at Harvard Business School, Jakub Florkiewicz, instigated it. About 120 students from around the world participated, representing multiple faiths and none, with sponsorship from companies like Google and Microsoft. Read the report in Wired; you’ll encounter most of the usual hackathon tropes.

The Vatican just held a hackathon. Take a moment to recover from the shock.

Less typical were the location—a hotel near Vatican City limits, principally—and the presence of collared clerics. Significant, also, were the themes, which echoed some core concerns of the current papacy: social inclusion, interfaith dialogue, and migrants and refugees. The award ceremony took place at Borgo Santo Spirito, the Jesuit headquarters, and the next day Pope Francis welcomed the hackers in his Angelus address.

According to one of the clerics present, VHacks co-chairman the Rev. Philip Larrey, some businesspeople have been shaken by Pope Francis’ jeremiads against capitalism. The hackathon was an opportunity to strike a constructive tone. “We have a tremendous tradition that we can draw on in dialogue with business leaders,” Father Larrey told me—a tradition that spans from Pope Leo XIII’s 1891 encyclical “Rerum Novarum” to, more recently, Cardinal Peter Turkson’s document, “Vocation of a Business Leader.”

“We don’t want to ask business leaders to stop making money,” Father Larrey added. “But you have to put the person at the center of what you do.”

What does it mean for business leaders to put the person at the center?

What does it mean to put the person at the center? There are many examples of business among Catholics one might turn to, from the Medicis to Domino’s Pizza. But some cases exemplify more than others how the church’s social mission can translate into distinctive contributions that resonate far beyond the church alone. We need to study these stories more, but rarely have they been adequately told.

One example is that of the communities of Catholic sisters who were among the earliest pioneers in what is now called “impact investing.” More than simply shunning “sin stocks” from their portfolios, they learned to use their collective economic might to positively influence companies toward embracing more prosocial behaviors. This was not just an ethical stance but an economic one, because a more successful ethical business could mean more impact. Now, impact investing is a mainstream activity, and those who benefit from it owe a debt to the sisters’ ingenuity.

I have lately been reading “Whistling in the Wind,” the memoir of the Rev. Albert McKnight, an African-American Spiritan priest who was an architect of the Southern Cooperative Development Fund, a financing organization that helped black farmers buy land and market their crops. As his book makes evident, he was both a prophet and a pragmatist. His entrepreneurship found recognition from President Jimmy Carter, who appointed him a founding director of the National Cooperative Bank.

Impact investing is now a mainstream activity, and those who benefit from it owe a debt to the sisters’ ingenuity.

Father McKnight is one of many little-known heroes of community-based enterprise who shaped our world by drawing on the Catholic economic tradition. Another is the Rev. José María Arizmendiarrieta, founder of the world’s largest fully worker-owned business cluster in the Basque region, the Mondragon cooperatives. Only a short collection of his writings is available in English, and Notre Dame has just published an important study of his Catholic context. There is a cause for his canonization.

One further example of this tradition is that of credit unions. The first such institution in the United States was St. Mary’s Bank in New Hampshire, developed in 1908 from a parish with the guidance of Alphonse Desjardins, who built Quebec’s famous caisses populaires. In turn, Mr. Desjardins first copied his model from the entrepreneurship of a Jesuit priest on Prince Edward Island, George-Antoine Belcourt, S.J. Mr. Desjardins also guided the hand of (Presbyterian) U.S. department store magnate Edward Filene, who coined the term “credit union” and ensured the passage of enabling legislation that would spread the model across the country.

The university is not supposed to be elite. It’s meant to serve.
Nathan Schneider

Credit unions take many forms now, but their origins were specific. According to Mr. Desjardins, “The caisse populaire is truly an organization of the parish.”

All this is to say that a hackathon is only the beginning of what Catholic entrepreneurship can achieve and contribute. This tradition can offer more, also, than just a difference in focus—for instance, turning the attention of hackers to refugees rather than imaginary cats. This tradition has encouraged entrepreneurship that represents a difference in kind from the ambient ways of doing business. It has transformed the possibilities of business for far more than just Catholics.

While I spoke with Father Larrey over transatlantic video, he was interrupted by a phone call. We took a pause, and he reported afterward that the caller was Carlo d’Asaro Biondo, Google’s president of strategic relationships in Europe, the Middle East and Africa, who was one of the key supporters of the hackathon. According to Father Larrey, the message from Mr. Biondo was this: “Let’s make sure that this doesn’t end here.”

There is an imbalance in the income stream. We know something is wrong and we also know that if we put our heads together we can find a solution. As this article mentions in more than one place, budding entrepreneurs need reliable and economical funding sources. Catholic Credit Unions should become Diocesan staples - places where we can share our resources, which can be used to help Catholic and Christian communities.
The sharing of resources was a basic principle in the early church - it brought people together in a secure environment in which they could build their Faith.

@Randal -- the reason that Credit Unions and Payday lenders are successful lies in the first law of "credit" -- know your borrower. I note, however, that a very large cohort of church-related credit unions failed in the period 2008-2016.