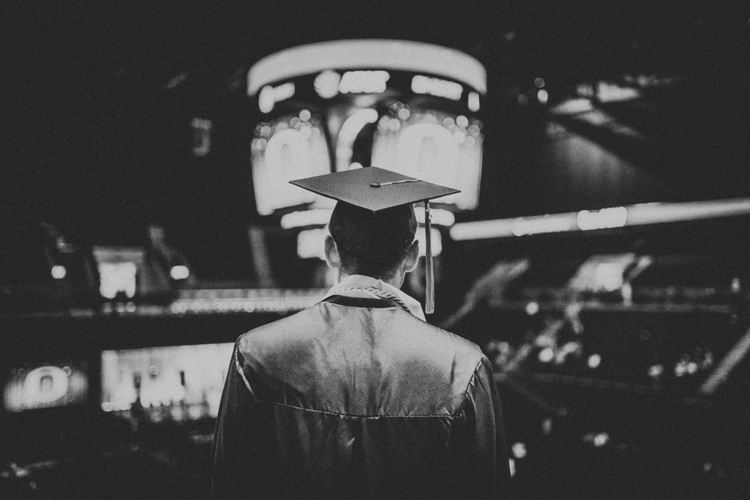 Photo by Cole Keister on Unsplash

This month I have a new title—I am an assistant professor of media studies at the University of Colorado. Day to day, nothing has changed; this semester I am teaching the same classes I taught a year ago, at the same institution, on the same schedule. But now I’m on the tenure track. The sequence of precarious work that has constituted my career and my generation has shifted, for me, to at least the opportunity for stability.

When I received the call in which I learned that this would happen—it was late last year—an unexpected swell of sentiment rolled over me. Less than relief, less than a rational sense of astonishment, that call left me with a sensation of gratitude for the opportunity to serve—to serve the people of Colorado, to serve the state.

I had never been asked to serve before. I came of age in the time of Sept. 11 and the Iraq War, and the president told us to shop.

But there was more at play now than novelty.

More particularly, I thought of my grandfather. I suppose that was a patriarchal turn of mind, but so it goes. He was born not far from where I live, on a farm without electricity. He was smart. He hoped to attend college, and a nearby business school accepted him with an eighth-grade education plus high marks on a correspondence course. His father, who had 13 offspring to account for on a tenant-farmer income, decided to help him.

Then came a hail storm one afternoon when they were out in the fields. The ice-rocks fell and fell. There was nothing they could do. The hail tore the season’s grain crop to shreds and mush. My great-grandfather had to tell his son, through the tears that for once he failed to hold back, that the college idea would not work out.

When I think of serving the state of Colorado, it means serving his state.

His whole life after that, my grandfather watched the consequences unfold. He perceived men with fancy degrees but less competence climbing corporate ladders faster than he did. He bought books full of indexed, opportune quotes from Shakespeare and the classics to pepper his conversation with in lieu of having been taught them. But he did well enough that his three kids could go to good state schools—in the 1960s, a time when state college was adequately subsidized to be in reach for multiple siblings in a one-income family. Compared to today, it was close to free.

I regularly hear students, colleagues and administrators refer to themselves as elite, as if this were uncontroversial.

I see hail storms all over again in my classrooms. First of all, they are present in who is not present; the percentages of Latino and African-American students at C.U. Boulder, for instance, are about half those of the state population as a whole. (The percentages are even lower for faculty.)

And the storms are present in what divides my students. Many come from well-off families, but often the most driven, least conforming minds are caught up working to support their schooling. I hear their eagerness in class, when they are awake, but then I see the effects when I add up the grades. The fact that a student may also be a full-time assistant manager at a downtown clothing store is not part of the calculation. Nor are the students’ mounting debts, which can constrain their life choices for decades. What claims to represent their achievements on paper simply fails to do justice to what they are really accomplishing. And that is when they make it to the end of the semester; sometimes a hail storm, in one form or another, gets in the way of that.

Universities make space for the free inquiry that our politics and markets alone would not know how to value.

Less than 5 percent of the university’s budget comes from the legislature of the state whose name it bears and whose elected regents govern it. And we are far from alone. Public universities all over the country are being expected to behave more like private businesses. Tuition nationwide has risen far faster than families’ incomes—by more than 50 percent in Colorado since 2008. It costs about $30,000 each year to be an in-state student at C.U. Boulder and $50,000 for those from elsewhere.

University people have internalized this. I regularly hear students, colleagues and administrators refer to themselves as elite, as if this were uncontroversial, even in a populist era when elitism is not doing higher education any political favors. We aspire to “selectiveness” and winning sports teams more than enabling social mobility. The truth is that most of us are not economically or otherwise especially elite. Nor can what we do in universities operate for long as an income-generating business like any other. Our job is not to be elite, by some contrived measure, or to out-compete the competition. It is to serve.

The neoliberal sexuality of the left
Nathan Schneider

In cowboy country, inequality is not a bug. It’s a uniquely American strategy.
Nathan Schneider

My other grandfather was a professor at a state university, a devoted and decorated teacher of orbital mechanics and an early environmental activist. He left a more lucrative career in industry to do it. I once heard him express a longing that I might have the privilege of being a professor too, a longing that at the time seemed about as remote and quaint as a wish that I would succeed him in the horse-and-carriage business.

Somehow, it worked out, and I am starting to understand why this profession meant so much to him. Universities are precious institutions that make space for the free inquiry that our politics and markets alone would not know how to value. A hail storm, or other circumstances beyond our control, should not be allowed to stop those who seek to experience this.

I taught for 8 years, 6 years at Fordham, but was never on a tenure track because I didn't have a Ph.D. I loved it but never looked at it as serving per se. I liked the imparting of knowledge and the students eyes when they understood a complicated concept and could communicate it on a test or as part of a project.

The problem of excessive costs at universities is discussed but there is no assessment as to what is causing these increases. Maybe the author could get into this in a future article. From what I understand there is no good reason for these rising costs and they are having a very negative impact on young people during and after completing their education.

I was in Knoxville at the University of Tennessee for a conference the last three years and everywhere there were cranes and cement trucks and workers building new classroom buildings and living facilities. A dorm only 20 years old was being torn down to make room for a new more modern dorm. I wonder if the students appreciate that a lot of their tuition cost has little to do with their education.

Public Universities used to be for the greater good. But the elite have been winning for fifty years, and the future for the middle class doesn't look bright.

For one hundred years [1868- 1967], California taxpayers funded the tuition free, world class University of California, Berkeley, for their children. How was that possible?

Today, Californians and others can't afford to send their children to University. What happened?
The essential bases for the lack of current funding are: the electorate became fragmented [e pluribus multum and a resultant diminution of "sense of collective responsibility"], California became overpopulated, the additional population did not reflect the economic substance and integrity of the population of the first hundred years, immigration driven excess population placed enormous pressure on resources, and drove up the cost of land and derivative costs way beyond inflation, and because millions of the newcomers were poor, their taxes didn't begin to cover the costs of K12, welfare, etc for their families, and many of their children ended up in prison.
As a consequence [somewhat simplified] State funds previously used to support the University were diverted to increased funding of K12, to prisons, and to welfare.

Given the irreversible nature of much of what has happened, the disinterest of the California elite and the apathy of the general populace in supporting an analysis of what happened, to better enable a solution, the future for California middle class students and their parents will be even more financially challenging than it is now.

I'm troubled by the sentence I read early in this piece. I'm gratified that Mr. Schneider deseires to serve the people, not so crazy about his looking forward to serving the state. Serving the state is the goal of the elitism he hopes to avoid. How about serving God? IF he sets out to serve God, everything else will fall into place.....although he may find himself ostracized by the very state he desires to serve. I wish you all the best, Professor Schneider.

Thanks for your concern here; I feel a similar anxiety about serving the state, too, especially a state that seems so unwilling to serve its young people. The whole matter is of course also confused by the dual meaning of "state" as a) government, and b) territory/community. I'm not entirely sure which I mean here.

I'm a retired Special Education teacher who taught brain damaged students in an approved private school. Our students came from many school districts which were unable to properly educate the students. Many of our children were from impoverished families. It was challenging, but like Professor Schneider I felt that the community of students with both their joys and their struggles was the essence of my career.