Three years later, how the Chibok girls have become a symbol of resilience 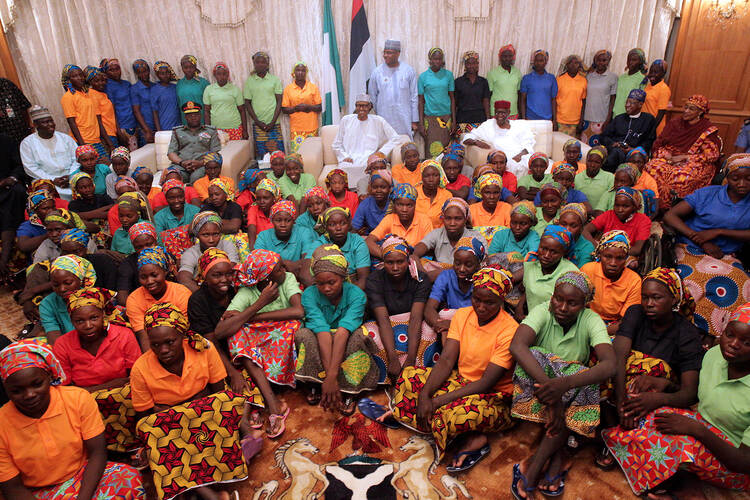 A group of Chibok girls are seen with Nigerian President Muhammadu Buhari in Abuja, Nigeria, May 7. The girls were held captive for three years by Boko Haram militants. (CNS photo/Bayo Omoboriowo via Reuters)

When news broke of the abduction of 276 girls from their boarding school by Boko Haram militants in the middle of the night on April 14, 2014, a visceral anger and profound sadness welled up inside me. Why such violation of innocent schoolgirls? It could have been me.

I, too, went to boarding school in Nigeria with other teenage schoolgirls. Back then our dreams were boundless as we imagined a future full of hope and promise. Like us, the Chibok girls, as they have come to be known, had dreams. They dreamt about becoming doctors, teachers, lawyers, nurses, architects and much more. On a continent where education is denied to millions of children, these girls were among their community’s best and brightest. They worked hard to build a more secure future for themselves and their families.

The Chibok girls are a picture of the women in Africa who dream of a better future with passion and compassion.

Then, abruptly, in one night of terror, their dreams were shattered by gun-toting fanatics of a deranged religious ideology. The kidnapping of these innocent girls sparked global outrage echoed by the rallying cry #BringBackOurGirls.

The Chibok girls are a picture of the women in Africa who dream of a better future with passion and compassion, yet are held captive by a conspiracy of attitudes, beliefs and practices that relegate them to a marginal status as lesser beings. Examples are not hard to find. Consider the bizarre case of Ghanaian schoolgirls who are banned from crossing a river to go to school during their menstrual period. Or South Sudanese school-age girls prized for their economic value as child brides. Or Kenyan girls abducted from school and subjected to female genital mutilation. For all of these girls and many more, #BringBackOurGirls resounds.

Faced with a multitude of obstacles, African women and girls remain resilient.

Faced with a multitude of obstacles, African women and girls remain resilient. Over the last three years, several Chibok girls have been released or have escaped. Some of the girls enrolled at the American University of Nigeria. They have excelled in their studies, just as their captive colleagues would have done had they been given a similar opportunity. There are still 112 girls in captivity, and the Nigerian government is doing all it can to free them.

Other Chibok girls were given the chance to study in the United States. They, too, have demonstrated the indomitable spirit of the African woman and shone in their studies. One of these women, Sa’a, captured this spirit when she said: “My dream is I want to become a doctor, by God’s grace. And I’m working toward that right now...not only to be a doctor but also to be an inspiration for girls back in Nigeria or children who couldn’t get the opportunity to go to school.” The fate of her kidnapped colleagues remains etched on her consciousness: “I might have been one of those that died. I might have been one of those girls who came back home with babies.”

The Catholic faith upholds the inalienable dignity of women and men created in the image of a loving God. Scripture reveals that God’s precious gift to us is life. I imagine how God must feel when he looks at what the Chibok girls have experienced.

When evil acts deny the dignity of the human person and impede human flourishing, like Boko Haram did to the Chibok girls, God’s dignity is violated. And, like Rachel of the Old Testament, God laments inconsolably with the agonizing cry “Bring back our girls!” Wherever and whenever women are held captive, our real and ardent desires must echo this lament of freedom and cry for life. 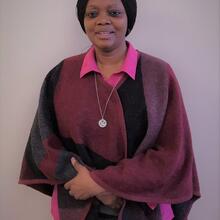 Anne Arabome, S.S.S., is a member of the Sisters of Social Service of Los Angeles and the associate director of Faber Center for Ignatian Spirituality at Marquette University.