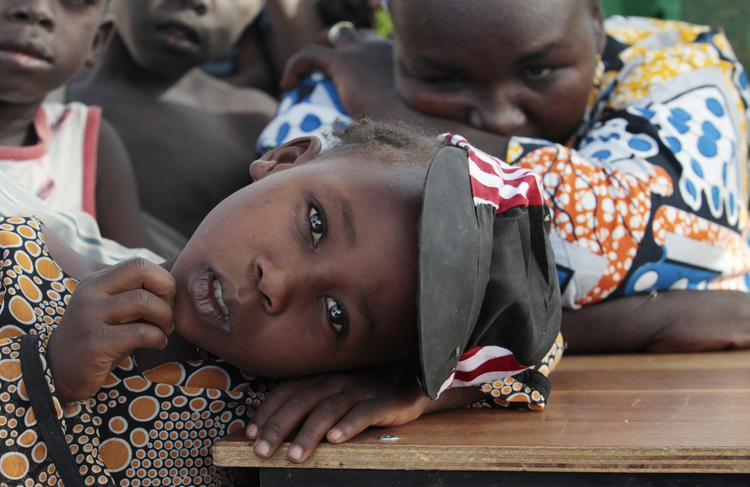 Agbonkhianmeghe E. Orobator, S.J., is a Jesuit priest and writer from Nigeria. This speech was delivered at the Vatican on March 8 at the Voices of Faith conference marking International Women’s Day.

I stand here as the odd one out, yet truly blessed, grateful and privileged to share this podium with such a diverse and global group of distinguished and accomplished women. I salute and honor the causes and commitments that you promote and represent for our society, our church and our world.

The invitation to this event came by way of what perhaps should have passed as an inconsequential initiative. As you may recall, in April 2014, the dreaded and infamous terrorist group, Boko Haram, abducted and kidnapped 276 schoolgirls in Chibok village in northeastern Nigeria. That event triggered a global manifestation of outrage and solidarity—outrage against a brazen act of religious banditry and jihadist zealotry; solidarity for the innocent teenage abductees and their families. The resulting international social-media campaign, #BringBackOurGirls, attracted high-profile global support. Callous and depraved as the act seemed at the time—and still does 388 days later—I felt strong indignation and frustration because of the nonchalance and indifference that characterized the response of the Nigerian government.

Being a Jesuit, my role and ministry involve denouncing injustice and social ills that violate the message of the gospel of Jesus Christ, which is a message of compassion, care and solidarity with the most vulnerable. My faith compels me to speak out and act on behalf of justice. So, I wrote an open letter to President Goodluck Jonathan of Nigeria, demanding his immediate resignation on account of gross dereliction of his constitutional duty to protect the Chibok Girls.I was quite aware of the risk involved; and my superiors were also aware and informed. I knew I could have been arrested or intimidated by the government, but it was a price worth paying for the cause of justice, which I deeply believe in as a Jesuit.

Initially, in my letter, I contended that the reaction of the president and commander-in-chief of the armed forces of the federal republic of Nigeria would have been significantly different, that is, urgent, resolute and relentless, had one of the abductees been the president’s daughter. Come to think of it, I argued, what parent would go to sleep, occupy himself or herself with petty political chores, while their daughter languished in the forest stronghold of a murderous gang driven by a nihilistic sectarian ideology? Yet, on deeper reflection, the sad reality was not that the Chibok girls were not daughters of wealthy and powerful politicians; it was simply that they were girls—people who society and culture actively conspire to downgrade their social premium and human dignity to that of second class citizens: children, as it were, of a lesser god. Unless and until we confront the misguided belief that the girl-child simply does not count in the order of gender priority, the impunity of groups like Boko Haram, the Taliban, Al Quaeda and Al-Shabab and their trademark fanaticism will continue.

Thus I have come to the conclusion that the abduction of the Chibok Girls is a consequence of a prior violation of the fundamental human rights of the girl-child, especially her right to education. Statistics on this matter don’t lie. Sub-Saharan Africa records the lowest enrolment ratios of girls and the lowest rate of completion for girls in primary and secondary education compared to boys (The UNESCO Institute for Statistics, Global Education Digest 2011).

There are underlying factors that militate against the education of the girl-child that we may not simply overlook or ignore. Many societies in sub-Saharan Africa peg the value of a girl-child on the economic return projected to her physiognomy, including the tone or complexion of her skin, and her stature. When educated, as in some parts of Nigeria, her “market” value is calculated based on her level of schooling.

The frustration of women’s dream for education emerges from the same combination of cultural prejudice, social indifference, economic miscalculations, political ineptitude, religious fanaticism and sectarian hatred. Put together they militate against the chances—however little—of the girl-child in quest of education for integral human development and social transformation. We are familiar with the slogan that the development of a nation is premised on the imperative of educating the girl-child: educate a girl and educate a nation! Though repeated with regularity, this slogan only seldom translates into reality, because the equation is heavily rigged in her disfavor.

The forces arrayed against the education of the girl-child are legion and formidable. To quote the British prime minister, David Cameron, in the aftermath of the horrific massacre at a school in Peshawar by Pakistani Taliban in December 2014, “it is horrifying that children are simply killed for going to school.” The horror of such attacks carries a significant gender quotient, because the odds, risk and toll rise significantly when those school children are girls. Although the perpetrators of terror facilely and routinely anchor their brutal assault of the educated girl or woman on religion, I remain convinced that the gods are not to blame. And this is my second conclusion: the drivers of destructive gender-based violence run deep in the collective socio-cultural psyche. Truth be told, any society that relegates women to a secondary status and allots them menial tasks, creates propitious conditions for gender-based violence and morally depraved ideologies to emerge and thrive. In the final analysis, I find profoundly disturbing not only the fact that the educated woman is perceived as a threat to such ideologies, but also the sad realization that such ideologies render the educated, independent and competent African woman an endangered species. It would take an equally compelling counter-narrative to prise open the stranglehold of sectarian ideologies, banditry and zealotry that weighs heavily on the fate of women, especially in developing countries.

Promoting this counter-narrative is key to a change of mentality. We need strong and bold voices of faith, hope and charity, of women re-reading and reinterpreting the sacred texts of world religions, challenging the centuries old and regnant patriarchal, misogynistic hermeneutics to which societies and cultures have become almost accustomed, and modelling in creative and innovative ways the possibilities and potential of an indestructible and creative female spirit, unfettered and unbowed by expectations of a dominant male class.

Three years later, how the Chibok girls have become a symbol of resilience
Anne Arabome

As a race, notwithstanding the unparalleled technological advancements of our times, we still remain largely uneducated in the art of honouring the dignity of woman, reverencing her unbowed spirit and upholding her inalienable rights to common social goods. Unless and until we excel in this kind of education, I submit, our world would remain half-finished, incomplete and violated.

We have to bring back our girls—all of them!

Agbonkhianmeghe E. Orobator
Show Comments (
2
)
Comments are automatically closed two weeks after an article's initial publication. See our comments policy for more.
Chris Pramuk
6 years 2 months ago
"Promoting this counter-narrative is key to a change of mentality." Amen. Though you don't say it explicitly, Fr. Orobator, your last few paragraphs convince me you would include in this counter-narrative and (theological) "art of honouring the dignity of woman" the need to reclaim biblical images and narratives of the feminine divine, long suppressed in our church, especially in the West. Thank you for your very powerful and prophetic witness. I wish I had been a fly on the wall to hear you give this address, and in this location especially. It is crucial, I think, for men (and clerics) in positions of relative prominence in the church to join their voices in bringing to life this counter-narrative that feminist writers, poets, artists, and theologians have been creatively weaving for decades. http://www.hopesingssobeautiful.org/index.php/2015/03/09/the-images-we-live-by/
Luis Gutierrez
6 years 2 months ago
In Africa, as in all the other continents, the male-only priesthood is part of the legion of formidable forces against the integral human development of both girls and boys. This is not only about the girls; the boys are also harmed when they succumb to the "idolatrous male."