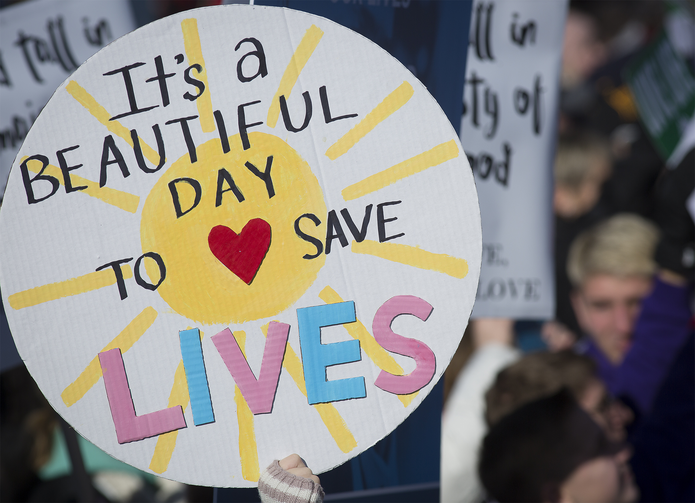 A pro-life sign is displayed during the annual March for Life rally in Washington Jan. 19. (CNS photo/Tyler Orsburn)

More than 800 students and faculty from at least 15 Jesuit universities and high schools gathered to pray together at Mass in Washington, D.C., this morning before joining the 45th annual March for Life, demonstrating against abortion and for the defense of human life. (Full disclosure: I presided and preached at the Mass.)

Students said that coming to Washington to participate in the march gave them a sense of the breadth of the pro-life movement and renewed their commitment to pro-life activism and service as they returned to their schools.

Rockhurst’s group of 43 students traveled 22 hours by bus overnight to attend the march.

Lilly Lutz, a leader of the pro-life group from Rockhurst University in Kansas City, Mo., said that they would focus on “promoting life from womb to tomb,” doing service visiting the elderly in nursing homes and supporting a local organization the assists formerly imprisoned women in addition to their work opposing abortion.

Rockhurst’s group of 43 students traveled 22 hours by bus overnight to attend the march. Stuart Hilton, another Rockhurst student, attended the march for the first time this year and said the energy of the other marchers and the rally left him feeling “fired up.”

Some students had reservations about politicians whose pro-life commitment was too narrow.

Grayson Huldin, a senior at University of Detroit Jesuit High School, said that Jesuit education had taught him to see pro-life activism as an act of love and not just a political position.

Bianca Passero, a leader of the Boston College pro-life group, explained that the Jesuit focus on care for the whole person encouraged their group to work on life issues across the spectrum, including suicide prevention, opposing the death penalty and advocating for students with disabilities on campus. Currently, they are also working with administrators and other campus groups to create a resource guide for pregnant students to connect them to sources of support on campus and in the surrounding community.

What does it mean to love our enemies in the abortion debate?
Sam Sawyer, S.J.

During the rally at the start of the march, there was much excitement as President Trump spoke to the crowd via video from the White House Rose Garden, becoming the first president to visually address the March for Life. Students appreciated the energy at the rally, and several pointed to a personal story hared by Rep. Jaime Herrera Beutler as the most memorable moment. Rep. Beutler spoke about her decision to continue her pregnancy with her daughter Abigail, despite doctors advising her that Abigail had no chance of survival. After arguing for an experimental treatment, she was able to carry the pregnancy to term, and Abigail is now a healthy 3-year-old.

Some students, however, had reservations about politicians whose pro-life commitment was too narrow. Ms. Passero appreciated President Trump’s efforts to limit abortion, but she said that she thought of the president as “anti-abortion but not necessarily pro-life” because of his positions on immigration and funding for children’s health care. In her view, he “needs to take a more holistic view of pro-life if he’s going to call himself a pro-life president.”

Sam Sawyer, S.J., is an executive editor at America.