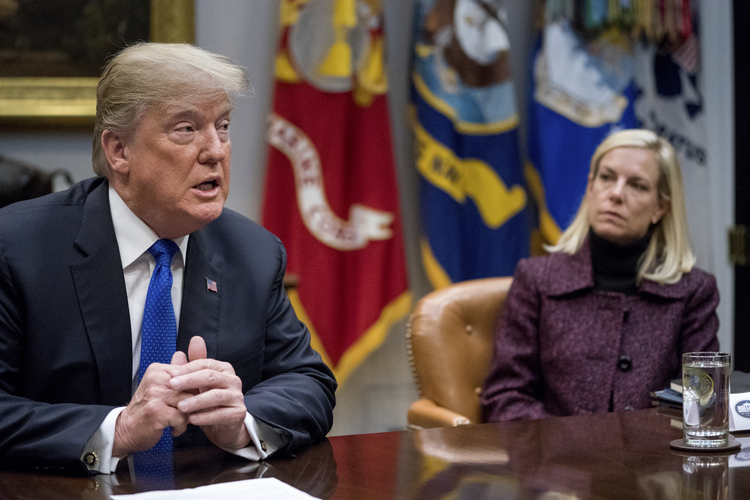 In this Thursday, Jan. 4, 2018, file photo, President Donald Trump, accompanied by Secretary of Homeland Security Kirstjen Nielsen, right, speaks during a meeting with Republican Senators on immigration in the Roosevelt Room at the White House in Washington. The Trump administration faces a Monday, Jan. 7, deadline on whether to extend protections that would allow nearly 200,000 Salvadorans to stay in the U.S. legally. Nielsen, who is tasked with making the decision, told the Associated Press last week that short-term extensions are not the answer. (AP Photo/Andrew Harnik, File)

Officials say the Trump administration is ending special protections for emigrants from El Salvador, forcing nearly 200,000 to leave the country or face deportation.

El Salvador is the fourth country whose citizens have lost Temporary Protected Status under President Donald Trump. They have by far been the largest beneficiaries of the program, which provides humanitarian relief for foreigners whose countries are hit with natural disasters or other strife.

A decision to force the Salvadorans back to their native country would represent a serious challenge for El Salvador, which depends on remittances from wage-earners in the U.S.

In November, the administration ended protections for citizens of Haiti and Nicaragua. Citizens of Honduras may be next.

End of Temporary Protected Status could send 50,000 back to Haiti
Tim Padgett

Two U.S. officials discussed the decision with The Associated Press on condition of anonymity because they were not authorized to speak publicly before the announcement.

One official said Salvadorans will have until September 2019 to leave the United States or adjust their legal status. Secretary Kirstjen Nielsen faced a Monday deadline whether to grant an extension.

TPS is a TEMPORARY program to help people in emergency situations. The emergency in the case of El Salvador dates back to an earthquake 17 YEARS AGO.

I like the concept of an emergency immigration allowance for poor people suffering from disasters, but in order to make room for new people to come, we have to return people back to their country of origin once the disaster in their country is over. This is common sense.