Border bishop pleads for TPS leniency for the sake of children

Border bishop pleads for TPS leniency for the sake of children 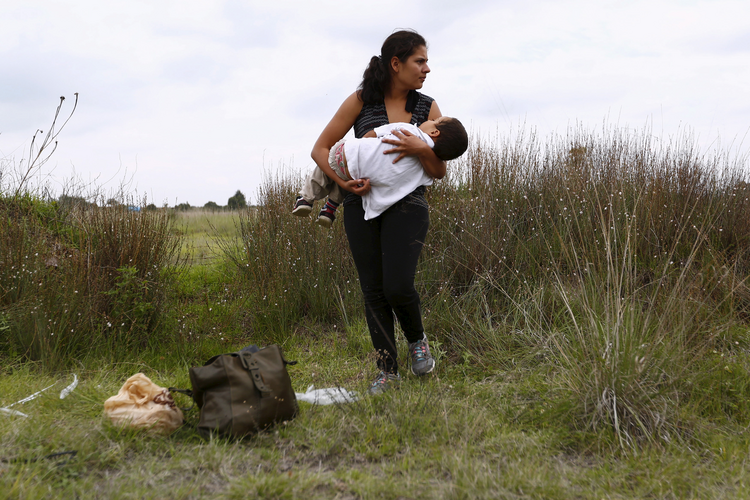 A Salvadoran immigrant carries her son in a field in Huehuetoca, Mexico, while trying to reach the U.S.-Mexico border in 2015. (CNS photo/Edgard Garrido, Reuters)

WASHINGTON (CNS) -- Days before the U.S. Department of Homeland Security decides whether to extend or terminate a special immigration status for some 200,000 Salvadorans in the U.S., a border bishop pleaded with the Trump administration to think about the well-being of the immigrants' children who are U.S. citizens.

In a Jan. 2 opinion piece for the Washington-based political website The Hill, Bishop Mark J. Seitz of El Paso, Texas, said he worries for families in which some members are U.S. citizens and others have a less permanent immigration status.

He asked what will happen to the children of Salvadorans who have Temporary Protected Status, known as TPS, if the program ends and people are forced to return to their homeland. TPS grants a work permit and reprieve from deportation to certain people whose countries have experienced natural disasters, armed conflicts or exceptional situations so they can remain temporarily in the United States.

"A question that burns in my heart is what will happen to these children if their parents are ordered back to El Salvador? What will become of their futures?" Bishop Seitz asked in the opinion piece.

"A question that burns in my heart is what will happen to these children if their parents are ordered back to El Salvador?"

DHS was expected to decide by Jan. 8 what to do in the case of Salvadorans with TPS, but various groups in the country, including a national coalition of cities and counties, are clamoring to allow them to stay.

"The Salvadoran TPS recipients we represent have deep roots in our communities. Allowing their TPS status to expire will divide families and harm our cities. Salvadoran TPS recipients have lived in the United States for an average of 21 years and have 192,700 U.S.-born children," said a letter issued Jan. 3 by Cities for Action, which includes signatures from 19 bipartisan mayors of major U.S. cities including New York, Chicago, Los Angeles, Houston and Washington.

Salvadoran TPS recipients arrived in the U.S. because of war, earthquakes and other natural disasters, as well as increasing gang violence plaguing the Central American nation.

"These individuals took refuge in our city and have since become deeply embedded in our economy, houses of worship, schools and neighborhoods," said New York City Mayor Bill de Blasio in the Cities for Action letter.

Salvadoran TPS recipients arrived in the U.S. because of war, earthquakes and other natural disasters, as well as increasing gang violence plaguing the Central American nation.

In his op-ed, Bishop Seitz cites the economic contributions of the recipients and said their absence, should TPS end for them, will be felt financially and directly in certain industries, such as home health care and construction, not to mention the loss of taxes they pay to the local and federal government. But there's a more noble and Christian reason to help TPS recipients, he said.

"How we treat the most vulnerable in our society is reflective of who we are and whether we have learned anything in the 2,000 years since the birth of another immigrant child, born in a stable because his parents could find no room for him at the inn -- an event we have just celebrated," he wrote.

"In my role as a bishop of the Catholic Church, I have served and stood by countless Central American families. I have been a guest in their homes and at their first Communions, graduations, confirmations, weddings. I have seen these families flourish despite incredible obstacles," he continued.

"How we treat the most vulnerable in our society is reflective of who we are and whether we have learned anything in the 2,000 years since the birth of another immigrant child."

Ending TPS for Salvadorans would mean putting the lives of the parents as well as their children at risk, and permitting the "possibility of being hunted by gangs and identified for extortion, gang recruitment and worse in a country that they don't call home," he added.

In 2017, Bishop Seitz and other bishops traveled to El Salvador and Honduras "to examine conditions on the ground in both countries and to assess whether those conditions merit an end to TPS," he said.

Their delegation determined "large-scale protection issues if TPS holders are forced to return to their home countries, particularly El Salvador," he said in the op-ed.

"Will these families face separation and breakdown, so that their U.S.-citizen child can access the benefits of an American education? Or will families stay together and leave to their parents' home countries, facing a decided lack of opportunity and, worse, extreme violence and possible exploitation? The end of TPS for El Salvador would force such a heartbreaking decision upon thousands of families," he wrote.

He said he met with youth "who tearfully explained to me why they attempted to migrate north, forced out of their homes, extorted by gangs. I have heard from young girls who faced sexual assault and domestic abuse; teenage boys have spoken with me about being afraid to go to school because of the fear of encountering gangs on the way and having to pay daily to enter and leave their neighborhood."

If TPS for Salvadorans is not extended, those forced to leave and their U.S.-born children will face those conditions, too, he said.

"Worse, they may be targeted precisely because of their U.S. citizenship status, their American habits and their English-language skills," he wrote. "I steadfastly pray that our national leaders do not turn their backs on these children by closing the door to their parents."