End of Temporary Protected Status could send 50,000 back to Haiti 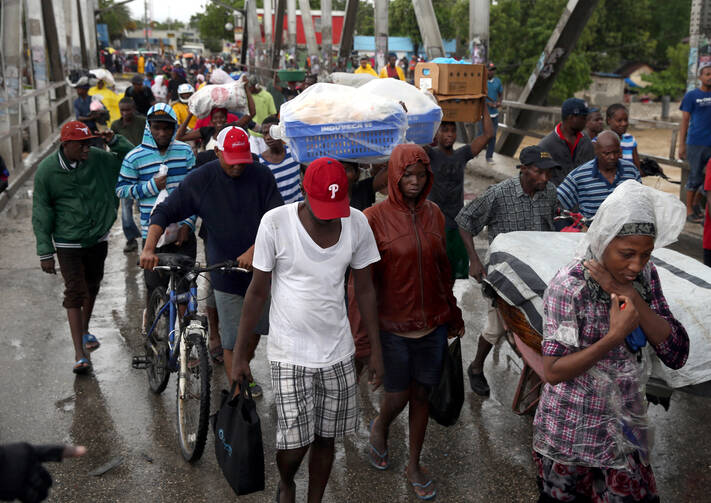 People cross a bridge over a rushing river as part of evacuations during Hurricane Matthew Oct. 4, 2016 in Port-au-Prince, Haiti (CNS photo/Orlando Barria, EPA).

Farah Larrieux came to Miami in 2005 because, as a TV reporter in Port-au-Prince, Haiti, she felt threatened during the violent political turmoil of that period.

In 2010, her visa about to expire, Ms. Larrieux was facing deportation when a catastrophic earthquake struck Haiti, wrecking the country and killing more than 200,000 people. The Obama administration soon granted Temporary Protected Status—T.P.S.—to some 50,000 Haitians living in the United States. This meant they would not be forced to return to their country under those horrific conditions.

Ms. Larrieux was among them. “I’ve made a productive life here,” she says, pointing to community service and achievement awards on her wall, some from her time as the host of a Haitian affairs show on local public television.

T.P.S. for Haitians like Ms. Larrieux was renewed every 18 months, and not just because of the earthquake. A cholera epidemic, last year’s Hurricane Matthew devastation and new political upheaval—Haiti was without an elected president for a year until Jovenel Moïse was sworn in last February—have made Haiti not only a dicey place to return to but one not ready to take back 50,000 people at once.

A cholera epidemic, last year’s Hurricane Matthew and political upheaval has made Haiti a dicey place to return to.

But the Trump administration now believes otherwise. For the moment—unless President Trump changes his mind this month—it is poised to let T.P.S. run out for Haitians on Jan. 22. They will then have to go back to Haiti, the Western Hemisphere’s poorest country.

“You feel like your life is collapsing,” says Ms. Larrieux.

Almost 300,000 others from Latin America and the Caribbean may lose their T.P.S. benefit next year and face deportation. They include 200,000 people from El Salvador and 60,000 from Honduras; the administration has already announced it will end T.P.S. status for 2,500 from Nicaragua. Many, like Ms. Larrieux, live in South Florida, which is seeing the most energetic efforts to solve the T.P.S. crisis.

Representative Carlos Curbelo, a Republican from Miami, introduced a bill last month to waive deportation for current T.P.S. holders and put them on a path to legal U.S. residency.

When Congress created T.P.S. in 1990, it unfortunately failed to wed humanitarian intentions to political practicality.

But passage is hardly certain—especially given the anti-immigration mood of the G.O.P.-controlled Congress, where most members consider T.P.S. unimportant to their constituents. Representative Ileana Ros-Lehtinen, a Republican from Miami who is set to co-sponsor a bill similar to  Mr. Curbelo’s and is a critic of Mr. Trump’s anti-T.P.S. campaign, said that on Capitol Hill “there’s not much appetite to help” T.P.S. recipients.

When Congress created T.P.S. in 1990, it unfortunately failed to wed humanitarian intentions to political practicality. Preventing people from nations like Haiti or Sudan from being cast back into natural disaster or political mayhem was of course the right thing to do. But few seemed to appreciate the real potential for Temporary Protected Status becoming a quasi-permanent situation—one that would sooner or later become a target of anti-immigration outbursts like Trumpism.

Still, sending those T.P.S. beneficiaries home seems just as impractical, if not cruel—even when circumstances in their countries improve. Just because Honduras’s astronomical murder rate has dipped in recent years, for example, it does not mean it is safe for Honduran T.P.S. recipients to return to barrios where bloodthirsty gangs known as maras will continue to target them for recruitment, extortion or worse.

Even if that were no longer a risk, there are other reasons for letting T.P.S. holders stay in the United States. Many have put down deep roots in places like South Florida and are important community fixtures: tax-paying business owners, teachers and employees. More important to U.S. foreign policy interests, the money they send home is part of a multibillion-dollar remittance flow that helps countries like Haiti recover more fully from the very catastrophes T.P.S. was set up to address.

So while T.P.S. may have been ill thought out in the long term—and needs to be replaced with a more common-sense approach—Mr. Trump’s effort to bury it looks ill advised as well. As Ms. Larrieux points out, a lot of productive lives are involved.