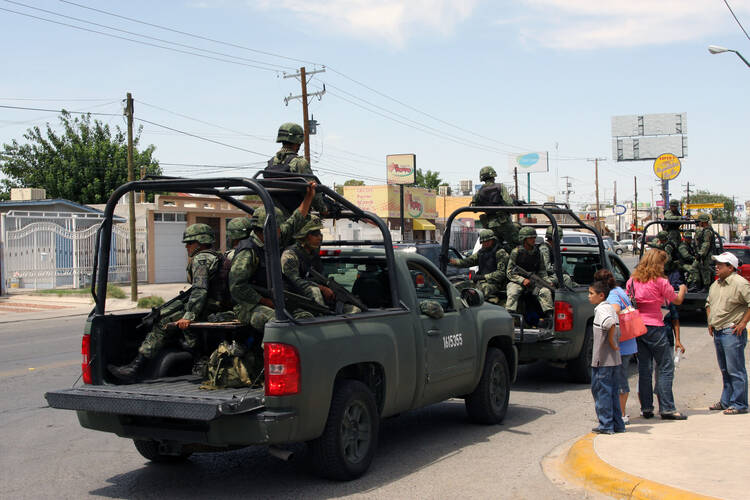 Mexican soldiers patrol the city of Ciudad Juárez during a visit by then-President Felipe Calderon on Aug. 9, 2011. (iStock/vichinterlang)

In the northern city of Ciudad Juárez, just across the border from El Paso, they patrol the streets in armored cars. They maintain heavily guarded roadblocks on the expressways of Guerrero, a state south of Mexico City. In the small town of Badiraguato, situated in the northern state of Sinaloa and cradle of some of the country’s most notorious drug lords, they take off daily in helicopters to patrol the surrounding mountains.

Mexicans have gotten used to the presence of the military in their daily lives, checking road traffic for drugs and guns, scouring rugged hills for poppy and marijuana plantations, and taking the lead in takedown operations of high-profile crime lords. Soldiers have become an essential part of the country’s continuing war against drug trafficking organizations that, according to some estimates, have taken more than 200,000 lives since 2006, with 2017 expected to end as the deadliest year in recent history. Few of their crimes ever lead to convictions.

Soldiers have become an essential part of the war against drug trafficking organizations that have taken more than 200,000 lives since 2006.

Normal as their presence in the streets may seem to most Mexicans, the role of the military in the fight against organized crime has never been entirely clear. In the next few days, however, President Enrique Peña Nieto is expected to sign a law that will finally enshrine their participation in fighting organized crime.

“We need an adequate legal framework that regulates the actions of soldiers, pilots and marines involved in public security tasks,” Mr. Peña Nieto said three weeks ago. “A framework that defines, with absolute clarity, the means and reach of the subsidiary support that the armed forces give today in different states and municipalities.”

The so-called Interior Security Law is one of the most controversial and polarizing pieces of legislation in recent Mexican history. Supporters, including the federal government and a majority of members of Congress, say the law is long overdue and sorely needed to provide clarity to a military that was never trained to do police work in the first place. Critics, however, fear a permanent militarization of the country amid unprecedented levels of violence and thousands of reports of human rights abuses by soldiers and marines.

“What it does is essentially legalizing human rights abuses,” Edgardo Buscaglia, a Columbia University scholar and security expert who has studied the Mexican drug war for years, told America. “The law is a travesty.”

Once the law is passed, soldiers can be deployed anywhere across the country by executive order for a period of up to 12 months, which can be extended as long as the government provides a reason for why it considers the extension necessary. Moreover, military operations can remain classified.

Critics fear a permanent militarization of the country amid unprecedented levels of violence and thousands of reports of human rights abuses by soldiers and marines.

Soldiers were first deployed to battle organized crime in 2006 by then-President Felipe Calderón, first in his home state of Michoacán. Within a few years, tens of thousands of troops were fighting powerful drug trafficking organizations across the country. Their role has become increasingly crucial, as police forces are often poorly trained, outgunned by the heavily armed and ruthless cartel gunmen, and underpaid (especially compared with the military) and susceptible to corruption.

Despite the fact that both the army and navy are among the most trusted institutions in the country and have, in previous years, garnered praise for their participation in disaster relief, their role in battling drug cartels has always been controversial. Human rights organizations have reported thousands of violations by soldiers since 2006, and very few are ever prosecuted.

Human rights groups were joined by the Catholic Church last week, when the Episcopal Commission for the Social Pastoral and the Mexican Episcopal Conference both declared their opposition to the law. “We strongly regret that many things have not changed, and now our concerns have grown,” they said in a joint statement, in which they urged for “legislative actions that, in a package with integral vision, mark a critical route to resolve the causes [of the violence], but also prevent the permanent presence of the armed forces in police functions.”

The military itself is hardly pleased with its expanded role. Successive heads of the Secretary of National Defense (Sedena) and the Secretary of the Navy (Semar) have often complained that their personnel have never been properly trained and prepared for the fight against drug traffickers, and the services have paid a heavy toll; more than 500 soldiers have been killed since 2006.

Defense Secretary Salvador Cienfuegos voiced that frustration in a rare public statement one year ago. “What do we want? We want the armed forces to have a legal framework that supports them when they have to act, and that they’re not criticized for matters that are proper to the operations that we undertake,” he said. “We would love that to be already resolved, we would love that the police did their work, but they’re not doing it.”

Those opposing the law say that strengthening and formalizing the role of the army in the drug war is hardly the perfect solution. Instead, they say, the state should focus on a gradual return of the soldiers to their barracks and strengthening Mexico’s hundreds of police forces. But with the exception of the creation of the Gendarmería Nacional, a small militarized police force, the Peña Nieto administration has done little to improve the quality and efficiency of its police, critics say, instead basically continuing Calderón’s policy of relying on soldiers and marines to do the heavy lifting.

“The army cannot retreat from the streets immediately, that much is clear, but there has never been a real intention to improve the police,” Jorge Kawas, a security analyst based in the northern Mexican city of Monterrey, told America. “In my own city I see them patrolling with the military every day, they work together. [But] there’s no plan to professionalize the police.”

“This law prioritizes the militarization, instead of thinking about better police,” Mr. Machain, of Serapaz, agrees. “What we want is a profound and serious debate, but this debate has never taken place. The government pretends to listen, but none of civil society’s concerns have been incorporated in the law.”