A moral education in the Bitcoin boom 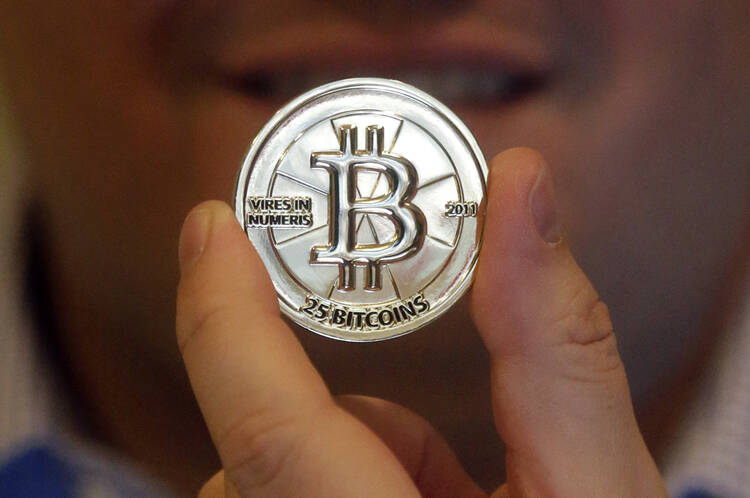 On the late afternoon of Dec. 7, I had an afternoon meeting at my university’s business school. I decided to stay a bit after hours to triage emails in the common area, surrounded by business students scheming up group projects. Our business school, like others I have visited, is adorned with TVs showing stock tickers and business-like shows, as if that is what real business-people subject themselves to all day. (Do they?) As I tried to work, I could not help but notice the CNBC personality Jim Cramer screaming at me from a screen.

Normally I would have little trouble tuning out Mr. Cramer’s shrill act, since I am bored by and inept at the buying and selling of speculative assets. But then I saw the Bitcoin logo next to him. If a mainstream money show is talking about Bitcoin, I figured, there must be something happening. And so there was. The value of a Bitcoin had just passed $17,000 for the first time, and it would soon peak for the day at over $18,000. O.K., fine. I redirected a few tabs on my web browser, and by the end of a few minutes fiddling with a cryptocurrency trading platform, I had added to my cryptographic net worth about one-tenth of an entire year’s salary.

If a mainstream money show is talking about Bitcoin, I figured, there must be something happening.

This is not something I normally do. At least not until recently. Back when I was reporting more actively on the crypto scene, I made a point of not accumulating cryptocurrency in order to protect my journalistic independence. But as Bitcoin and other crypto-assets have multiplied in value in recent months, the tiny amounts I had obtained to experiment with years ago became worth a lot more, and I had to figure out how to steward it.

Similar things happened to friends, and I had enough of a head start that some came to me for advice. I helped one old friend trade what she had in one cryptocurrency to another. To better assist her, I started watching the markets and set up a price alert on my phone. My friend and I agreed: This was not good.

Well, good and not good, like an apple in Eden. It is a world-disturbing kind of knowledge to realize that playing games with imaginary money could be more lucrative than doing actual work.

It is a world-disturbing kind of knowledge to realize that playing games with imaginary money could be more lucrative than doing actual work.

Part of the promise of Bitcoin and its ilk all along was “democratizing finance.” Activities normally reserved for banks and rich people—money creation, early-stage investing, complex financial instruments—would be within reach of anyone able to use the software. Now startups are raising millions of dollars with “initial coin offerings”; major corporations and national banks are getting involved, too.

But it is not just finance that has been democratized (at least to this narrow subset of tech-savvy early adopters). The crypto boom is also democratizing financialization—the process by which playing with money starts to consume more and more of our time and attention and wealth compared to other forms of productivity.

Part of the promise of Bitcoin and its ilk all along was “democratizing finance.”

While reporting on earlier phases of the Bitcoin phenomenon, I saw hackers and tinkerers and idealists turn into overnight currency wonks. It was a kind of education, and mostly for the better; people who live in places with stable official currencies tend to forget how social, political and fragile money really is. Many wanted to put this education toward transformative ends. They believed this technology couldfix what was wrong with finance and unleash the best of our collective intelligence.

Now that their crypto-toys have moved from potentially revolutionary to actually valuable—capable of being traded into something you can use to buy actual stuff—that value is crowding out the tinkering and ideals. Short of revolution, many are settling for a reenactment of pre-1929 Wall Street, free (at least until the feds catch up) from obstructive consumer-protection rules. It turns out to be easier to make a quick buck in this world than to change it.

It turns out to be easier to make a quick buck in this world than to change it.

I try to keep track of who is doing what. Some of the crypto nouveau riche are funding the startups of their dreams. I know one early Bitcoin miner who is using the bounty to devote her time and coding skills to a local nonprofit. Last time I saw the hacker-troll weev in New York, he told me he was “living off my Bitcoins”; he now has the financial freedom to serve as webmaster for the Daily Stormer, a white-supremacist website.

As in previous incarnations of finance, there are some real contributions behind all this virtual value. The technical achievement of Bitcoin has genuine social worth, as does the effort that goes into projects from Coinbase to district0x that make the technology more usable and useful. Starting in Brazil, Moeda has set out to make good on the long-deferred promise that cryptocurrency could bring basic, accountable financial inclusion to the world’s poorest people. The founders have raised $20 million with their initial coin offering.

The promise in this new kind of money—a new kind of social technology, really—is still there, as it has been all along. But that is not what Mr. Cramer was ranting about. For those of us mixed up in the boom, this experience is teaching us something, even if we are still learning what. What we can be sure of is that the old utopianism is done for. This is a tree of knowledge with good and evil on it, and we are in for them both.

A friend of mine, a young pastor of a church, is among those who learned about Bitcoin years ago and is now kicking himself for not having gotten a bunch of it back then. But there is also a memory that gives him pause. It happens that the first funeral he presided over after ordination was for a kid who had been killed by another kid over Bitcoins. What really happened was not clear, but the cause was clear enough.

For him, for those kids and for any of us, that’s it. This is not dreamland anymore. The apple has been bitten.

Bitcoins or money is not wealth. What is wealth is a claim on goods and services. Money and now bitcoins are a temporary claim on these products.

It is based on a collective agreement that this particular item (money) will allow the purchase or acquisition of goods and services. The thing (money) itself is worthless in providing human satisfaction. Knowing that one possesses the power to make these exchanges is however a human satisfaction.

I have found no one yet who can explain bitcoin. It seems to be a mystery to everyone who writes about it.

I am wondering if the world has ever been different, these "easy wealth" things just keep morphing into different forms.

Bitcoin is touted as the non government controlled currency. No banks, no tracking , complete privacy. But the only value you have in Bitcoin is its use to obtain tangible goods and services. Today you can use Bitcoin to buy a Lamborghini in Newport Beach California ...or fly Virgin Galactica, or shop at a major department store.
So the Bitcoin you bought for $1,000 may buy you $14,000 to $18,000 worth of goods and services.
GREAT RESULT ....BUT:
Did you declare your gain of $13,000 to $17,000 on that transaction as "income"?
How long do you think the Federal Government is going to let that realized but unrecorded gain escape taxation?
Surely if the government does not regulate the markets moving the Bitcoins , it will require the suppliers of goods and services to keep and report records of its customers who use Bitcoins and the value of goods sold. Further, in the absence of proof as to what a Bitcoin holder/user paid and when it was paid , then the Government will treat all of that value as ordinary income.

If you compound the taxation issue with the need to control money laundering, criminal use and use by terrorists, then it becomes obvious that there must/will be a system of comprehensive government control over Bitcoin and any other cyber currency. To date much of the value of cyber currencies has been attributed to the lack of government control...its opaque ness......what happens to that value when such government control inevitably emerges?

According to the IRS, "Bitcoin" is property, not currency -- the US Treasury is going to require vendors and transactors in the asset to issue 1099's just like your bank or brokerage firm.

Really love the click to tweets in this article but please use bitly to shorten embedded link- otherwise meaningful text (aka whole quote) is cut off.

I already get my income and pay for stuff with a fiat currency called the US dollar. I can only handle one irrational absurdity at a time.