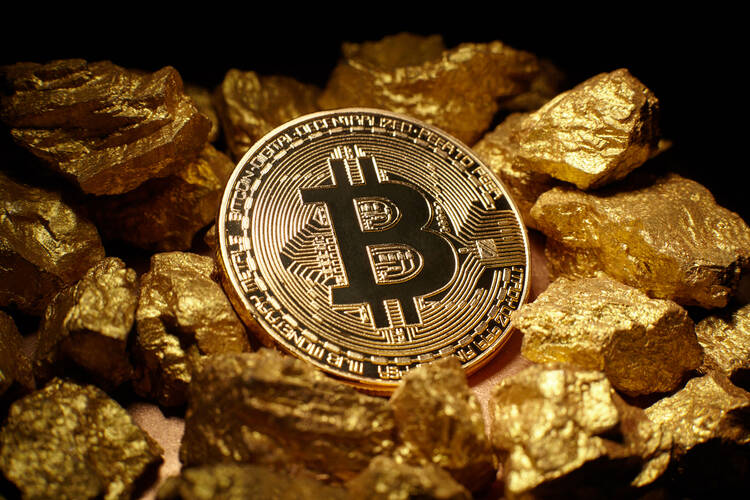 More than 50 years ago, the James Bond movie “Goldfinger” depicted the co-conspiracy of Auric Goldfinger and Chinese agents to blow up the stock of gold at Fort Knox with a nuclear weapon. The Chinese game plan was to render the currency of the United States worthless because the gold supply “backing up the currency” would be destroyed. Of course, no one bothered to inform the Chinese agents that the United States had been off of the gold standard for more than 30 years (at the time of the 1964 movie), so blowing up the gold would have had no effect on the U.S. dollar.

Goldfinger’s motive, however, was more defined: He just wanted to corner the market on gold. By reducing the world supply of gold, his own gold holdings would increase in value.

Gold is no longer the international medium of exchange and does not back any currency. The movement away from precious metals toward cheaper or debased currency was begun, no less, by the Jesuits at Salamanca. During the 16th century, the rising needs of commerce required the use of small change. Obviously, there are limits to which gold or silver coins could be subdivided to facilitate the purchase of food and other small transactions in the expanding marketplaces of the villages. While it was assumed that money should have an inherent natural value, the Jesuits argued that the king could legitimately issue debased coinage, even if it had little inherent value, to facilitate the needs of commerce. The debased coinage had value because the traders believed it had value, and traders trusted that the king would not abuse his privilege of issuing this debased coinage.

The movement away from precious metals toward cheaper or debased currency was begun, no less, by the Jesuits.

Of course, most exchanges of currency with goods or other currencies take place through banks. And banks are regulated and are required to hold reserves of deposits at the Federal Reserve. In return the Federal Reserve acts as a lender of last resort, should there be a run on banks, so that depositors do not lose their deposits. Deposits are also ensured by the Federal Deposit Insurance Corporation.

In the wake of the global financial crisis in 2008, banks across the world became subject to increasing regulation, both in domestic and in international transactions. The new regulations include requirements on holding capital against outstanding loans as well as holding required reserve against deposits.

All of these actions, of course, lead to a “race to the bottom” for banks to move to places with less and less regulation, like Singapore or the Cayman Islands. But why stop there? Why go to another country? Why not shift assets to unregulated cyberspace and undertake transactions in Bitcoin?

Bitcoin functions in much the same way as the gold standard but with a catch. The price of Bitcoin in terms of specific currencies fluctuates, whereas the price of gold was fixed in the classical gold standard period (from the end of the Civil War until the outbreak of World War I). There is Bitcoin “mining,” in which cyber-prospectors can search for this treasure with very complex algorithms, which ensures that the supply does not increase abruptly. There are electronic signatures on Bitcoin that prevent double or triple simultaneous exchanges with the same Bitcoin. Exchanges take place, however, outside the regulation and inspection of individual country monetary authorities. And there are no reserve requirements or transaction taxes, much less deposit insurance.

Bitcoin functions in much the same way as the gold standard but with a catch.

The size of the Bitcoin market today is about $42 billion. To put this in perspective, the amount of base money (currency in circulation plus bank reserves) increased from roughly $700 billion in 2008 to slightly less than $4 trillion in 2017, due to the massive U.S. Federal Reserve credit expansion policies in the wake of the global financial crisis. So the quantity of Bitcoin is still relatively small relative to standard currency measures. But it can grow quickly since there is no supervisory power limiting its expansion.

In some ways, the emergence of Bitcoin recalls the development of the euro-dollar market in the 1960s and 1970s. Nikita Khrushchev wanted to sell gold to pay off international debts of the Soviet Union. Since many European currencies were unstable, the U.S. dollar was the obvious choice to settle gold sales. But having recently promised to bury the United States economically, Khrushchev could not very credibly make large dollar deposits in U.S. banks. So he deposited the dollars in London banks. Soon afterward, U.S. banks started setting up branches in London, to take in dollar deposits. Since these dollar deposits were outside the United States, they were regulated neither by the Federal Reserve nor by the Bank of England (since they were dollar deposits, not sterling deposits). It was a clear race to the bottom by banks. They were able to do business where there was little or no regulation on dollar transactions, thus, free of reserve requirements on deposits and free to lend anywhere in the world, free of any caps on interest rates that were prevalent in the United States (due to laws against usury).

When the price of oil skyrocketed in 1979, members of the Organization of Petroleum Exporting Countries with surplus oil revenues had a problem: What should they do with the vast amounts of money? One option is fast domestic investment at home, but the instability in the Middle East created by the Iranian Revolution made most OPEC countries cautious about spending the money on domestic development. Another option was foreign direct investment. But there are limits to F.D.I. as well, lest the presence of foreign companies trigger xenophobia in the recipient countries. So the OPEC surplus countries put their “petrodollars” in the London-based euro-dollar banks, where they would receive higher interest rates on their dollar deposits than they would in the more regulated banks operating within the United States.

The emergence of Bitcoin recalls the development of the euro-dollar market in the 1960s and 1970s.

Of course, for all the OPEC surplus countries there were OPEC debtor countries. Most of these debtor countries went to the World Bank and the International Monetary Fund seeking loans to pay their oil bills.

Bureaucrats being who they are, however, the World Bank turned down the OPEC debtor countries, telling them that loans for oil bills are not part of their development infrastructure “mission statement.” The I.M.F. officials also refused to make the loans, since the I.M.F. was set up for short-term exchange-rate stabilization.

The real imbalance between US and China? Savings.
Paul D. McNelis, S.J.

Then something happened: Paul Volker became head of the Federal Reserve, the U.S. dollar soared in value, global interest rates doubled and the world went into recession. The value of the OPEC deficit countries debts increased in value (in terms of local currency), the interest rates soared and the market for their non-oil exports fell. We then saw a Latin American “moratorium” on debt payments and advanced countries suddenly stopped lending to emerging markets. Not surprising, the 1980s are called the lost decade for Latin America. All of this is closely tied to the emergence of unregulated euro-dollar banking in London—and I.M.F. and World Bank officials being asleep at the switch.

As more and more exchanges take place with Bitcoin there are increasing risks that a Goldfinger attack, in the form of a cyber-destruction of Bitcoin deposits, much like Goldfinger attempted at Fort Knox, would trigger far-reaching consequences, beyond the realm of the Bitcoin world. Why? As in the case of the Latin American debts, many enterprises that have borrowed in Bitcoin have assets in local currency. We call this phenomenon a balance-sheet currency mismatch. Firms operating in the black would suddenly find themselves in bankruptcy. And there would be no Federal Reserve to act as the lender of last resort for Bitcoin debtors.

What Can Be Done?

Just as British MI-6 agent James Bond saved the world in “Goldfinger” from the hypothetical destruction of the U.S. currency by the Chinese agents, there is need for a global organization to monitor financial activities not only in a globalized financial system but also in the global cyberspace.

The I.M.F. has been called an “empty shell.” When its glass-ceiling headquarters opened in 1976, the raison d’etre of the I.M.F. was to provide short-term lending to safeguard the international monetary system, specifically the Bretton-Woods system of exchange rates fixed to the U.S. dollar. Over the past 30 years, however, it has been operating in crisis-management mode, responding to currency crises from Russia to Mexico. It also serves as a research center and advising facility for central banks around the world. But it is far from being a global central bank envisioned by its founders and has no international supervisory power.

Our Bretton Woods institutions (the I.M.F. and World Bank) were caught off guard in the lead up to the Latin American debt crisis, as the unregulated euro-dollar markets made increasingly risky loans to Latin American countries in dollars. As Bitcoin expands, there is an increasing need to safeguard financial stability against excess risk-taking and new cyberspace Goldfinger attacks against Bitcoin.

There's more to Digital-Currency than Bitcoin. Ethereum (more importantly Ethereum based tokens) is on the ascendency. The truth of the matter is that Bitcoin is far too cumbersome to be a lasting alternative reserve for wealth. The fees are outlandishly expensive to compete with banks. What is interesting is the emergence of decentralized exchanges for Ethereum and Ethereum based tokens. How will an enfeebled clown . . . I mean James Bond regulate that? Good luck, y'all.