At 87, Ethel Kennedy is still ready to fight for justice 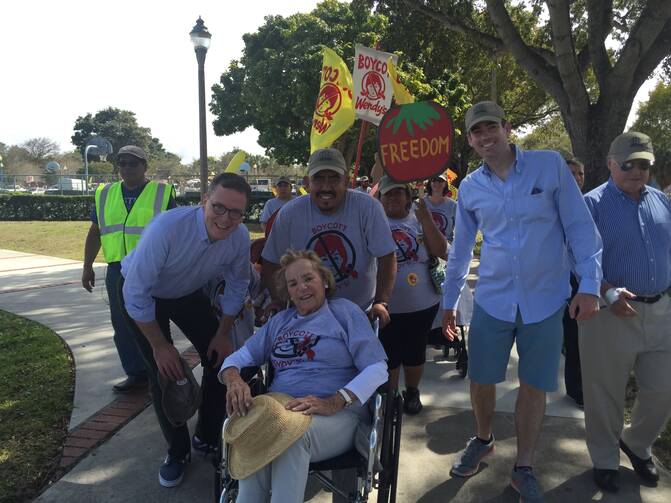 Last Saturday, hundreds of protesters briefly disturbed the conscience of the island paradise of Palm Beach, Fla. Led by Mrs. Ethel Kennedy, widow of the late U.S. Senator Robert F. Kennedy, the peaceful cavalcade wended its way under a brilliant blue sky through a 2.5-mile route, across the Royal Park Bridge and past the trendy shops and coiffured lawns of the 1 percent. At 87 Mrs. Kennedy is as spry and as passionate as ever, doing what she has done for 50 years: marching with the underprivileged, often forgotten constituents her husband championed in his final political campaign.

Wearing a T-shirt emblazoned with a picture of Senator Kennedy and Cesar Chavez, the late labor leader and civil rights activist, Mrs. Kennedy joined the Coalition of Immokalee Workers to protest the low wages and poor working conditions of area tomato harvesters, who earn about 50 cents for every 32-pound basket they fill in the dusty, sweltering south Florida sun. Almost all the workers live below the poverty line. The Immokalee Coalition’s Fair Food Program pressures fast-food companies to add a penny per pound to the price they pay for tomatoes, which means $20 to $150 more in the workers’ weekly paychecks.

McDonald’s, Burger King, Subway and Taco Bell have all joined the Fair Food program; but Wendy’s is holding out, claiming that the farmworkers are not technically their employees and so they shouldn’t have to pay. The coalition does not buy that argument, nor are they buying Wendy’s burgers until that freckled, pigtailed redhead does the right thing. While the boycott has brought needed attention to the plight of workers in Immokalee, a farming town 100 miles from Palm Beach, Mrs. Kennedy and the coalition’s other leaders thought that it would be even more effective to take the fight to the front door, literally, of the chain’s chairman. Nelson Peltz, the billionaire head of Wendy’s, has one of his homes in Palm Beach. “It’s an opportunity for Wendy’s to just join and do the right thing,” said Gerardo Reyes Chavez, one of the day’s protesters. “Instead of that, they punish their own suppliers by not purchasing from them.”

But as much as the protest was meant to pressure Wendy’s and its chairman, the marchers also sought to raise awareness among the folks who were out for their Saturday morning shop. “The people in this town saw for the first time the faces of the people who pick their food,” said Santiago Perez, another of the organizers. “Their reality is tied to our reality, and they can’t continue to ignore us.” If that sounds familiar, it is because it’s a lot like what Pope Francis has been telling us: A more just economic system begins by seeing the person, the one who toils to produce what we consume. When we fail to see the person, our conscience is blind.

Seeing the person who is affected by our choices also makes our choices more manageable. Few of us have the power to change the whole world, but we all have the power to change our part of it, one person at a time. “Each of us can work to change a small portion of events,” Robert Kennedy once said. “It is from numberless diverse acts of courage and belief that human history is shaped. Each time a man stands up for an ideal, or acts to improve the lot of others, or strikes out against injustice, he sends forth a tiny ripple of hope, and crossing each other from a million different centers of energy and daring, those ripples build a current which can sweep down the mightiest walls of oppression and resistance.”

Those ripples of hope rushed the shores of Palm Beach last weekend. Let us pray that the current will carry the cause of justice to every heart. In the meantime, tell the folks at Wendy’s to pay it forward and give an extra buck to the people who make it all possible. It is, quite literally, the least they should do.

Matt Malone, S.J.
@americaeditor
Show Comments (
3
)
Comments are automatically closed two weeks after an article's initial publication. See our comments policy for more.
Charles Erlinger
6 years 10 months ago
For folks who are too old to march, see Gerard O'Connell's column in this issue.
William Rydberg
6 years 10 months ago
Speaking of Justice. We are looking forward to Roman Catholic (jesuit) America Magazine's in-depth analysis of the recent Supreme Court Justice Nominee... Christ is Risen, Blessed be the Holy Trinity
James McParland
6 years 10 months ago
If I were a tomato picker in South Florida living below the poverty line, I think I would look for a different line of work. I might even apply for a job at Wendy's. I'm glad that Ethel Kennedy cares about those folks, but I wonder how much of the Kennedy family fortune she turns over to them when she eats a tomato. The Kennedys can always be counted on to support the poor when it comes to politics, photo ops and publicity, but I haven't seen any of them wearing rags or going hungry lately. Tell us, Fr. Malone. How much of America magazine's annual budget have you set aside for Florida tomato pickers this year ?? If your answer is zero, please explain why you use your publication to attack Wendy's!