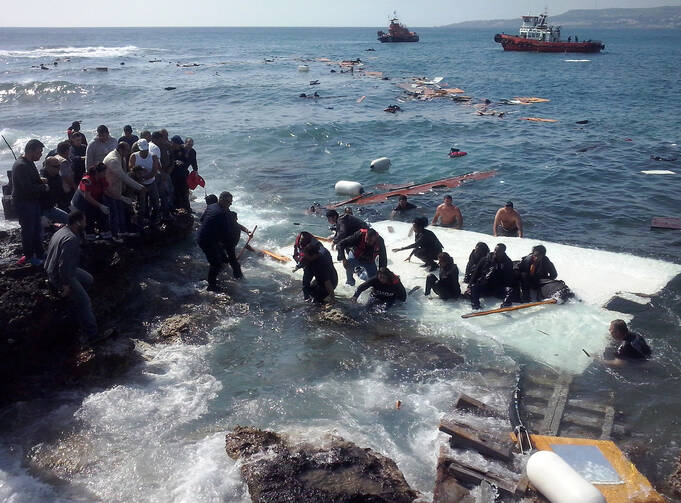 Migrants arrive at Zefyros beach near the coast of the southeastern island of Rhodes, Greece, April 20, 2015. (CNS photo/Loukas Mastis, EPA)

The Trump administration’s weekend decision to withdraw from negotiations on a global compact for the treatment of migrating people was met with expressions of regret by the United Nations and “disappointment” by the U.S. Conference of Catholic Bishops.

With migrants on the move in Africa, out of Syria, Iraq and Central America, the world community has been struggling in recent years with how to humanely address what the United Nations has described as the largest dislocation of peoples since the end of World War II. Now, much as it had stepped away from the global effort to address climate change by withdrawing from the Paris Accords, the United States has removed itself from another international dialogue aimed at tackling a pressing and complex international challenge.

The world community has been struggling with how to humanely address the largest dislocation of peoples since the end of World War II.

Last year, the U.N.’s New York Declaration—a statement approved by all 193 U.N. member states, including the United States under President Obama—proposed that no one country could manage international migration on its own, beginning a process intended to lead to the adoption of a global understanding, principles and protocol on migration in 2018.

The horrific plight of men, women and children often gravely abused or losing their lives during migration attempts across the Mediterranean Sea and elsewhere had been the somber inspiration for the non-binding declaration. It calls on sovereign nations to cooperate to minimize harms—including exploitation and physical violence—perpetrated against vulnerable migrants. The conclusion of the process, according to the United Nations, should mean that “migration, like other areas of international relations, will be guided by a set of common principles and approaches.”

“It is the obligation of nations to assure human rights for all migrants and special protections for vulnerable migrants.”

But as the initial “stock taking” round of negotiations on that compact, slated to run Dec. 4 through Dec. 6 in Puerto Vallarta, Mexico, approached over the weekend, the U.S. Mission to the United Nations informed Secretary General Antonio Guterres that provisions in the New York Declaration were “inconsistent with U.S. immigration and refugee policies and the Trump administration’s immigration principles.”

Archbishop Timothy Broglio, Chair of the Committee on International Justice and Peace of the United States Conference of Catholic Bishops, and Bishop Joe E. Vásquez, Chair of the U.S.C.C.B. Committee on Migration, expressed disappointment with that decision in a statement released on Dec. 5 and encouraged the Trump administration to reconsider its decision.

The United States has removed itself from another international dialogue aimed at tackling a complex international challenge—migration.

In his comments, Bishop Vásquez explained that while Catholic social teaching “recognizes and respects the sovereignty of each nation…to ultimately decide how it will regulate migration into its territory,” the church also has long articulated “that it is the obligation of nations to assure human rights for all migrants and special protections for vulnerable migrants, such as refugees, forced migrants, victims of human trafficking, and women and children at risk.”

Urging the administration to rejoin the negotiation, Bishop Broglio wrote: “With a growing global concern about protracted forced migration situations, the U.N. process provides an opportunity for the United States to help build international cooperation that respects such rights and protections on behalf of those seeking safety and security for their families. Participation in that process allows the US to draw on our experience and influence the compact.”

But a reversal of the decision appears unlikely.

Nikki Haley: “The global approach in the New York Declaration is simply not compatible with U.S. sovereignty.”

In a statement confirming the administration’s withdrawal from the dialogue, Ambassador Nikki Haley, U.S. Permanent Representative to the United Nations, said: “America is proud of our immigrant heritage and our long-standing moral leadership in providing support to migrant and refugee populations across the globe. No country has done more than the United States, and our generosity will continue. But our decisions on immigration policies must always be made by Americans and Americans alone.”

She added, “We will decide how best to control our borders and who will be allowed to enter our country. The global approach in the New York Declaration is simply not compatible with U.S. sovereignty.”

That position was regretted by Catholic Relief Services.

“The crisis of displacement concerns us all and needs an international response,” said Bill O’Keefe, C.R.S.’ vice president for government relations and advocacy, in a statement released on Dec. 5. “This withdrawal does not reflect the values of the American people who want governments to uphold the rights and dignity of migrants, as well as solve the complex problems that force people to migrate in the first place. Fixing the broken global system for managing migration would protect innocent families, reduce human trafficking, and ultimately allow people to choose to stay where they are.”

Stephane Dujarric, a U.N. spokesperson, told reporters on Dec. 4 that the U.S. withdrawal is “a decision which we regret, but there’s still plenty of time for U.S. engagement on this issue.”

“The decision should not disrupt what we see as a clear, unanimous outcome of the New York Declaration for such a global compact,” he said, stressing that it will not be legally binding but will be “grounded in international cooperation and respect of national interests.”

“Since its founding, the United States has been a haven for those seeking to escape persecution and find opportunity,” Mr. O’Keefe said. “We should lead the world to address the needs and problems of migrants in ways that are orderly, fair and compassionate.”