Black Catholics are the past and future of the U.S. church 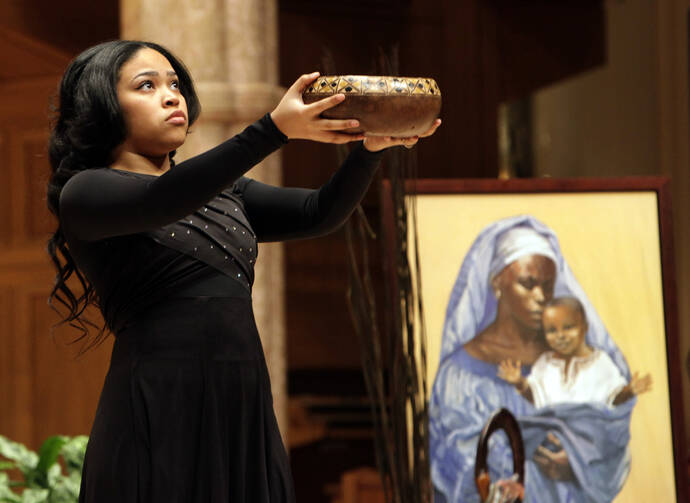 When you think about the history of American Catholicism, images of Irish, Italian, German and Polish immigrant parishes probably come to mind. Think about the future of the U.S. church, and you’ve probably been told it’s Latino. But the story of the church, in the United States—past, present and future—is the story of black Catholics.

On this week’s show we talk with Mary C. Curtis, an award-winning journalist and columnist at Roll Call, who recently wrote about the African-American Catholic experience for America. We ask her how the church can address the sin of racism, about the gifts black Catholics bring to the church and what she thinks about Pope Francis five years in.

In Signs of the Times: An entrepreneurial cannabis company in Canada is selling a unique Advent calendar—and the Archdiocese of Washington holds its ground in the War on Christmas (ads). Cardinal Blase Cupich will spend his first week of Advent in Puerto Rico at the request of Pope Francis. And in international news: The oldest person in France in at 113-year-old nun—who converted at age 27, joined the convent at 40 and did not retire until 104. Welcome to your future millennials.

Next, Pope Francis became the first pope to visit the majority-Buddhist country of Myanmar this week. We discuss the political minefield he faces in addressing the plight of the Rohingya, a stateless, Muslim minority group that the U.S. and U.N. are facing ethnic cleansing. Finally, you’ve probably heard that Zimbabwe’s President Mugabe has stepped down after an (unofficial) coup. You might not know that a Jesuit priest played a key role in the mediation between the country’s longtime leader and the military.

In Jesuitical news, we are giving away books! Get your copy of The Jesuit Post collected writings by leaving us a review on iTunes and then sending us an email with your account name in the subject line!

Finally, while you’re busy with finals and Christmas shopping, Jesuitical will be entering a lighter rotation. You will still find interviews with some amazing people each week this January we’re taking a break from Signs of the Times and Consolations and Desolations to focus on waiting for the birth of our Savior.

As always, we want to hear from you. What’s in your Advent calendar? What’s your favorite Advent song? You can email us at jesuitical@americamedia.org, follow us on Twitter @jesuiticalshow or leave us a comment here.

The weather is getting cooler, so we’re drinking hot toddies.