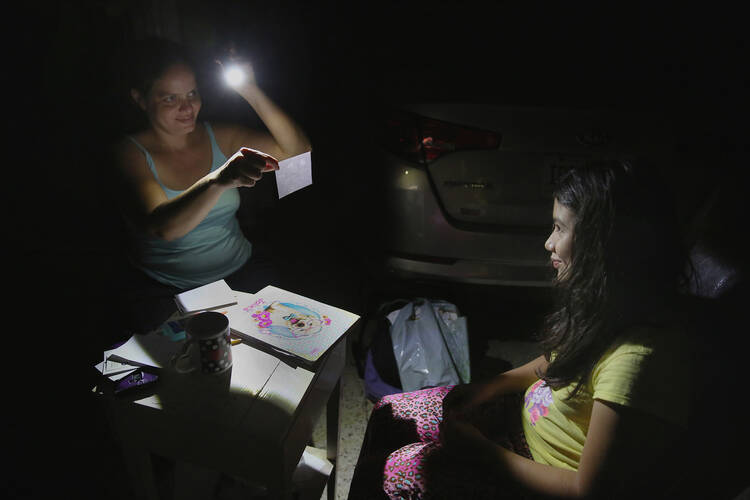 Margarita Rodriguez holds a flashlight as she quizzes her 11-year-old daughter Isel Martinez on homework outside their home in San Juan, Puerto Rico, Oct. 25. Most of Puerto Rico has been without power and water for more than one month after Hurricane Maria devastated the island (CNS photo/Bob Roller).

Cardinal Blase Cupich will visit Puerto Rico early next month at the request of Pope Francis, a visit meant to show solidarity with the island’s residents as they continue to recover from a devastating September hurricane.

“Pope Francis has asked Cardinal Cupich to express his deep concern, as a father would have for his sons and daughters suffering in his family, and to let the people and pastors know that their situation weighs heavily on him,” said a Nov. 27 announcement from the Archdiocese of Chicago.

The cardinal, who is also chancellor of Catholic Extension, will arrive in Puerto Rico on Dec. 3 and depart Dec. 6.

“Pope Francis has asked Cardinal Cupich to express his deep concern, as a father would have for his sons and daughters suffering in his family.”

Earlier this month, Catholic Extension announced that it had donated more than $365,000 to dioceses affected by hurricanes this fall, including locations in Texas, the U.S. Virgin Islands and Puerto Rico. The Chicago-based charity also said it would launch a multi-year fundraising effort to assist Puerto Rican dioceses, modeled on a similar effort following Hurricane Katrina in 2005. That campaign raised more than $10 million for Gulf Coast dioceses.

How a rural Catholic Church is serving survivors of Hurricane Maria in Puerto Rico
J.D. Long-García

As of Monday, authorities in Puerto Rico said that electricity generation was at 58 percent capacity, that 91 percent of people had access to water and that more than 1,100 people remain in shelters.

Maybe Cupich can ask Puerto Rican politicians why the Electric Power Authority was providing electricity free of charge to ice-skating rinks, baseball fields and soccer stadiums, whether the practice of not charging municipalities for electrical service caused a shortage of funds for routine maintenance. While he's at it, he can investigate why one billion dollars from FEMA was not spent on emergency preparedness as it was intended, and squandered.