Pope Francis calls for peace in speech to Myanmar leaders, does not say ‘Rohingya’ 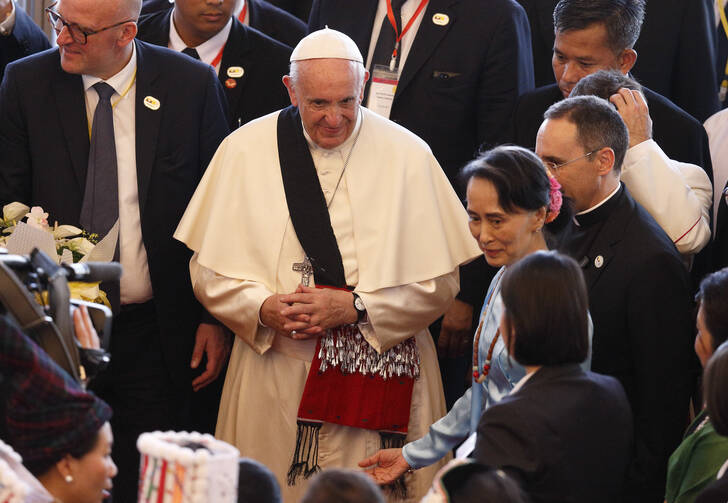 Pope Francis wears a gift as he arrives with Aung San Suu Kyi, state counselor and foreign minister of Myanmar, for a meeting with government authorities, members of civil society and the diplomatic corps at the Myanmar International Convention Center in Naypyitaw, Myanmar, Nov. 28. (CNS photo/Paul Haring)

“The future of Myanmar must be peace,” Pope Francis told the political and civic leaders of this majority Buddhist country in his first public talk since he arrived in this fledgling democracy that has emerged from six decades of military rule but still suffers from internal conflict and human rights violations.

He spelled out clearly what he believes this peace entails: “It must be a peace based on respect for the dignity and rights of each member of society, respect for each ethnic group and its identity, respect for the rule of law, and respect for a democratic order that enables each individual and every group—none excluded—to offer its legitimate contribution to the common good.” 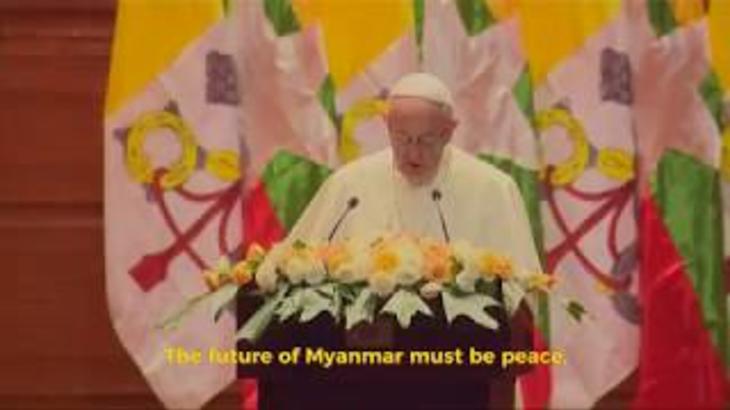 Francis addressed the country’s leaders at the International Convention Centre in Nay Pyi Taw, the new administrative and political capital of this vast country, 200 miles north of the former capital—Yangon. His audience included government ministers, civic leaders, military officials, cardinals and bishops, and about 200 lay people and the world’s media.

In his speech, broadcast on national television, he never referred explicitly to the plight of the Rohingya, the minority Muslim population in Rakhine State, nor did he use the “R” word. Instead, at various times he alluded to their situation as he called for respect for the human rights of suffering groups and in his explicit support for a peace process that is attempting “to end violence, to build trust and to ensure for the rights of all who call this land their home.” The Rohingyas are one of the many groups that call this land their home.

Aung San Suu Kyi, the Nobel Peace Laurate and de-facto leader of this country, warmly welcomed Pope Francis “to this gathering that reaffirms our faith in the power and possibility of peace and loving kindness.” She had visited him twice in the Vatican—in 2014 and last May, and had a third private meeting with him today before this major public event.

“You bring us strength and hope in your understanding of our need, our longing, for peace, national reconciliation and social harmony,” she told him. She expressed her government’s commitment “to continue the task of building a nation founded on laws and institutions that will guarantee each and every one in our land justice, freedom and security.” She recalled that Myanmar faces “many challenges” and each one “calls for strength, patience and courage” in a nation of different peoples, languages and religions. She assured him that her government aims to respect this diversity and build the nation “by protecting rights, fostering tolerance, ensuring security for all.” She said her cherished goal is “to carry forward the peace process” to end all the conflicts and attain sustainable development.

Though she did not say so, the underlying message appeared to be that negative criticism does not help here, it weakens her hand and plays the card of the military, as many people in Myanmar told America in these days.

She explicitly referred to “the situation in the Rakhine” that “has most strongly captured the attention of the world” and made clear that at this critical juncture, it was “the support” of the people “and our good friends” that proved “invaluable” as her government works to address “the long standing issues, social, economic and political, that have eroded trust and understanding, harmony and cooperation, between different communities in Rakhine [state].” Though she did not say so, the underlying message appeared to be that negative criticism does not help here, it weakens her hand and plays the card of the military, as many people in Myanmar told America in these days.

She thanked the pope for his “compassion and encouragement” here and in other situations. Then, recalling that she had received part of her education at St. Francis Convent in Rangoon, she joked that this “makes me fancy that I am entitled to special blessings from your Holiness.” She concluded by telling him, “we wish to leave to the future a people united and at peace; a compassionate and generous people, always ready to hold out a helping hand to those in need.” She thanked him “for praying for our nation and all the peoples of the world” and said, “the road ahead is long but we will walk it with confidence, trusting in the power of peace, love and joy.”

Francis told his audience that “the arduous process of peacebuilding and national reconciliation can only advance through a commitment to justice and respect for human rights.” As the first pope to visit this land, Francis said he had come “to embrace the entire population of Myanmar and to offer a word of encouragement to all those who are working to build a just, reconciled and inclusive social order.”

Myanmar priest: military ‘still in control’—which is why Pope Francis met with them first
Gerard O’Connell

He drew attention to the fact that while Myanmar “has been blessed with great natural beauty and resources,” its people “have suffered greatly, and continue to suffer, from civil conflict and hostilities that have lasted all too long and created deep divisions.”

This was a reference to the many internal conflicts that have plagued this nation of 52 million people, and its 135 ethnic groups, since it gained its independence from Britain on Jan. 1, 1948. The Burmese, the largest of the ethnic groups counting for a third of the population, benefited under the various central governments (which were dominated by the military for 60 years); but not so the other ethnic groups—especially the major ones like the Kachin, the Karen, the Shan and the Chin.

These other ethnic groups demanded greater autonomy, political participation and a fairer share of the natural resources, but the central government did not listen to them and so they opted to take up arms at various times to advance their causes. The inhabitants of Rakhine State too– Buddhist and Muslim alike—have felt greatly neglected by the central government, and the Rohingya have suffered most of all.

Pope Francis was referring to all this when told them that “as the nation now works to restore peace, the healing of those wounds must be a paramount political and spiritual priority.”

He expressed his personal “appreciation for the efforts of the Government to take up this challenge, especially through the Panglong Peace Conference, which brings together representatives of the various groups in an attempt to end violence, to build trust and to ensure respect for the rights of all who call this land their home.”

This was a reference to the peace project launched by the new democratic government led by Aung San Suu Kyi in August 2016, based on the original project started by her father—Aung San, the father of the nation who fought for independence. Her father convened the first Panglong peace conference in 1947 by calling together the leaders of the different ethnic groups with the aim of working out a social order and constitution that would respond to their legitimate needs and demands. He was assassinated and the project was not continued.

Soon after coming to power, Aung San Suu Kyi revived this peace project and her government convened the first Panglong Peace Conference in this city—Nay Pyi Taw, in August 2016—which brought together the civil, religious, ethnic and military leaders to address the many problems, but some of the armed groups—including the Arkan Salvation Army (the armed militant group of the Rohingya) did not attend. A second meeting was held last May and others are planned.

In his speech, Pope Francis said, Myanmar’s religious communities “have a privileged role to play in the great work of national reconciliation and integration.” He emphasized, as he had done early today when he met leaders from the Buddhist, Islamic, Hindu, Jewish and Christian religions, that “religious differences need not be a source of division and distrust, but rather a force for unity, forgiveness, tolerance and wise nation building” and they can help heal “the wounds of those who have suffered in the years of conflict.” By drawing on the depths of their own faith, “they can help to uproot the causes of conflict, build bridges of dialogue, seek justice and be a prophetic voice for all who suffer.”

Myanmar priest: military ‘still in control’—which is why Pope Francis met with them first
Gerard O’Connell

He welcomed the fact that the leaders of the various religions in Myanmar “are making efforts to work together, in a spirit of harmony and mutual respect, for peace, for helping the poor and for educating in authentic religious and human values.” In this way, he said, they lay the moral foundations for a future of hope and prosperity for the inhabitants of this land.

Francis, in his talk, also emphasized the need for the government and others to “invest” in young people and their future through education and job creation because they are the future of this land, but also through education in all “the ethical values of honesty, integrity and human solidarity that can ensure the consolidation of democracy and the growth of unity and peace at every level of society.” This was an important point as more than 50 percent of the population of Myanmar are under the age of 30: the future is in their hands.

Pope Francis concluded his speech by encouraging the Catholics of Myanmar “to persevere in their faith and to continue to express its message of reconciliation and brotherhood through charitable and humanitarian works that benefit society as a whole” and to cooperate with the followers of other religions, and all men and women of good will, “to open a new era of concord and progress for the people of this beloved nation.” He ended with these words: “Long live Myanmar!”

I agree. I’d hoped he, of all popes, could find a way to not suffer from “Pius XII Syndrome” but maybe that’s just not possible. I understand paying serious attention to what local bishops say, but I can’t help but suspect that’s at least partly what transpired in the papal approach to Hitler’s Germany. Disappointed and sad!