How a new Catholic resource is serving those living with H.I.V./AIDS in Britain

How a new Catholic resource is serving those living with H.I.V./AIDS in Britain 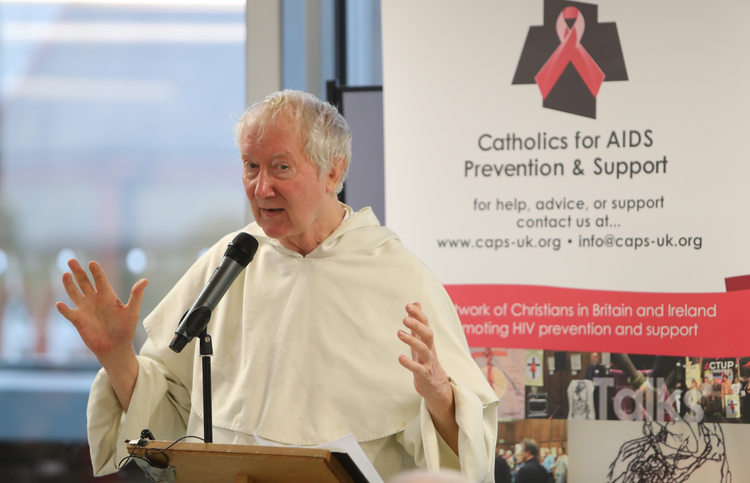 The Dominican writer and speaker Timothy Radcliffe shares his reflections during the launch event for PositiveFaith.net. Photo courtesy of Anthony Kelly.

A recent gathering of activists and supporters celebrated the launch of a new online initiative, Positive Faith (positivefaith.net), in October. This unique resource aims to support people living with H.I.V. and AIDS from a Catholic Christian perspective.

The program offers a series of videos of Christian peer ministry and support for those living with H.I.V. and its consequences. It is the work of Catholics for AIDS Prevention and Support (CAPS), which remains the only group specifically serving Christians living with H.I.V./AIDS in Britain.

In our churches and parishes, there can be an enforced invisibility for people living with H.I.V./AIDS. Myths, misunderstanding and prejudice still abound. This project directly tackles such preconceptions. Because the basis of prejudice in any area of life is usually ignorance, sometimes willful, this new website sets out to meet such fear and prejudice, not with polemic, but with gently told stories of real people.

Christians living with H.I.V. and several pastors who have tried to exercise a Christian ministry in this area frankly and movingly talk about their personal experience in a collection of short videos produced by filmmaker Kip Loades. Christians living with the virus while participating in the life of their parish often face the fear of being discovered—“outed.” But as one reviewer commented, this initiative “tackles prejudice in a warm and embracing way.” Another notes succinctly that it deals with “'real people, real faith, real life.”

In our churches and parishes, there can be an enforced invisibility for people living with H.I.V./AIDS. Myths, misunderstanding and prejudice still abound.

The event to launch this project brought together a number of prominent Catholic figures and pastoral ministers—including Archbishop Peter Smith of Southwark, in South London, who served as chair of the effort—but also welcomed our Anglican sisters and brothers and some of no faith.

In his remarks, Archbishop Smith reminded us of the dramatic final judgment scene of Matthew’s Gospel and how some, in their lifetimes, serve others regardless of provenance or circumstance versus those who fail to do so. His Anglican counterpart, Bishop Christopher Chessun, also commented on the new initiative.

“Produced by people living with H.I.V. from all Christian traditions,” he said, “Positive Faith shows what can be achieved when Christians work together. It also shows us that there are gifts to be brought to the church from those who sometimes feel excluded.”

The Dominican writer and speaker Timothy Radcliffe gave the keynote address at the event, which was held on the rooftop pavilion of Romero House, the headquarters of the Catholic Fund for Overseas Development, the official aid agency for the Catholic Bishops' Conference of England and Wales.

Father Radcliffe spoke of the example of Jesus, who so often embraced people on the margins of society and restored them to the community. In one of the Positive Faith videos, he notes that, at our best, we in the church do the same.

Yet we must ask, do we witness to God’s mercy and Christ’s radical inclusiveness? Father Radcliffe drew on Thomas Aquinas’s insight that “touch is the most human of all the senses.”

“Touch is so important,” he said. “Jesus was the person who reached out to touch people physically. So often his ministry began with touch and being unafraid to let himself be touched and hugged—remember you can see and not be seen, hear and not be heard, but you can’t touch without being touched.”

The chairperson of CAPS, Vincent Manning, told America, “This is not a project that wags its finger at the individual and sends them off to get tested for H.I.V., neither is it about blaming the church for lacking compassion. Positive Faith is about looking forward and offering practical help that empowers Christian people.”

A welcome feature of this initiative is how it foregrounds the frequent lack of understanding about the faith perspective in health care. For all its laudable features, the United Kingdom’s National Health Service does not always recognize and honor the place of faith in healthcare and well-being.

There are hard-working hospital chaplains and chaplaincy volunteers, but patients no longer automatically get to see them. Parish priests often tell the faithful to let the chaplaincy know in advance if they are going into the hospital, in order to secure a visit and the sacraments.

Archbishop Smith said, “This project demonstrates the importance of taking faith seriously in matters of public health. Faith is an essential aspect of health and well-being for many people in many communities. Spiritual health and physical health are connected.”

This concern, according to the creators of Positive Faith, is particularly prominent in the care of people living with H.I.V. And there are signs that some parts of the N.H.S. are recognizing the important part faith plays in how people deal with illness and healing.

Duncan Selbie, director of the government agency Public Health England, speaking at a press conference promoting the Positive Faith launch, said, “Faith plays a critical part for many in keeping well and in helping others.” He said Positive Faith as “a fabulous, pragmatic expression of faith being about life and in this case people living with H.I.V.”

Big Ben’s chimes have fallen silent, and Londoners are in mourning.
David Stewart

And Jim McManus, director of Hertfordshire Public Health and a key project sponsor, during his remarks at the launch, said, “If churches are sometimes uncomfortable about H.I.V., health services still feel uncomfortable about faith. This resource seeks to bridge that gap.”

Current estimates suggest that a little over 100,000 people in Britain live with H.I.V., of whom around half are gay men. Most parishes are likely to have at least a few people living with H.I.V. in their congregations.

Father Radcliffe noted, “A lot of people with H.I.V. must feel you should be very quiet and not make too much of a fuss, but we believe that you should be at the center of the party. We believe it’s Christ who’s living with H.I.V., and therefore he awaits our welcome in all of our brothers and sisters.”

Positive Faith can help H.I.V. prevention efforts within a church begin, using its short videos and training guides for small groups. For those living with H.I.V., it promotes adherence to treatment and medical support. Unlike in so many parts of the Global South, most people living with H.I.V. in Britain can now live healthy active lifestyles as antiretroviral medication is provided by the N.H.S.

Christian narratives around healing and God’s loving acceptance of everyone encourage churches to become more aware and welcoming and to help those worried about having contracted H.I.V. to access testing. Positive Faith should reduce stigma in churches and be a needed pastoral support for Christians living with H.I.V.

Correction (Nov. 21, 2017; 11:57 am ET): The episcopal association of the Catholic Fund for Overseas Development with the Catholic Bishops' Conference of England and Wales was clarified.