As Catalonia declares independence, where will Europe’s nationalist surge lead? 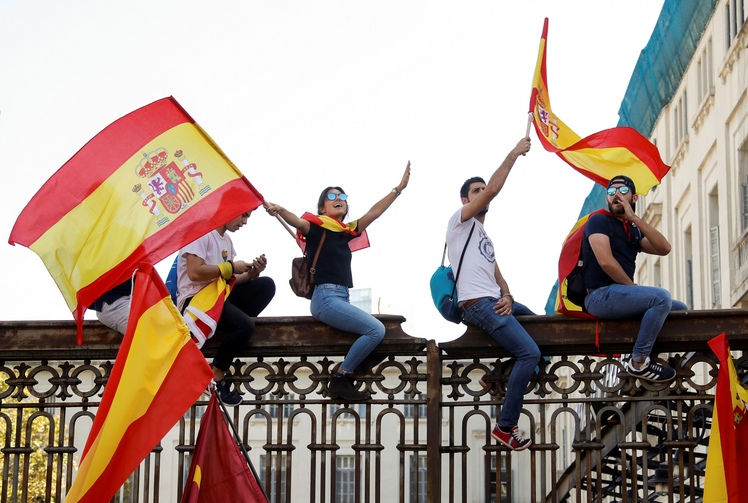 Spain’s prime minister has urged all citizens to remain calm after Catalonia's parliament approved a motion declaring the wealthy region a republic independent from Spain. Prime Minister Mariano Rajoy made the appeal for calm in a tweet minutes after the regional parliament voted for independence in a secret ballot that had been boycotted by opposition lawmakers, asserting that “the rule of law will restore legality to Catalonia.”

Within minutes of the declaration, the Spanish Senate in Madrid approved government proposals to take direct control of the region. The Spanish prime minister now has the go-ahead to apply unprecedented measures including sacking Catalan regional President Carles Puigdemont and his cabinet.

Where will Europe’s surging nationalism land us? Father David Stewart offers this reflection from London.

On the waterfront of Barcelona’s harbor stands a 19th-century, 60-meter-high Corinthian monument to Christopher Columbus, who, after his first voyage into unfamiliar waters, in this city made his report to King Ferdinand and Queen Isabella. Recent events in Catalonia, now moving deeper into the turbulent unknown, not only threaten to drown Spain’s still-young democracy but are a further hazard, if another one were needed, to Europe itself. Catalonia’s tragic autumn of 2017 risks turning nasty as the Spanish central government in Madrid opts for a strategy of confrontation rather than dialogue, while the European Union, flummoxed, tries desperately to look the other way.

Madrid’s stance has continued to be aggressive, if not by means of the ugly crowd-control violence meted out by the Guardia Civil during the recent contentious referendum, but rather by threatening direct rule from the center and a concomitant dissolution of the civic institutions so carefully built up in the agitated territory of the Catalans. The Spanish prime minister’s view is that the Catalan leadership’s defiance is illegal, an assessment echoed by the highest courts and by the king of Spain.

To older generations of Catalans, all this is disturbingly like the Franco years, about which the young know enough also to be alarmed. There have even been imprisonments of activist leaders. The consequences of the Catalan leaders’ formal declaration of independence on Oct. 27 are impossible to predict and may well lead to more violence. Up until the shameful police actions of Oct. 1, this had been a heated but peaceful crisis. There had been fears that the decision of the 52 percent of Britons voting to leave the European Union in the June 2016 Brexit referendum might spur other “Leave” movements in other lands. Former New York City Mayor and business executive Michael Bloomberg recently told the U.K. media that the Brexit vote was the “single stupidest thing any country has ever done” apart from the most recent U.S. presidential election.

Catalonia’s tragedy has become a new kind of threat, not only to Spain, but to the European Union.

The “EU27”—that is, all the member nations other than Britain—have held together in hard negotiations over Brexit, perplexing some in Britain’s Tory government who did not expect these foreign chaps to stand up for themselves. But those European leaders are mostly trying not to slide down the wall in laughter, as they look on at the omnishambles of the British negotiating position and conclude that the mess that the hapless Prime Minister Theresa May has got herself into is the last thing they want for their own nations.

Yet similar disunity could yet come to pass, as ultra-nationalist voter sentiment has not vanished from Europe. It would be foolish to dismiss the nationalist and xenophobic far right in, for example, France, where Emmanuel Macron won this year’s presidential election yet far-right candidate Marine Le Pen polled over 12 million votes. Germany recently saw, for the first time, neo-Nazis elected to Bundestag seats. The great and storied European cities of Prague and Vienna have seen the election of populist anti-immigrant parties, which find European ideals such as integration and multiculturalism unpalatable.

Catalonia’s tragedy has become a new kind of threat, not only to Spain, but to the European Union. While certain loud voices in some E.U. member states still call for their own Article 50 withdrawal from the union, some achieving success with the ballot box, the new structural threat that is beginning to emerge is less that the union will disintegrate and more that its individual member states might.

The European Union was never designed to cope with such a stress test. But several countries have seen their constituent regions begin to do provoke crises—Scotland came close to independence in 2014, and it may again in the near future. The autonomy and independence movements in Flanders and Catalonia have followed, and there are also rumblings in the north of Italy, where recent referenda in both the Veneto and Lombardy regions approved plans, if not for secession, then certainly for much more autonomy.

Energetic, industrialized Milan resembles the wealthy Barcelona area. Some in each region voice unsavory prejudice toward less prosperous provinces to the south. Some feel disinclined to share their prosperity. European ideals of solidarity and the single market’s Four Freedoms (movement of goods, services, capital and people) find little sympathy there.

Europe is constructed around the idea of nation-states cooperating with each other, sharing (not ceding) sovereignty as an exercise in solidarity for the greater common good, but now we might be seeing a flaw in that system. Nation-states that comprise two or more smaller nations insufficiently represent those smaller constituent nations and regions in the larger political/economic reality.

The union was crafted to deal with nation-states rather than peoples. It is as if we have suddenly discovered that self-determination, hallowed in the founding documents of the United Nations, applies to smaller subnational units too. The strife in Catalonia has proved beyond Brussels’ capacity to sort out. Some leaders, such as Britain’s May, have robotically rehearsed standard lines about respect for the law and the courts, seemingly unaware of how those powers are perceived as oppressive by at least some of the Catalans.

If you are an already disaffected Catalan, such statements will not make you feel any better. The Madrid-Barcelona standoff needs third-party arbitration but, so far, no European-sponsored mediation has appeared. If the Spanish government takes over Catalan powers and institutions, as the European Union nervously spectates rather than steps in, few will be inspired to appeal to the founding principles of the E.U., and further fragmentation will continue.

These turbulent nationalist waters could become a deluge. The biggest danger is that the resulting political vacuum will be filled by the cynical, the xenophobic and the hateful.

Catalonian regionalism, and its twin pillar secessionism, was long a feature of politics there before 'Brexit' was even a twinkle in the eye of British voters.

Stop trying to make British voters (who exercised a DEMOCRATIC right in the referendum on the European Union in 2016) feel responsible for the de facto federal mess Spain is now in.

It was a disaster waiting to happen. The regional government of Catalunia during decades indoctrinated the youth against what it perceived as foreign Spanish culture (from taking the controversial decision to ban bullfighting, to the outragous decision of limiting the study of the Spanish language to as few hours a week as possible in public education), even though it is also the cultural heritage of the Catalan people after centuries of forming part of Spain.

Gaudí and Dalí, as different as there were, where both proud of their Catalan and Spanish heritages, and so is the silent majority that has taken to the streets to protest the ideologues in the heart of Barcelona this Sunday (300,000 to a 1,000,000 people).