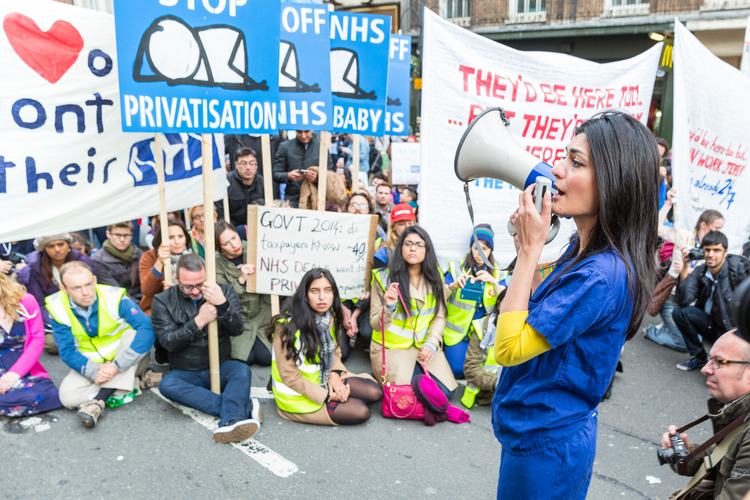 As the Trump administration threatens to unravel former President Obama’s version of accessible national health care, the vaunted National Health Service in the United Kingdom faces woes of its own. Disagreement over public funding levels is the proximate symptom of the N.H.S.’s ailment, while some fear a longer-term plot to dismantle and privatize the service.

In England and Wales, the N.H.S. is underfunded and staff overstretched, but its condition has been made to look critical by right-wing media horror stories about patients left unattended for hours on trolleys in hospital corridors. Care costs indeed are going up. Britain’s aging population has led to a higher demand on services than ever before. Untold are the daily tales of professionalism and healing, among which I count my own experience, that far outnumber the negative reports.

An enforced spell of inactivity and medical recuperation has reminded your correspondent of just how wonderful Britain’s N.H.S. is. I might have thought that to be self-evident. We in the United Kingdom do not understand why so many in the United States think social medicine, free to all, is so awful. Perhaps one has to “be there” to understand what a difference publicly funded health care can make.

For me, being there meant limping to a central London hospital with a sore and swollen knee after a long flight from New York, getting seen to at once in case I had developed a deep vein thrombosis and then, after that concern had been addressed, letting the service’s wonderful professionals take over my care. In the United Kingdom, none of us need worry about pre-existing conditions, insurance policies or credit ratings. The only time credit cards were mentioned was at my discharge: Administrators worried whether I had the means to get a taxi home because the Tube would have been a bit crowded and bumpy for my injury. Already on my phone was an appointment for the next morning for more tests and scans.

Britain’s National Health Service dates from 1948, launched as a key component of postwar social reconstruction by the Attlee government with a budget of £437 million (about £9 billion today or $12 billion). Its architect, the Welsh Labour M.P. Aneurin Bevan, sought to replace a clumsy prewar system that muddled private, charitable—including religious—and municipal services.

General taxation funds the health service; until quite recently there were no charges for patients at all, as clinical need rather than ability to pay dictated treatment. As prosperity gradually, if unevenly, increased across the United Kingdom, a few services began to include nominal charges—prescriptions, for example, have been charged as a flat rate of £8.40 in England and Wales, a little over $11. They are still free in Scotland and Northern Ireland, however. There are also fees for most dental and optical treatments but with many exemptions, such as for the elderly.

There are four systems, one in each of the United Kingdom’s four nations. The annual total expenditure for N.H.S. England, by far the largest of the four, is £122 billion. That would be $162 billion or roughly $3,000 per person in the United States. That figure is less than a third of the annual per-capita costs for U.S. health care. N.H.S. England employs almost 1.2 million full-time-equivalent staff, including almost 400,000 nurses and over 150,000 doctors. Many of its staff, from cleaners to senior consultant surgeons, hail from beyond Britain—in other words, immigrants. The service would certainly collapse without them.

Britain and the United States have plenty in common, but there is much about each that is incomprehensible to the other—presidential primaries and Thanksgiving come readily to mind. But the clearest cultural disconnect appears to be over our national health system, seen as a treasure in Britain yet viewed as an alien, dangerous concept to many in the United States.

This is likely rooted in a fundamentally different understanding of government. The N.H.S. is the most visible example of the United Kingdom’s social contract, blind to class or income level and, in a pair of cherished descriptive phrases, free at the point of delivery and providing care from the cradle to the grave. Here, we have been, mostly, quite happy with government and the welfare state.

There is still private health care in Britain, used by around 8 percent of the population, but often just to supplement N.H.S. care. We moan about the government, of course we do. But there is little of the widespread U.S. suspicion of it.

There is a greater level of trust with government social service, perhaps because we have good cause for it. My knee got fixed, for example. They found a space for me in the X-ray suite at once, apologizing that they could not do an M.R.I. scan until the next morning. A pair of elbow-crutches appeared to help me get home—no charge, nor for the analgesics or a knee bandage. Surgery followed in due course, followed by postoperative care; nothing was stinted.

Even the hospital food, so long the butt of easy jokes, was tasty and nutritious. One evening, I asked the ward nurse how this would all look if the hospital were sold off to a private company. She looked blank in response; the question just was meaningless. But the next day she returned to the topic, admitting that many colleagues and their unions are concerned about just that, noting that bits of the service are already being sold off and that the profit motive is infiltrating health care policy.

Hers is a worrying diagnosis. For all its current troubles, the National Health Service has been a proven benefit. To lose this fundamental dimension of U.K. social life would truly represent a national medical emergency.