Big Ben’s chimes have fallen silent, and Londoners are in mourning.

Big Ben’s chimes have fallen silent, and Londoners are in mourning. 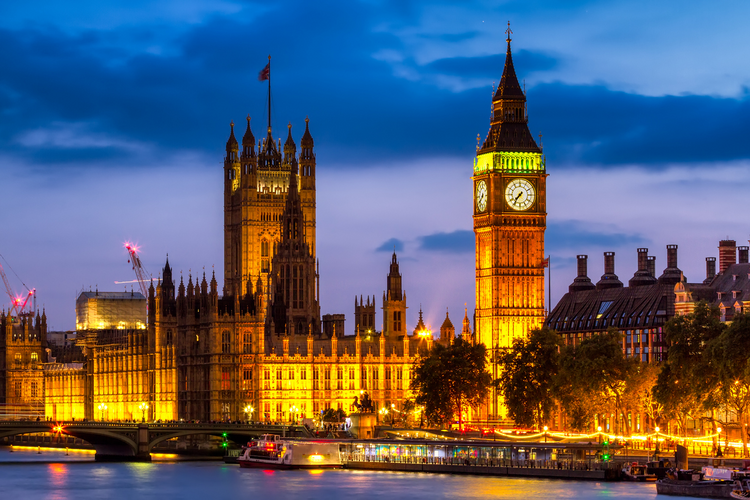 Big Ben has fallen silent. Amid so much uncertainty, people need a touchstone, a lifebelt, something to hang on to. The hourly peals of Big Ben, vulgarly known as “the bongs,” have been one of those touches of certainty, as regular, you may say, as clockwork, familiarity resonating on the hour around a confused world. But now these venerable peals have fallen silent, not to sound again for another four years.

Pity the hapless tourist who stood there in the autumn drizzle of Westminster Bridge or Parliament Square, not taking his eyes off one of the great clock’s four faces, waiting for the 4.2-meter long minute hand to tick toward perpendicular. He will not hear the patiently awaited bongs, nor the four-note theme of the lesser quarter-bells, widely copied around the world from municipal clocks to door-chimes. Once he has wiped the thin mist off his camera lens, he won’t even get a picture of the bell tower, covered now in scaffolding.

The buildings, properly called the Palace of Westminster, that house the British Parliament, are crumbling. The clock’s elderly and rusting machinery was grinding to a standstill. Its wheels and cogs needed urgent repairs.

The clock’s elderly and rusting machinery was grinding to a standstill. Its wheels and cogs needed urgent repairs.

The disappointed tourist will turn to the neat greensward of Parliament Square itself. The eye, or the camera, is caught by the statuary, especially that of wartime leader Winston Churchill frozen by the sculptor in a slightly haemorrhoidal pose. She will spot Abraham Lincoln and Nelson Mandela there, too. But what is this? There is to be a new statue! And it is to be of a woman! And it is to be made by a woman sculptor. Gillian Wearing has designed a statue of Millicent Fawcett, the suffragist leader, whose lifetime of campaigning for justice began with her first speech at age 22. Wearing’s statue will depict Fawcett bearing a sign that reads “Courage calls to courage everywhere.” The plan is to unveil it next February, to mark the centenary of the Representation of the Peoples Act in 1918, which granted the vote to at least some women for the first time.

The bongs of Big Ben heralded news broadcasts on TV and radio for decades. Between the solemn BBC voice announcing the time and the newscast itself, there is a silent gap. Silence is meant to be the antithesis of good radio. Yet BBC announcers specialize in silence and do it very well. Here is no rush; time waits for no one. The bong will sound bang on time, in its own time. Should the announcer be two seconds early, then the silence will be two seconds longer. This has been a solace in a frantic culture that does not do silence; fearing it, we rush to fill it.

The bongs of Big Ben heralded news broadcasts on TV and radio for decades.

Year after year, those bongs were broadcast live on the hour via a microphone hooked up somewhere near the top of the tower. But not now. The full horror of what has been lost became clear when we learned what we now hear are recordings of the clangs of Big Ben. Nothing can be certain anymore. How can we be sure that the hourly peal is on time? Perhaps an inattentive technician might have pressed pause rather than play on the tape machine? Or sleepily, when the 12 midnight peals were due, spilled his coffee over the equipment. As Big Ben becomes post-modern, yet another source of supposed authority has been found wanting.

We who live here accepted that Big Ben needed care and maintenance. Less appreciated was our need for psycho-spiritual care, specifically around issues of identity and loss. Those who like to count themselves as real Londoners, knowing things that visitors don’t know, can tell the difference between fictions about our city and its reality and will often indulge ourselves in snooty dismissal of the errors of mere foreigners.

We take it to be our duty to let such foreigners know no more than is good for them, preferring to roll our eyes as we scorn egregious myths such as the source of that name, Big Ben. Most seem to think Ben is the name of the bell tower, some the clock; but it belongs to the bell, only, weighing in at 13.7 tons. Since 2012 the tower has been known as the Elizabeth Tower, and previously it was simply the Clock Tower, unless you go back a century to when it was St. Stephen’s Tower. “Ben” is generally taken to refer to the 19th-century M.P., one Ben Hall, remembered both for supervising a refurbishment of the Palace of Westminster and for his noteworthy corpulence.

It is still possible for recalcitrant M.P.s to find themselves imprisoned in the tower, should they have breached parliamentary codes. Granted, that has not happened to any of them since 1880, but the small prison is there as a threat. The shambolic government of the moment, marked by misdeeds, scandals and infighting, might suggest a need to expand this gaol.

The tourist might ponder the contrast between the fiascos of our current parliament, symbolized by the silence of Big Ben, and the monument to a more rugged politics, which made a difference and brought justice, that the new statue of Millicent Fawcett will memorialize. Resident and visitors alike, we need to hear Fawcett’s 1913 entreaty for courage to call to courage everywhere so much more than even those familiar chimes of Big Ben.