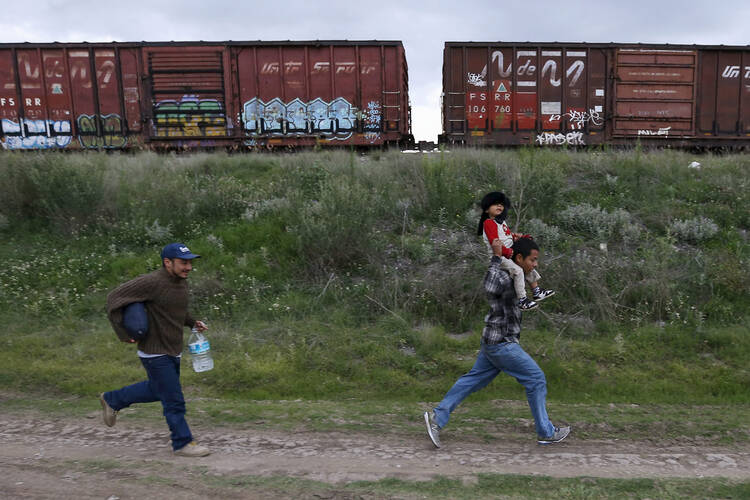 A Salvadoran father carries his son while running in Huehuetoca, Mexico, in June 2015 as they try to board a train heading to the U.S-Mexico border. (CNS photo/Edgard Garrido, Reuters)

The “border wall” between the United States and Mexico, proposed by U.S. President Donald J. Trump, has been part of the political discourse in both countries for months. Catholic migrant rights organizations on both sides of the border, however, say that it is hardly the real issue. They warn civil society and opinion leaders that the “hypnotizing” effect of one of Mr. Trump’s most contentious policy proposals is a distraction from the far more urgent problems affecting migration in the United States, Mexico and Central America.

Speaking at a migration event at the Ibero-American University in Mexico City on Oct. 11, representatives of Catholic migrant rights organizations warned that, while poverty and escalating criminal violence in Honduras, El Salvador and Guatemala are pushing hundreds of thousands of people northward, escalated deportations are tearing families apart in the United States. Mexico, meanwhile, has implemented policies against Central American migrants that are similar or worse than those of its northern neighbor, exacerbating human rights violations and undermining the credibility of its own rejection of the Trump administration’s border policies.

The speakers were all members of the Jesuit Migration Network of Central America and North America, a regional alliance of Jesuit nongovernmental organizations dedicated to the rights of migrants.

Poverty and criminal violence are pushing hundreds of thousands of people northward while escalated deportations are tearing families apart in the United States.

“There’s a lot of talk about the physical wall, the one that Trump wants to build,” said Joanna Williams of the Kino Border Initiative, an aid group based in Nogales, Ariz. “But far more worrying are the less visible ones that are already here but more difficult to see.”

One of those invisible border walls is the stark increase in families who are separated because of stricter deportation policies implemented since Mr. Trump assumed office. According to Ms. Williams, since January there has been a 143 percent increase in parents separated from their children due to deportation.

Mexico, meanwhile, has taken over the U.S. role as the principal deterrent of migration from Central America, according to Arturo González, S.J., Executive Director, Jesuit Migration Service, an N.G.O. based in the southern Mexican state of Chiapas, which borders Guatemala.

“Mexico is also building walls, walls that cause a great amount of suffering,” he said. “It has become the great accomplice of the United States.”

Indeed, Mexican deportations of Central Americans have increased enormously since the country implemented a series of migration and border security reforms in 2014, known as the Programa Frontera Sur. Stricter controls by police and migration officials, checkpoints, and swifter deportations have caused the number of expelled Central Americans in Mexico to skyrocket. Last year alone 188,595 migrants were deported from Mexico; almost 150,000 of them were Central Americans.

According to Father González, the Programa Frontera Sur has exacerbated existing human rights violations of Central Americans in transit through Mexico to the United States, who are targeted for kidnapping and extortion by both criminal gangs and government officials.

“The federal police in Mexico in particular are committing more crimes against migrants,” he said. “We estimate that in 2015 and 2016 alone, they extorted more than $50 million from them.”

As such, he added, the government of President Enrique Peña Nieto in Mexico uses a double standard when it comes to migration: criticizing the policies of Donald Trump while in practice doing the same thing. “To the outside world, it’s a progressive discourse,” Father González said, “while internally we are [experiencing] systematic abuse of human rights.”

Such aggressive policies by the United States and Mexico do little to stem the actual flow of migrants, which continues unabated. Honduras, Guatemala and El Salvador are among the most violent nations in the world, with homicide rates between 33 and 82 per 100,000 inhabitants, according to Ursula Roldán, a scholar at Rafael Landívar University, a Jesuit school in Guatemala City. Considering this violence along with the grinding poverty that continues to plague these nations, many Central Americans traveling northward should accurately be described as refugees.

Indeed, the number of asylum seekers from these three Central American countries is evidence of the problem. Between 2001 and 2016 the number of Central American refugees and asylum seekers has increased by 658 percent, according to Ms. Roldán, to almost 108,000, with another estimated 146,000 with pending requests. And with the United States clamping down on migration, other countries in the region such as Mexico, Costa Rica and Panama have also become destinations.

But governments in El Salvador, Guatemala and Honduras, collectively known as the Northern Triangle, however, fail to recognize the problem, Ms. Roldán argued. “The most vulnerable population is being criminalized, like rural families and indigenous people. Besides of the structural problems we’ve always seen in the region, there are new phenomena like the maras, criminal gangs,” she said. “These people are forcibly displaced, but only one of the three countries even recognizes that there is such a thing as forced displacement.”

All three speakers argued that when governments fail to act, the task of dealing with the migration issue in the region falls on civil society and the church. “Churches and religious groups are among the few destinations where migrants can go to,” Kino’s Ms. Williams said. “There is still solidarity there.”