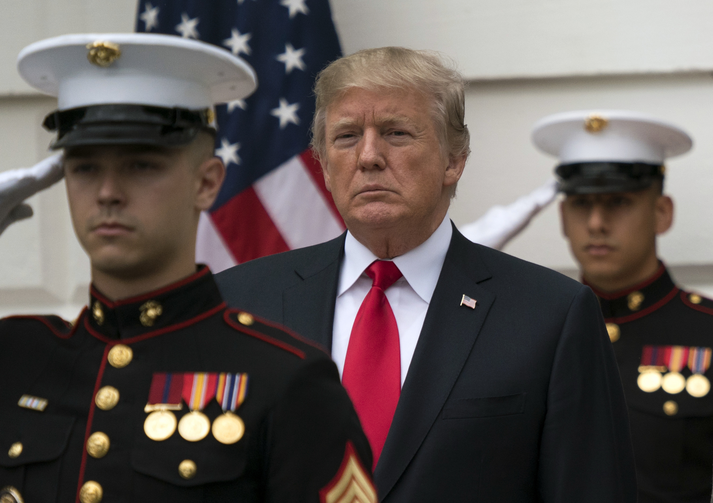 President Donald Trump stands behind and in front of members of a Marine honor guard as he greets Canadian Prime Minister Justin Trudeau and Sophie Gregoire Trudeau as they arrive at the White House on Oct. 11. (AP Photo/Carolyn Kaster)

A statement signed by 751 leaders of Catholic organizations, religious orders and justice and peace committees challenges President Trump’s threat to “totally destroy” North Korea and his apparent intention to repudiate the Iran deal negotiated by the Obama administration.

The president’s threats, according to the statement, “have brought the world to the brink of a nuclear catastrophe and have intensified global insecurity.” The statement, sent to the White House and to Congress on Oct. 12, urges the president to remain on the path of dialogue with both Iran and North Korea, reminding him, “Pope Francis has called for dialogue with North Korea and a rejection of ‘the narrative of fear…and the rhetoric of hatred.’”

Signatories include representatives from scores of religious orders and congregations, Pax Christi USA, the Conference of Major Superiors of Men, the Leadership Conference of Women Religious and Network, a Catholic political lobby.

According to the statement, “Responsible, moral leadership would recognize the Iran deal as an important example of successful diplomacy and conflict transformation that engaged many nations in an arduous, nonviolent process to build trust and avoid military confrontation.” It argues that “similar honest and respectful, if difficult, diplomatic engagement should mark our approach to North Korea.”

The president’s threats “have brought the world to the brink of a nuclear catastrophe and have intensified global insecurity.”

“To threaten the existence of a nation of 25 million people goes against all the values of our Catholic faith as well as the principles of universal human rights on which the United Nations was founded,” the Catholic leaders say. “To ‘totally destroy’ North Korea would be an unspeakable crime against humanity; to threaten such an action is outrageous, reprehensible and beneath the dignity of a leader of one of the world’s great democracies.”

According to these leaders, the Obama-negotiated Iran deal “has successfully reduced the nuclear danger and has opened the door to other diplomatic efforts in the Middle East, including de-escalating the wars in Syria and Iraq,” The Catholic leaders describe the pact as “an extremely important example of effective nonviolent action that has the potential in the long term of leading to just peace.”

The church leaders say the Iran deal “should shore up the commitment of the international community to dialogue and negotiation rather than war as a means of transforming conflict.”

“To threaten the existence of a nation of 25 million people goes against all the values of our Catholic faith.”

North Korea's nuclear weapons development is spooking most Americans, and two-thirds of them say President Donald Trump's war of words with the isolated nation's leader is making the situation worse. Less than 1 in 10 thinks Trump's comments are making it better.

Those are the findings of a poll by the Associated Press-NORC Center for Public Affairs Research, as tensions between the adversaries escalate and North Korea comes closer to its goal of having a nuclear-tipped missile that could strike the continental United States. The poll found that 65 percent of Americans think Trump's comments have made the situation between the United States and North Korea worse, including 45 percent who think he's made the situation much worse. Only 8 percent think he's making the situation better.

White House Chief of Staff John Kelly said on Oct. 12 that the North Korean nuclear and missile threat is "manageable" for now but warned that the isolated nation cannot be allowed to develop the ability to strike the U.S. homeland.

Although President Donald Trump recently declared that his top diplomat, Secretary of State Rex Tillerson, was "wasting his time" trying to negotiate with the North, Kelly said he hopes diplomacy works before the nation can develop its weapons capabilities further.

Kelly's comments at a White House news conference were milder than Trump's recent pronouncements. Over the past three weeks the president has exchanged threats and personal insults with North Korean leader Kim Jong Un, escalating tensions.

Kelly said that Americans should be concerned about North Korea. He said the North has developed a "pretty good" intercontinental ballistic missile capability and is developing a nuclear re-entry vehicle, which is needed for a missile to survive re-entry into the Earth's atmosphere. Then he spelled out a bottom line.

"I think I speak for the administration, that that state can simply not have the ability to reach the homeland," Kelly said.

Reporting from the Associated Press was included in this report.

Couldn't find a further reference for details. Not listed on USCCB site. Wondering whether the president's "my cardinals" signed on.

This description of the current Iran deal reads like a defense of the Reichskonkordat of 1933 while the proposed Korean approach sounds like Neville Chamberlain. Both of those historical "deals" are similar to the present in that the dictator involved was both shrewd and pathological.