‘We will rise up’: Catholics in Puerto Rico maintain hope as groups begin sending aid 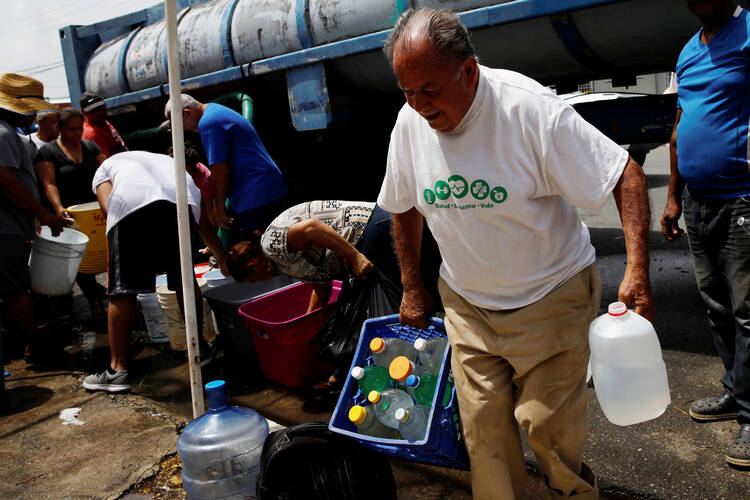 Catholic organizations are mobilizing to assist victims of Hurricane Maria, which has left residents of Puerto Rico and other Caribbean islands struggling to bring back power and locate water and food.

Catholic Extension, a Chicago-based charity that supports dioceses around the country, announced on Thursday that it has donated $350,000 in emergency grants to help dioceses in Puerto Rico resume operations, with the hope that local Catholic parishes can help meet the humanitarian and spiritual needs of those suffering. Some of the money will also be sent to the U.S. Virgin Islands, which is still recovering from when Hurricane Irma struck late last month.

“The purpose of the gift is to try to keep these dioceses going after all the tremendous havoc caused by the hurricane,” the Rev. Jack Wall, head of Catholic Extension, told America. “These are dioceses that are obviously living on a shoestring anyway, among the poorest dioceses we serve.”

Father Wall said that this donation is the first step in helping with relief efforts in Puerto Rico, which he said could take years. Catholic Extension worked with Catholic entities in New Orleans following Hurricane Katrina in 2005, eventually donating more than $14 million in grants.

Catholic Extension, which already had relationships with dioceses and parishes in Puerto Rico, said that they received two requests for help in the days after the storm, no small feat in light of the storm’s impact on the island’s telecommunication infrastructure.

Catholic Extension’s gift is meant to ensure that the spiritual needs of those suffering can also be met.

Aside from the physical needs, Father Wall said Catholic Extension’s gift is meant to ensure that the spiritual needs of those suffering can also be met.

“Spiritual support is also very important,” he said. “The sense of pain, of what do we do next, of where do we go, all those things weigh heavily on people who are feeling hopeless or under tremendous distress. The gift of faith can be a powerful resource in these moments.”

Karla Ortiz, who was born in Puerto Rico and who now works for Catholic Extension in Chicago, told America that she has had limited success in communicating with her parents, who are trying to leave the island for the U.S. mainland. She said the need is great, with friends relaying to her that grocery stores are rationing food and water and people are fighting over ice to keep medications cold.

“The churches serve as the go-to place for poor communities, for isolated communities,” she said. “That’s where they seek help or even just to be refreshed.”

Catholic Charities USA sent $1 million in emergency aid to Caritas Puerto Rico, the Catholic Charities agency on the island, and the Knights of Columbus is including Puerto Rico in its expanded emergency relief outreach to areas hit hard by recent natural disasters. The Archdiocese of New York said on Thursday that Cardinal Timothy Dolan will celebrate Mass in Spanish on Oct. 8 and host a special collection to raise money to help Puerto Rico and Mexico, which is still recovering from a powerful earthquake earlier this month.

Residents of Puerto Rico are struggling with the overwhelming devastation caused by the hurricane, which began tearing across the island early in the morning of Sept. 20 as a Category 4 storm with winds of 155 mph. It destroyed the entire electricity grid while grinding up homes, businesses, roads and farms. At least 16 people were killed. There still is no exact tally of the cost and full extent of the damage, but Gov. Ricardo Rossello says it will bring a complete halt to the economy for at least a month.

“This is the single biggest, major catastrophe in the history of Puerto Rico, bar none, and it is probably the biggest hurricane catastrophe in the United States,” Mr. Rossello said Wednesday as he delivered aid to the southern town of Salinas, whose mayor says 100 percent of the agriculture there was wiped out when the wind tore up plantain, corn, vegetables and other crops.

Puerto Rico was already struggling before the storm. The island has been in a recession for more than a decade, the poverty rate was 45 percent and unemployment was around 10 percent, higher than any U.S. state. Manufacturers of medical equipment and pharmaceuticals, which are the most important segment of the economy, have been shedding jobs for years. Now everything from multinational companies to small businesses and ranches are scrambling to get enough fuel to run generators while their employees struggle to get to work.

Before the storm, the island’s government was in the midst of bitter negotiations with creditors to restructure a portion of its $73 billion in debt, which the previous governor declared unpayable.

Mr. Rossello appeared to warn the bondholders that the storm had made things worse. “Puerto Rico practically will have no income for the next month,” he told reporters.

Scarcity of food, water and fuel is rampant.

Making matters worse for many consumers is the fact that those food stores that are open, typically on reduced hours, are unable to process credit or bank cards or the local system of welfare payments. The businesses are insisting on cash, even though that is technically illegal.

President Trump is set to visit Puerto Rico, a U.S. territory of 3.4 million, as well as the U.S. Virgin Islands, on Oct. 3. He has been criticized for what some perceive as a slow humanitarian response and for spending time tweeting against athletes as Puerto Rico suffered. When he did tweet about the island’s misery, he offended many by bringing up its debt, as well as the island’s pre-existing failing infrastructure.

It took a week for the United States to send a plane carrying 3,500 pounds of water as well as food and other supplies to the island, but the president said, “It’s on an island in the middle of the ocean.... You can’t just drive your trucks there from other states.” A hospital ship also has been sent.

Scarcity of food, water and fuel is rampant. The deaths of two patients in intensive care at a San Juan hospital were blamed on lack of fuel.

Ms. Ortiz, at Catholic Extension, said she received an email from one of her diocesan partners in Puerto Rico with the subject line, “Nos levantaremos,” or, “We will rise up.” She has taken this as a rallying cry.

“There needs to be a message of hope,” she said. “We will rise up. I believe through the church, the people will be able to hear the message that they can rise up.”

I read this to see if there would be a hit on Trump. Sure enough there was based on false information. The hurricane hit on Wednesday. By the weekend there were hundreds of FEMA personnel on the island assessing needs. And important materials were already arriving.

You would think that Mr. O'Loughlin could do a mini google search to find this out and print something different.

Where are the US Bishops' voices? Oh that's right Trump is pro-life.