The Editors: We need to rally around the forgotten Americans of Puerto Rico 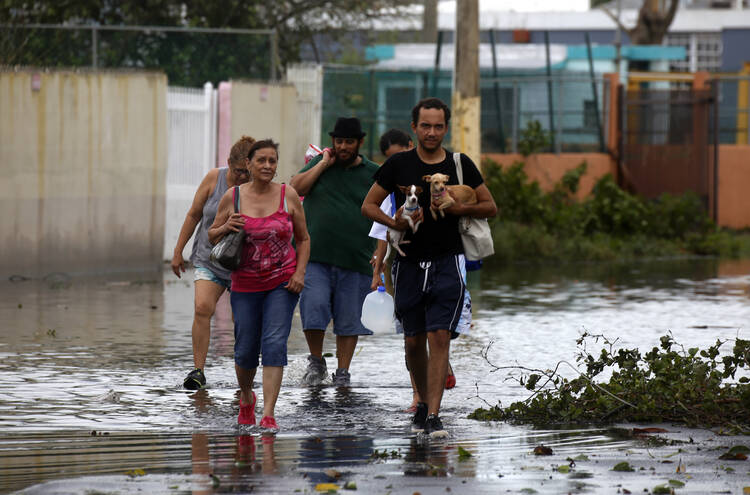 More than a week after being hit by Hurricane Maria, the island of Puerto Rico, home to 3.4 million citizens of the United States, was still crippled by electricity and telecommunications blackouts and was coping with severe shortages of food, drinkable water, fuel and basic medical supplies. But the communications problems were no excuse for the slow response of the U.S. government to the disaster or for the island receiving less news coverage than Florida and Texas did after they were hit with hurricanes a few weeks ago (especially when so much attention was instead given to the incendiary tweets by President Trump over football players exercising their rights of free expression).

The miseries wrought by Hurricane Maria are not dissipating soon. It is expected to take months to restore power, and The New York Times reported that the hurricane has wiped out crops on the island. “There is no more agriculture in Puerto Rico,” said one farmer. “And there won’t be any for a year or longer.”

If Hurricane Harvey had done as much damage to Houston as Hurricane Maria has done to Puerto Rico, we would have seen round-the-clock news coverage.

If this kind of devastation happened on the mainland, the congressional delegation from the affected states would make sure all of us were aware of the needs of their constituents and would press the president and the Senate and House leadership to take immediate action—perhaps by using the leverage of their votes on important pieces of legislation. But Puerto Rico has no voting representation in Congress. Instead it must essentially beg Washington for the billions of dollars in federal disaster relief that places like Texas would demand as a matter of course.

And if Hurricane Harvey had done as much damage to Houston as Hurricane Maria has done to Puerto Rico, we would have seen round-the-clock news coverage. But few major news organizations maintained a full-time presence on the island before the disaster struck. That may explain why, on the Sunday after the hurricane, Puerto Rico was barely mentioned on the political talk shows that help to set the agenda for the workweek in Washington.

Shortly after the hurricane hit, it became distressingly apparent that many U.S. voters need to be reminded that the residents of Puerto Rico are full American citizens. (One poll found that only 54 percent of U.S. adults were aware of this fact.) That means they are entitled to the same response from the federal government as the citizens of New York or Kansas would be if they were visited by a natural disaster on the scale of Hurricane Maria. It also means that if the situation on the island does not improve, residents of Puerto Rico may exercise their right to move to the mainland—where they would gain the right to elect members of Congress.

Hurricane Maria is a reminder that this two-tiered system of American citizenship is neither democratic nor tenable.

Although the United States has long benefited from the geographical reach they provide, its strategic “possessions,” including Puerto Rico, Guam and other territories, have been taken for granted and denied full political representation. Hurricane Maria is a reminder that this two-tiered system of U.S. citizenship is neither democratic nor tenable.

October 5, 2017: This editorial was updated to reflect the extended version which ran in print.

This argument needs more development. As I understand the editors, Puerto Ricans are U.S. citizens living outside the United States. According to the editors, "That means they are entitled to the same response from the federal government as the citizens of New York or Kansas would be if they were visited by a natural disaster on the scale of Hurricane Maria." The alleged entitlement is far from obvious. Can the editors prove a principle of political morality that calls for our treating any place where many U.S. citizens reside as if it were a State, or for our treating expatriate U.S. citizens as if they were actually residing in the United States?

The editors should retract this editorial. It is fake News.

There is a large relief effort going on in Puerto Rico. And planning began before the hurricane hit the island.

The Navy has sent ships but most of the relief is by air. There is an airlift of supplies and repair people. One of the first things is getting potable drinking water and then electricity. The governor of Puerto Rico and the non voting representative in congress have been very thankful for the help.

This is just another fake news hit piece on Trump.

What people in high places are probably thinking but not saying....is that certain areas might be uninhabitable like living too close to the water in New Jersey; Mexico City being on too soft land and near a fault line; Carribean Islands too vulnerable to nature while too dependent on tourism and looking good for tourism at all times. Is an island viable if storm intensity and occurrence is on the increase? Puerto Rico's economy was doing bad prior to this storm. Is it viable at all or should its people be brought to the mainland US.

A tragedy like this unfolds an opportunity for the people of Puerto Rico. Time for The University of Chicago to send a team down there.

I'm sure the capitalist financialist vultures are on the way to buy out the disoriented, desperate victims at bargain basement prices. Maybe after the exodus to the mainland. It's the shock doctrine. It works.

Perhaps the Editors could report on the results of four various Puerto Rico plebiscites held on the statehood vs independence vs territorial status. They are after all somewhat imformative of what the American Citizens living in Puerto Rico think of the Editors position on statehood in this article!! Apparently the majority people of Puerto Rico do NOT concur with the Editors that "their present status is undemocratic and untenable"
Even the leftist Mayor of San Juan , Ms Cruz, is against statehood and in favor of the territorial status quo