Deportees from U.S. to Mexico are strangers in a strange land 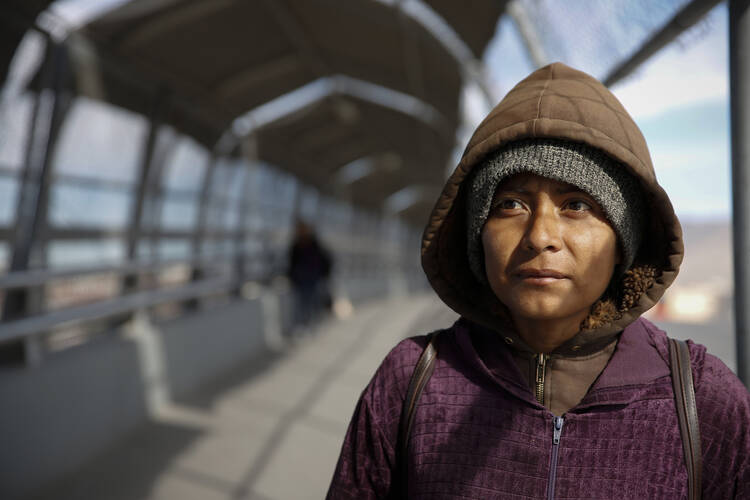 Diana Martinez, who had been deported from the United States, stands on the bridge linking El Paso, Texas, and Juarez, Mexico, in February 2016. (CNS photo/Nancy Wiechec)

When Luis Fernando Ortiz, 22, returned to his grandmother’s house in January, it was not quite how he remembered it. The small, two-story residence in the Mexico City borough of Iztapalapa is in severe disrepair. The yard is full of garbage, plastic toys, pieces of metal and rocks. There are cracks in the concrete wall. Water is available only a few hours each day.

“It’s not much, but it’s my home now,” Ortiz says, surveying the yard. “This is where I have to start my new life.”

Ortiz never asked for this new life, but it was thrust upon him May last year, when police in Kentucky, where had lived with his family for 12 years, knocked on the door. Neighbors had reported a “domestic incident” that was already over when the officers arrived.

“It was just an argument, there wasn’t any physical fighting going or anything, but when the cops came they started questioning me,” Ortiz recalls. “They asked for an ID and Social Security [number]. I didn’t have those, so they arrested me.”

The fear of a sudden check on their immigration status was always in the back of the minds of Ortiz and his family, who arrived in the United States as undocumented migrants when he was just 10 years old. It was part of the search for a new life, a better life, north of the border, and during the 12 years Ortiz lived in Kentucky, things went well. He went to school, got married and had a child, and his two brothers were born in the United States as American citizens.

But when the police found out he was undocumented, the sudden, brutal change came. He was arrested and held in a detention facility for eight months. For a while, Ortiz believed that he would eventually be released. “I was already in the process of getting my papers, since my ex-wife was American and I had spent so much time in the country,” he tells America. “I told the officers that, but they didn’t care.”

On Jan. 24, he was deported to Mexico, back to the country where he was born but that he hardly knew.

“I came back to the neighborhood here in Mexico City where I was a child, but it was really weird, because I don’t really know how this country works,” he says. “All I had when I came here was a plastic bag, and that’s what I had to start my life with. It was rough. I was lucky enough to be able to go back to my grandma’s place, but others are less fortunate.”

Strangers in a strange land. Mexicans who lived most of their lives in the United States and return to a country they were born in but hardly know are increasingly common here in Mexico City. Six months into the presidency of Donald J. Trump and with a White House intent on ridding the United States of as many undocumented migrants as possible, Mexico is dealing with a new phenomenon: integrating deportees who “return” to a country they have little to no knowledge of.

Mexico is dealing with a new phenomenon: integrating deportees who “return” to a country they have little to no knowledge of.

In the first five months of the Trump presidency, Immigration and Customs Enforcement deported, on average, just under 17,000 undocumented migrants per month, or 5,000 less than in the last three months of his predecessor’s term. Migration officials cite backlogs in federal immigration courts as the principal cause for this downturn. But arrests are up, from slightly over 9,000 as a monthly average under President Obama in his last three months in office, to more than 13,000 now.

Moreover, the circumstances of Mexicans sent south of the border have changed significantly in comparison with the previous administration, says Eunice Rendón, a former director of Mexico’s federal Institute for Mexicans Abroad, and who now heads Agenda Migrante, an organization that organizes forums in both countries to discuss the issue of Mexican migration to the United States.

“The number of Mexicans deported under President Obama was higher than it is under Trump: an estimated 3.8 million in the last 10 years,” she tells America. “But it’s important to note that the characteristics of Mexican deportees has changed. Under Obama, the vast majority were people who had just crossed the border and were immediately sent back. Due to Trump’s rhetoric that group [who attempt border crossings] has become significantly smaller, but now we see entire families who have lived in the U.S. that are sent back.”

These new deportees are, like Luis, foreigners in their own country of birth. Most have spent years or even decades in the United States, have completely integrated into American society, often speak better English than Spanish and have difficulties navigating the complexities of Mexican society.

“Reintegrating someone who has lived less than five years in the U.S. is far less of a challenge than someone who has lived there for 40 years or who has spent their entire childhood there,” says Rendón. “They hardly have any family ties here, don’t have the diplomas or labor certificates and often have poor Spanish language skills.”

Such is the case with Ortiz. “It’s weird; it’s a different world here. I remember it as a kid, but it’s pretty hard coming back,” he says. “I know nothing about Mexican history. I know American history but nothing about the country I live in now. My Spanish isn’t perfect either. I struggle with it sometimes.”

To further complicate things, deportees who spent most of their lives in the United States suffer discrimination in Mexico. While they sometimes felt like second-class citizens north of the border, people here often do not consider them “real” Mexicans. Ortiz told America that he, too, feels that he does not fit in with the society where he was born. With his manner of dress and speech and his tattoos, he looks and sounds different from inhabitants of Mexico City of his age.

“People here look at me as if I’m weird. In the U.S. I was discriminated against because of the color of my skin, but I come here and I don't fit in either,” he says. “People criticize me because of how I dress, because of how I talk. They look [at me] like I’m not from here. Most think, ‘Go back to America.’”

“People here look at me as if I’m weird. In the U.S. I was discriminated against because of the color of my skin, but I come here and I don't fit in either,”

Critics say the Mexican government has been slow to act on the influx of returnees like Ortiz. In March, President Enrique Peña Nieto signed a bill into law that aims to facilitate their integration into the country’s education system, but with sluggish economic growth and with approximately half of the country’s population living at or below poverty levels, Mexico is still relatively ill-equipped to reintegrate people like Ortiz.

In Mexico City, hundreds of deportees have therefore come to depend on the services of nongovernment agencies like New Comienzos, a group founded two years ago by Israel Concha to help returnees navigate the complex new world that is Mexican society. New Comienzos helps them get their paperwork in order, gives Spanish classes and helps them find jobs—especially in call centers, where bilingual deportees have the skill sets to immediately find work.

“It's very difficult to come back. Even though we were born in Mexico, we grew up in the U.S and we believed in American culture. It's a different system here,” Concha, 38, tells America.

Concha was himself deported from the United States in July 2014. He had lived more than three decades in Texas after his parents brought him to the United States when he was just 2 years old. He ran a successful business renting out limos, shuttles and taxi cabs, in which he even employed U.S. citizens, when he was arrested for speeding and eventually sent to Mexico.

“For a lot of us, it’s a difficult situation. From the issue of crime and safety, which is worse here in Mexico, to not being able to prove your citizenship,” he says. “You can’t prove your address, and you need to bring two witnesses to arrange paperwork, but you don’t know anyone here. You need psychological assistance. Many people were detained and they have been away from their families for a long time. There are so many services they need.”

For many deportees, Trump’s aggressive anti-immigration policies now mean that the American Dream is a distant one, and they fear that a more difficult life in Mexico is their immediate future. Ortiz, who found a job with help from New Comienzos, says he is aware that he may have to stay in Mexico indefinitely. Despite daily, tearful conversations with his family in Kentucky, he hopes for an eventual bright future here.

“I want to do something for myself, maybe start a business, finish college and just prove to people here that, no matter where you are, you can still be somebody,” he says. “It’s harder here to get an education and to get a good job, but I do see my future here. Maybe, later on, I'll be able to go back and apply for citizenship in the U.S., but right now with Trump I don't see that happening.”

He sighs again. “It's crazy how one person with that kind of power can change so much.”

Sins of the parents bearing fruit. Brutal. IMO, if this story is true, the man should be given some humanitarian easement and consideration for the "good time" he's done in the USA.